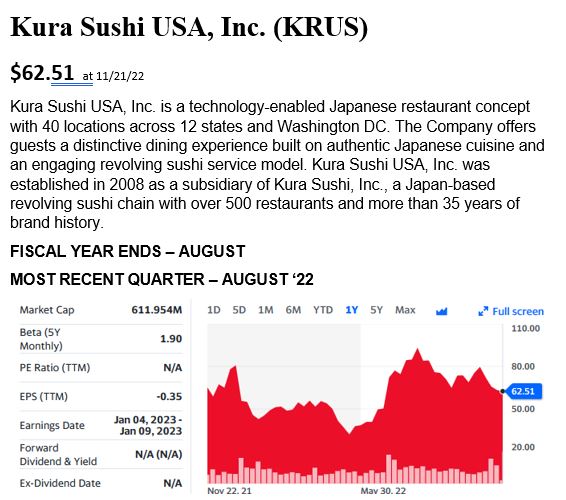 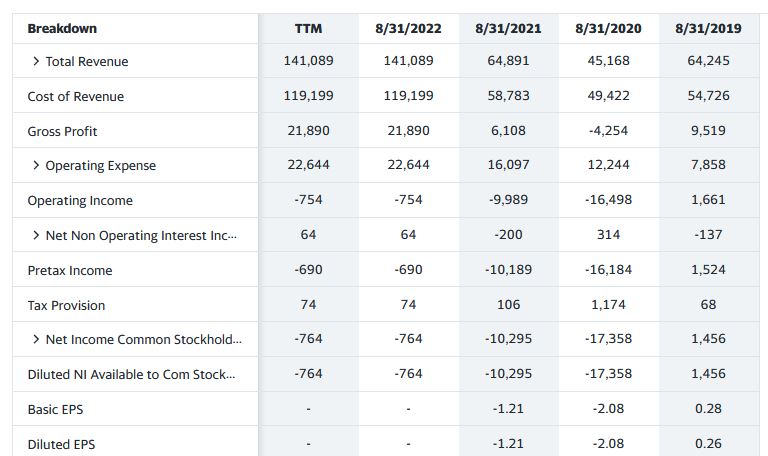 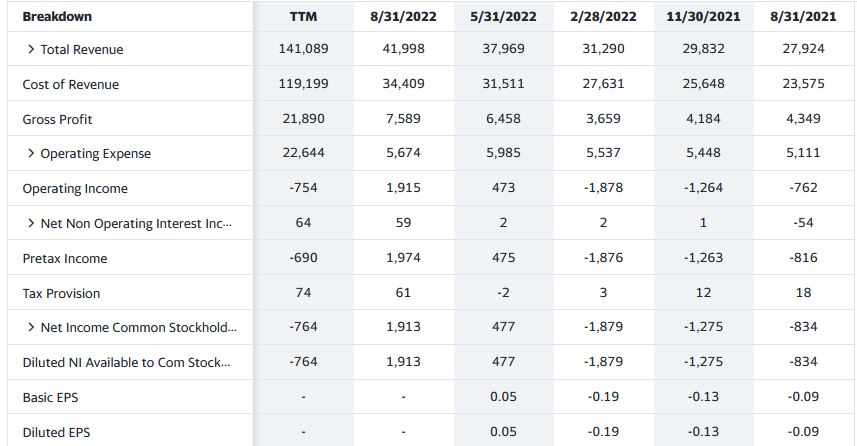 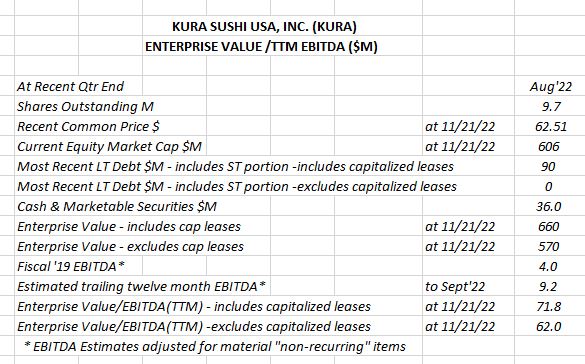 THE WEEK THAT WAS, ENDING 7-15, TWO DOWNGRADES – with relevant transcripts

THE WEEK TO COME:

DOMINO’S (DPZ) will report BEFORE THE MARKET OPENS

BJ’S RESTAURANTS (BJRI) will report AFTER THE MARKET CLOSES

THE ONE GROUP HOSPITALITY (STKS)

The links below take you to the updated corporate descriptions, which includes a link to the transcript of the most recent conference call.

CONCLUSION: Kura Sushi USA is doing well and, supported financially by existing cash and a debt free balance sheet, should be able to move steadily along their long term growth trajectory. The concept is truly differentiated, and the degree of automation allows them to deal with the biggest single problem in the restaurant industry, namely wage inflation, in turn allowing them to maintain the price/value equation in the eye of the consumer. As far as KRUS, the stock, there is no question that it is very highly valued. With that in mind, it’s not a question of whether this is a worthwhile long term stock holding, but at what point the fundamentals sufficiently catch up with the stock price to provide an attractive reward/risk equation.

THE COMPANY: Kura Sushi USA, Inc. (KRUS), based in Irvine, California, is a majority owned subsidiary of Kura Japan, which now operates over 400 locations. Kura, USA opened its first restaurant in Irvine in 2009, and operated, as of 12/31/19, twenty four locations across five states. Thirteen were in California, eight were in Texas, one each in Georgia, Illinois, and Nevada. Kura’s concept is technology enabled, providing a unique dining experience by way of a revolving sushi service model. Their cuisine encourages a healthy lifestyle by way of providing ingredients free of artificial seasonings, sweeteners, colorings or preservatives. KRUS came public on 7/31/19, selling 3.34M shares at $14.00/share.

Operating highlights to this point include: High sales per square foot, positive same store sales comparisons in 12 out of the last 13 quarters, success in reducing labor turnover at both crew and management level, improving technology applications within the restaurants, and successful implementation of a loyalty rewards program.

KRUS has a number of long term strategic advantages, including (1) A fundamentally differentiated concept, that provides value for the dining dollar, a dining “experience” for guests rather than just a “fuel stop” (2) An appeal to young and old. (3) Sales per square foot  well above average in the restaurant industry (3) A high degree of automation, which allows for control of the labor content, crucial in these terms of wage inflation (4) Flexibility of store size, which allows for advantageous selection of premier locations (5) A debt free balance sheet, and a strong Japanese parent company  (6) A sound long term expansion strategy that includes 20% unit growth overall, including filling in established foothold markets and entering new markets on a 50/50 basis. The Company estimates that existing markets can hold 87 more locations, with 184 more possible in new states.

UNIT LEVEL ECONOMICS COMMENTARY: while the AUV was flat year to year, the 6.2% increase in same store sales, a shown below, was driven by an increase in average check and traffic. The decrease in CGS from 34.0% to 32.8% of sales was due to an increase in menu prices. The slight increase in labor costs to 31.0% of sales was due to additional labor costs related to openings. Occupancy & Other expense increased primarily due to higher rents and pre-opening expense at new locations. Other Store Expense was up due to the opening costs of new restaurants, including credit card fees, kitchen supplies, advertising and promotions, royalty fees (0.5% of sales to Kura Japan) and utilities.  New restaurants are planned to be in the range of 2,500 to 4,500 square feet, cost $1.8-2.0M, and do average AUVs of $3.5M

DEVELOPMENT COMMENTARY: In Fiscal ’19 four of the six new units were in California, one in Schaumberg, IL and the other in Las Vegas, NV. Six new locations will have opened in the  FY  8/31/20. Under construction currently are Fort Lee, NJ, Glendale, CA, and Koreatown (L.A.)CA.  Bellevue, WA, Washington, DC, and Sherman Oaks, CA will follow this year as well. Over the long term, 20% unit growth (for the five year period starting ’19) is planned, a rate we consider prudent and sustainable. The $33M of cash on the balance sheet (which would pay for 16-17 stores), with no debt and $61M of equity, as of 11/30/19 should allow for this steady rate of expansion.

SAME STORE SALES COMMENTARY: Comparable sales represent restaurants open for at least 18 months prior to the start of the accounting period, including those temporarily closed for renovations during the year. The sales growth measure excludes the Laguna Hills, CA locations, which closed during fiscal 2018. See below for Q1’20 sales commentary.

RECENT DEVELOPMENTS: Per 11/30/19 report and conference call – Comp sales were up 7.9% in Q1’20, including 3.1% price, the twelfth quarter out of the last thirteen that comps have been up. 14 locations were in the comp base in Q1. No new restaurants were opened in Q1. Subsequent to the end of the quarter, one restaurant has been opened, in December, in Katy, TX. Within the existing locations, four are located in shopping centers that are not yet fully occupied, expected to do well once that takes place, which has inhibited results to a degree. Adjusted EBITDA, in this second reporting quarter after going public, was ($0.1), compared to $2.5M in Q1’19. Restaurant level EBITDA was $3.0M vs. $2.5M, down 120 bp to 17.5%. The decrease was primarily due to increases in occupancy and related expenses (up 140 bp to 8.3%) and labor related costs (up 150 bp to 32.3%).  Waste reduction has helped CGS (down 100 bp to 32.6%) and slightly higher menu pricing has not affected traffic. The increase in labor was due to 4 new units built in California in the last 12 months and planned wage increases in some stores. G&A costs were increased from $2.1M to $3.3M, which was largely due to $900k of public company costs. Absent that, G&A would have obviously been up by $300k, primary driven by employee compensation. As stated on the conference call, “incremental G&A costs in Q1, that will not carry over for the remaining quarters, allow for “Adjusted EBITDA in Q1 of ($143k) vs. $500k a year ago. The decrease was primarily due to the front end weighted distribution of public company costs”.

The response to the rewards program that was rolled out in August, offering guests a $5 coupon for every $50 they spend, has generated a higher average check as well as increased frequency of visit. A new Touch Panel drink ordering system is being tested in the Little Tokyo restaurant. Touch Panel food ordering is already in place at all stores. In terms of profitability in the balance of the year, Q2 is expected to be approximately breakeven, profitability “steadily improving” in the back half of the year”.

Guidance for the Y/E 8/31/20 includes expectation of a net loss in Q1, near breakeven in Q2 and steady profitability improvement in the second half of ’20. That margin improvement is expected to come from pricing, technology driven efficiencies, better labor control and reduced waste.

For the full fiscal year, 2020, ending 8/31, the Company affirmed guidance of:  sales of $84-87M, comp sales growth of 2-4%, restaurant level EBITDA margin of 20.5-21.5%, and adjusted corporate EBITDA margin of 9-10%, with 6 new restaurants opened, 2 in each of Q2, Q3 and Q4.  Remodels, to match the new store design which started in Sacramento and require only 10 days to complete at the smaller stores, has begun, and 2-3 will be done each year. Management is “pleased with the result” of the first remodel, in Little Tokyo (L.A.).

There is lots more detail to follow in the next week or so, but it is safe to say that it is still tough out there in restaurant/retail land. Labor costs continue to be a huge issue, food delivery is a major subject and already in a shakeout phase, traffic is flat to down (mostly down) at almost all restaurant chains, especially “dine-in”. Since costs are rising and pricing power is limited, there is no margin relief to come at restaurant chains, unless they are recovering from depressed results, which is in fact the case in a few situations. We will be doing updates on many of the publicly held chains that will provide more details.

On the plus side, it is always interesting to hear from the chains that present on “privately held day”.  While many of the publicly held chains are “mature” and coping with the inevitable pressures of maintaining their original “cultures”, it is always exciting to hear about the success at younger companies, still run by their energetic founders. That’s not to say that all the public companies have lost that youthful enthusiasm, but the job has inevitably become more complex and multi-dimensional.

As far as our coverage is concerned:

Among publicly held companies, we expect to do NEW writeups on Noodles, One Hospitality, and Denny’s.

The section on our website devoted to “Up & Comers” is largely an outgrowth of exposure at ICR and those articles get more readership because we all hear from the public participants every ninety days.

Our previous writeups on &Pizza, Barcelona Wine Bar (which is part of Barteca, now owned by Del Frisco’s), Fitlife Foods, and Fogo de Chao (which was public a couple of years ago) can now be updated.