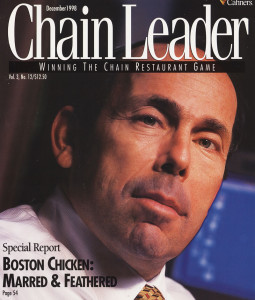 Roger is an investment professional with over 4 decades of experience specializing in chain restaurants and retailers, as well as macro-economic and monetary developments. After earning a BSME from R.P.I. and MBA from Harvard, and working as an auditor with Price, Waterhouse, he began  following the restaurant industry as well as the gold mining industry. While he originally followed  companies such as Church’s Fried Chicken, Morrison’s Cafeterias and others, over the years he invested in companies such as Panera Bread and shorted companies such as Boston Chicken (as described in Chain Leader Magazine to the left) .

In the late 1970s, Roger left Wall Street to build and operate a chain of 15 Arthur Treacher’s Fish & Chips stores in Canada. In 1980 he returned to New York, and for the next 13 years worked at   Ladenburg, Thalmann & Co., Inc. where he managed the Lipton Research Division, specializing (naturally) in the restaurant industry. While at Ladenburg he sponsored an annual Restaurant  Conference for investment professionals, featuring as keynote speakers friends such as Norman Brinker (the “Babe Ruth” of casual dining) , Dave Thomas (Wendy’s) , Jim Collins (Sizzler & KFC), Jim Patterson (Long John Silver’s), Allan Karp (KarpReilly) and Ted Levitt (legendary Harvard Business School marketing professor, and author). Roger formed his own firm, Lipton Financial Services, Inc. in 1993, to invest in restaurant and retail  companies, as well as provide investment banking services. Within the restaurant industry he has served on the Board(s) of Directors of both publicly held, as well as a private equity  backed casual dining chains. He also serves on the Board of a charitable foundation affiliated with Israel’s Technion Institute.

The Bottom Line: Roger Lipton is uniquely equipped as an investor, investment banker, board member and advisor, especially related to the restaurant, franchising, and retail industries.  He has advised institutional investors, underwritten public offerings, counseled on merger transactions, served on Board(s) of Directors, public and private, been retained as an expert witness, conducted valuation studies and personally managed a successful  investment partnership, all specializing in restaurants/retail.  He has studied great success stories over the last 40 years, from McDonalds to Shake Shack. Even more important he has watched scores of companies stumble and sometimes fail. It is this insight that Roger brings to this website. His   post, dated 9/30/15, called “VISIT THE GRAVEYARD…..” lists a long list (though only a sample) of companies that have come and gone over the length of Roger’s investment career. This  website is his platform for conversing with other professionals in the field, improving his own investment results, and remaining well informed on industry issues.