The financial music is playing so the dancers are taking the floor. The Cost of Capital is negligible so it makes compelling sense to sell (if you can) a small percentage of your company, provide working capital and/or pay off existing debt. Among restaurant companies that have been public for years, Shake Shack (SHAK) sure looks wise in retrospect when, in March of 2021, they sold $225M of seven year ZERO COUPON convertible notes. Their stock (now $84) was trading at about $120 and the notes are convertible at $170/share. At the conversion price, the value would be 269x Shake Shack’s previous high earnings, $0.63 per share in 2019. Back in May we called it the Financial Transaction of the Year in our monthly column within the Restaurant Finance Monitor. Shake Shack’s still-nosebleed valuation (at $84) has now been joined by Dutch Bros (BROS), a fine company, having more than doubled from the IPO price, which is now selling at about 75x the trailing twelve month EBITDA. A technology platform serving the restaurant industry, Toast (TOST), is trading at about $50 (up from the $40 IPO price) and, while growing at about 100%/yr., is valued at about twenty five times trailing twelve month sales. There are no earnings yet. Does anybody else remember 1999-2000?

THE DEAL, and the valuation – The terms of the offering have not been set, nor the percent ownership by the current holders versus the public, a major objective of the IPO is to pay off a material portion of the current $470M in debt. The expected IPO valuation is about $1.4 billion.

Originally founded in 1963 in Chicago, purchased in 2014 (with 38 units) by Berskshire Partners, Portillo’s has become an institution in that market, selling a diverse menu featuring Chicago style hot dogs and sausages, Italian beef sandwiches, salads, burgers, crinkle cut fries, homemade chocolate cake and milkshakes. As of 6/30/21, there were 67 company operated locations within nine states (44 in IL, 6 in IN, 4 in AZ, 1 each in Iowa and MI, 3 in FL, MN & WI, 2 in CA). In terms of unit growth: since 2015 compound annual growth has been about 9.3%, and the long term objective is about 10%. Nearly all the restaurants have double drive thru lanes as well as dine-in and carryout service. The restaurants average 8,000 square feet and the new prototype is 7,200-7,800 sq.ft.  Per the prospectus: “Our near-term restaurant growth strategy is focused on leveraging our proven unit economic model primarily in adjacent and national markets outside Chicagoland with favorable macro-economic tailwinds where we already have a presence. We will also add select new restaurants in the Chicagoland market.”

AUVs were $7.9M in the TTM ending 6/27/21 with a restaurant level Adjusted EBITDA margins of 28.6%. The initial investment to build a new restaurant ranges from $4.5-$5.0M, excluding pre-opening expenses.  If we assume a cash cost of $5.0M (the high end), and a store level EBITDA of a conservative 25%, $7.9M of revenues generates almost exactly $2.0M, or an obviously handsome 40% cash on cash return.

Revenues/Unit and (predictably) Operating Margins are materially less outside of “Chicagoland”. 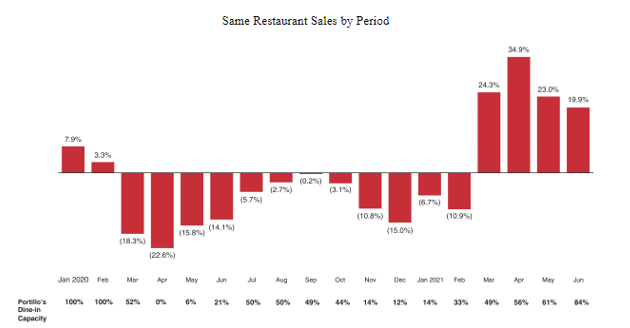 Michelle Hook, CFO, has been at Portillo’s since December, 2020. Her previous position was VP of Finance at Domino’s.

Sherri Abruscato, Chief Development and Supply Chain Officer, has held her current position since August 2014, and has been with Portillo’s in various positions since 1983.

Derrick Pratt, COO, joined Portillo’s in May, 2021. He was previously in a variety of executive operational positions at Starbucks.

First. It is worth noting that the class A common shares that the public owns will have inferior voting rights to the class B shares owned by Berkshire Partners. This is becoming commonplace within recent IPO structures. After all, the public can’t be expected to have equal voting rights (per share) as the previous owner. It is privilege enough to be able to participate in the future growth of such a promising company, even if the valuation is a multiple of what used to be considered reasonable. Since the 2020 Adjusted Corporate EBITDA was $88M, and $51M up from $38M, in the first six months of ’21, the contemplated IPO valuation of about $1.4 billion looks to be  about 14x  the current run rate of  corporate Adjusted EBITDA. We consider this to be relatively reasonable, at least in comparison to the examples (BROS, TOST, and SHAK) provided above. However: (1) the currently contemplated IPO valuation (at $17-20/share) could still be changed,  the stock could go to an immediate premium, as with BROS and TOST, or a discount, as in the case of Krispy  Kreme (DNUT) so this valuation may be moot for most of us (2) Units outside of Chicago have been materially less profitable than those at home, with good but not great unit level economics, and that could come increasingly into play over time (3) Store level margins, now at industry highs and all time records for PTLO, are unlikely to expand further. We, therefore, do not expect EPS  to expand much more rapidly, possibly materially less, than the 10% unit growth rate.  We therefore consider the fundamental risks to be at least real possibilities, so would not be inclined to own PTLO at “any price”. As Warren Buffet famously suggested, “you don’t have to swing at every pitch.”