Prologue: We know FOGO because we’ve been to Fogo De Cha’o “Brazilian Steakhouse’ many times and the Company was publicly traded from 2015 to 2018. It was owned during that period by Thomas Lee Partners, who had purchased the chain from a Brazilian private equity firm in 2012. Though the unit level economics at the time were among the best in the restaurant industry, the stock was consistently undervalued, probably because the Brazilian locations, about 15% of revenues at the time, did poorly, unit growth was modest and Lee’s potentially large sale of stock was a constant overhang. Affiliates of the Rhone Group (“Rhone”) took FOGO private in early 2018 and have since owned 99% of the equity. A great deal of progress has been made, even through the course of the pandemic, and FOGO has emerged well positioned for long term growth. They filed two days ago a preliminary S-1 for an IPO so the offering is no doubt a couple of months away.  The following relatively brief discussion is designed to promptly present our initial reaction to the offering, which will doubt be expanded upon before and after the deal.

The filing calls for $100M but that is just a “place holder”. It is unclear how much of the offering will be for the 99% owner, “Rhone”, the proceeds to be used to refinance a major portion of the $344M of debt. Our guess is $200-300M will be raised, depending on the valuation and the institutional response to the deal, perhaps at a valuation of $1.2 -$1.5 billion, which would be about 12-15x the approximate $100M run rate of EBITDA. Have to admit: we could be materially low in terms of our valuation “suggestion” in the light of the current speculative tone of the marketplace, though a lot can happen either way over a couple of months. For example: Sweetgreen (SG) was priced this morning above the range (with a very high $3B valuation) and it has run up 50% from there. At the same time, Portillo’s (PTLO) after increasing from its $20 IPO price to over $50 (something like 30x their EBITDA run rate), sold off over 10% yesterday because their first reported quarter as a public company was uninspired.

There are currently 60 Fogo locations, 53 of which are company owned, with 46 across 21  US states, DC, and PR. The concept provides Brazilian family-style dining, the Churrasco experience offering premium cuts of grilled meats, carved tableside by gaucho chefs, all at a relatively modest fixed price. The dining experience is differentiated from other dining possibilities, as the gaucho chefs (actually overseeing the cooking process) also engage with the guests’ table, customizing the pace, the portioning and selection, and maximizing customer satisfaction. The existing locations are almost all 10,600 square feet on average (more on this later) and the average unit volumes (AUVs) are comparably high at $7.9M over the last twelve months (TTM). The price-value equation appeals to a broad range of demographics, with high-growth Millennial and Generation X representing 79% of the guests. 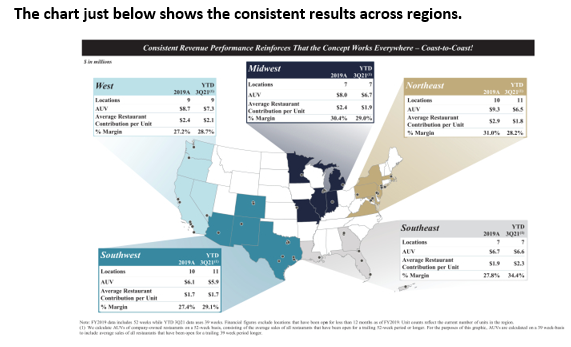 The menu options have been expanded, with a vegetarian option, ala carte seafood entrees, appetizers, a Market Table only option and a selection of sharable plates. The Company has built upon dayparts such as weekday lunch, weekend Brazilian brunch, as well as an expanded focus on group dining, full-service catering, plus takeout and delivery. A smaller footprint version has been developed, 8,500-9,100 square feet, vs.10,600 previously, costing $3.5M vs $5.0M. The several smaller locations that have opened are doing volumes close to systemwide averages.

Fogo continues to generate cash on cash returns among the best within the full service dining industry. The Company states that, prior to the pandemic, traffic was up for six consecutive years. More recently:  Over the trailing twelve months, ending 10/3/21, US AUVs were $7.9M vs $7.7M in ’19. Store Labor Expense was the same at 25%. Food & Beverage Cost was 26% vs. 27%. Occupancy and Other Expenses were 19% vs 20%. US Restaurant EBITDA margin was 30% vs 28%. The Prospectus highlights a “40% plus ‘targeted’ cash on cash return, which has consistently been achieved in the past. A smaller footprint, 9100 square feet costing $3.5M (versus $5.0M for 10,600 square feet) has been developed, of which three are opened and doing volumes apparently close to systemwide averages.

Simply put, FOGO intends to build out its system at the rate of 15% annual unit growth in the US, augmented by international franchising. Considering the apparent success of the smaller footprint version, management sees the potential for 300 locations. Expanded focus on digital marketing and loyalty programs could further drive frequency and average ticket.

WHAT HAS CHANGED THIS TIME?

The following couple of paragraphs from the prospectus are instructive relative to future possibilities. The underlines are ours.

“ For example, our three new U.S. restaurants opened since 2019 (located in Bethesda, Long Island and Irvine) that were open during the entire 39 weeks ended October 3, 2021 had average weekly sales of $169,000 in that period, compared to average weekly sales of restaurants opened previously of $169,000, $85,000, and $148,000 generated in the 39 weeks ended October 3, 2021, Fiscal 2020 and Fiscal 2019. The $169,000 average weekly sales for the three new U.S. restaurants referenced above exceeds the average weekly sales implied by our target year 3 U.S. AUV of $6.6 million by 33%. Additionally, these three new restaurants are approximately 14% smaller on average (9,100 square feet on average as opposed to 10,600 square feet on average), hence demonstrating the potential that our smaller sized units can generate comparable sales levels. Furthermore, our three newer units opened during 2021 (White Plains, NY, Albuquerque, NM, and Burlington, MA) are performing above our expectations.

Since being public last time (1) unit growth will be faster, with 8-10 new restaurants in the US in ’22 plus 1-2 international franchises (2) There is a much larger buildout potential, which is a “multiple maker” in the stock market (3) store level economics could be even better than the already excellent 40% C/C “target” return. That target is based on a $3.5M cash investment and an AUV of $6.6M but the newest locations are doing substantially better than that. (3) The impact of Brazilian operations is negligible this time around (4) The Thomas Lee “overhang” is gone, replaced by Rhone. However, liquidity in the capital markets has never been higher. A couple of billion in today’s market place is a rounding error.

THERE ARE ALWAYS RISKS

To name a few: (1) Beef is a commodity, which goes up and down in price, and obviously would affect profit margins (2) An increased unit growth rate has its own set of management demands (3) The smaller size unit might not continue to perform as hoped (4) International franchising may not develop as expected (5) Store level margins are at historical highs. Though they have been consistently produced in the past, even a modest decline over a short period of time would concern investors.

In terms of evaluating these risks: (1) Commodities go up and down in price and menu prices can be raised if necessary. The profit margin consequence is short term in nature. (2) Managing the increased pace of unit growth should not be insurmountable, especially considering the progress of the last most difficult eighteen months, which included the opening of six locations in ‘21 and planning for 8-10 in ’22.(3) The smaller size unit might not be a home run everywhere, but results so far indicate modest success, at least, and this effort seems very unlikely to be a fundamental drag (4) International franchising might not help, but it is asset light so it won’t hurt.(5) As shown in the chart above, store level and corporate margins have been at this level, and been sustained, consistently in the past. The price/value equation presented to the customer, including the differentiated dining experience, should allow for pricing flexibility, which will protect margins.

We cannot know how enthusiastic we should be relative to FOGO stock because we don’t know what the IPO pricing will be or where it will begin to trade. In the real world, however, this well positioned and differentiated restaurant chain, with unit level economics leading to an impressive return on capital investment, should fundamentally perform “better than most”. The unique concept provides a great price/value to customers, and is complex and demanding enough to be defensible against potential competition. The unit level and corporate economics speak for themselves and management seems capable as stewards of the business and the capital. We look forward to the IPO offering and hope the stock doesn’t run up too far when it first starts trading.

There is lots more detail to follow in the next week or so, but it is safe to say that it is still tough out there in restaurant/retail land. Labor costs continue to be a huge issue, food delivery is a major subject and already in a shakeout phase, traffic is flat to down (mostly down) at almost all restaurant chains, especially “dine-in”. Since costs are rising and pricing power is limited, there is no margin relief to come at restaurant chains, unless they are recovering from depressed results, which is in fact the case in a few situations. We will be doing updates on many of the publicly held chains that will provide more details.

On the plus side, it is always interesting to hear from the chains that present on “privately held day”.  While many of the publicly held chains are “mature” and coping with the inevitable pressures of maintaining their original “cultures”, it is always exciting to hear about the success at younger companies, still run by their energetic founders. That’s not to say that all the public companies have lost that youthful enthusiasm, but the job has inevitably become more complex and multi-dimensional.

As far as our coverage is concerned:

Among publicly held companies, we expect to do NEW writeups on Noodles, One Hospitality, and Denny’s.

The section on our website devoted to “Up & Comers” is largely an outgrowth of exposure at ICR and those articles get more readership because we all hear from the public participants every ninety days.

Our previous writeups on &Pizza, Barcelona Wine Bar (which is part of Barteca, now owned by Del Frisco’s), Fitlife Foods, and Fogo de Chao (which was public a couple of years ago) can now be updated.

Posted two to three times per week, Roger comments on company reports, industry trends, and economic developments. Potential subscribers can peruse headlines for the most recent month, at no charge, on the first page of this website.