Ratings are maintained as:

Regarding companies that reported this week – ONLY CRACKER BARREL (CBRL)

THE WEEK AHEAD –  no earnings reports are scheduled

UPDATED CORPORATE DESCRIPTIONS: JACK IN THE BOX, ROCKY MOUNTAIN CHOCOLATE, FLANIGAN’S, CRACKER BARREL, DAVE & BUSTER’S – the average multiple of Enterprise Value is a SHOCKING  6.6X TTM  EBITDA – check out the numbers (and transcripts) of these, and every publicly held restaurant company as well as four non-restaurant franchisors – click through from  CORPORATE DESCRIPTIONS on our HOME PAGE

THE WEEK THAT WAS, ENDING JUNE 10th: RATINGS UPDATES ON (PLAY) AND (CBRL) after EPS REPORTS ( see transcripts), lots of maintenance on others 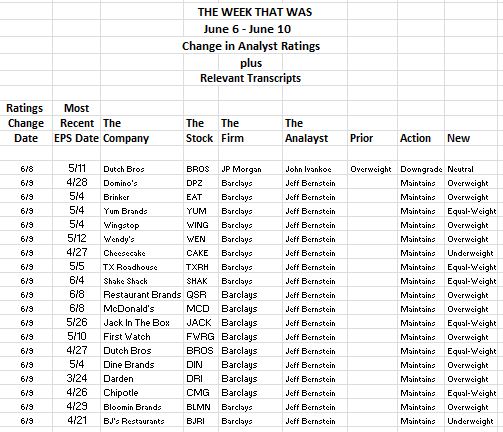 THE WEEK TO COME:

WHILE OUR STOCKS MIGHT BE GOING CRAZY, WITH THE MARKET, THERE ARE NO SCHEDULED QUARTERLY REPORTS THE REST OF JUNE. RATINGS WILL NO DOUBT BE ADJUSTED, HOWEVER.

THE WEEK THAT WAS – ANALYST RATINGS CHANGES, CONFERENCE CALL TRANSCRIPTS AFTER EPS REPORTS 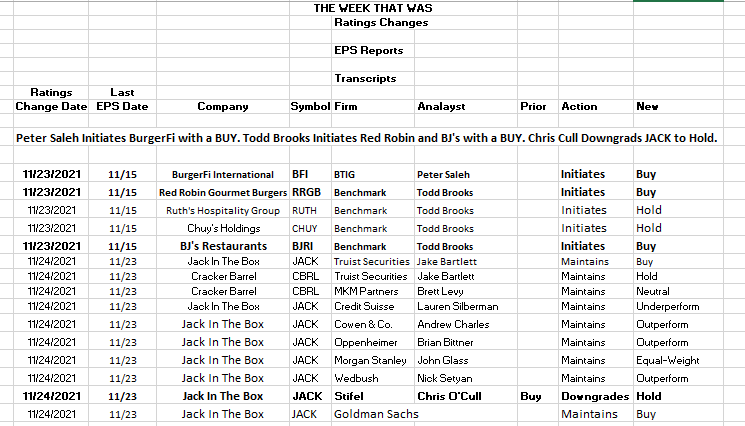 Jack In The Box

Cracker Barrel Old Country Store, Inc. (CBRL) reported their third quarter yesterday morning, with earnings beating estimates by $.02, announcing a $50M share repurchase, increasing the quarterly dividend from $1.25 to $1.30/share, and declaring a special dividend of $3.00 per share. Sounds great, and it’s not bad, but this well run company with a strong balance sheet, providing great value to their customer base, is fighting, like everyone else, the battle for market share. The following template shows some of the historical operating details, as well as analyst estimates going forward.

Here are some of the details you should know. While same restaurant sales were up 1.3%, traffic was down 1.8%, outperforming the casual dining industry, to be sure, with the average menu price up 3.1%. Comp retail sales were down 2.6%.

For the third quarter:  A reduction in the cost of goods offset other higher line items. Cost of goods was down 90bp, labor was up 50 bp, other store operating expenses was up 30 bp, store operating income was barely up, by 10bp. G&A offset that by 10bp, so operating income came in flat at 8.8% of revenues, up 2.8% for the year. Below the operating line, interest expense was 10 bp higher, income tax was 10bp lower, Net Income After Taxes was flat at 6.8%, generating $2.09 per share fully diluted, up from $2.03.

Company guidance for the full year is essentially unchanged. Comp store restaurant sales will be about 2%, retail comps will be flat to slightly negative, food commodity inflation will be about 2% for the year, operating income will be 9.0-9.3% of sales (so the fourth quarter will help), EPS expectations are unchanged at $8.95-9.10 (compared to $10.29 in ’18, which reflects an accounting adjustment and 52 weeks this fiscal year vs. 53 in ’18.

On the conference call:

National TV supported sales in the quarter, highlighting the food and value. The newest food platform revolves around Southern Fried Chicken (read our article from two days ago relative to healthier eating by way of meatless products). There was apparently quite a bit of training involved with this new platform, and the Company declined to break out how much of the labor increase was related to that but said that most of the labor increase was wage related. National TV and new creative on the billboard system will continue to be employed. Off premise sales increased 110 bp as a % of total sales, up over 15% YTY, but the total % was not mentioned.  Retail sales were disappointing but inventory optimization and control of shrink improved gross margin (CGS was 48.8% vs. 51.1% in ’18). Unfavorable weather cost them about 30bp. EBITDA for the quarter was up 6%.

Commodities, beyond ’19, are expected to be a bit more volatile and a bit of a headwind, pork (about 10% of the commodity mix), in particular. From a retail standpoint, an effort is predictably being made to diversify away from Chinese suppliers. New unit productivity upticked a bit, especially with higher menu prices on the West Coast. Wage inflation continues to be a challenge, but it is hoped that guests will benefit from higher disposable income. The use of tablets with the POS system is helping to control labor costs.  Menu price increases are targeted at about 2% per year. Delivery is being expanded, now in about 350 stores (out of 660), using Doordash. Other vendors may be used, chosen market by market. They believe this business is “highly” incremental.

We view CBRL as one of the most consistently managed and well positioned casual dining chains. It is safe to assume that less well situated chains are having even greater difficulty in their attempts to build market share and increase cash flow and earnings. We note that there are quite a few restaurant companies that can be considered strong cash flow generators, and some of that will be “returned to shareholders” through dividends and stock repurchases. These days, however, very few restaurant companies can be considered  attractive growth vehicles over the foreseeable future. Investors like to see a growth rate in earnings per share of at least 50% of the P/E multiple, which generally ranges in the high teens. Very few companies are predictably growing earnings per share close to 10% annually.