It’s becoming a common refrain: “don’t fight the Fed”, originally coined by the late and great market strategist, Martin Zweig, back in the 1980s.

Jerome Powell, Fed Chairman, has made it clear that he will do “whatever it takes” to get back to relatively full employment and balanced economic growth, “balanced” referring to a narrowing of the wealth gap. He has reiterated that he is “not even thinking about thinking about raising interest rates”, signaling that the Fed will continue to expand its balance sheet, keeping interest rates very low, bond markets and the stock markets still supported by the “Fed put”. The Fed’s largesse has no doubt been an important contributing cause of the weakness in the US Dollar, which supports exporting US industries.

Enter Powell’s predecessor, Janet Yellen, likely to be confirmed by the Senate as new Treasury Secretary. While the Fed and the administration’s Treasury Secretary are theoretically independent of one another, it has long been the case that the Fed is responsive to political concerns. Interest rates have firmed up a bit in the last two weeks, and the dollar has also bounced off its lows since early January.

Some headlines have said that “Yellen does not seek a weaker dollar for competitive purposes”, implying that she will favor a stronger dollar, likely accompanied by higher interest rates. Not exactly. She also said she is in a favor of a “market driven dollar”. She is therefore agnostic as to where the Dollar trades. We’ll see how she puts it in her testimony later today.

Now let’s see what is going on in the economy and how Fed/Treasury policy will play out.

THE ECONOMY IS WEAK

Retail Sales Are Weak – December sales came in weaker than expected, down 0.7% YTY and November was revised to down 1.4% vs. originally estimated negative 1.1%. Further breakdowns of the overall numbers look even worse. Restaurant sales were down 4.5%, electronics -4.9%, appliances and furniture -0.6%, online sales -5.8% after -1.7% in November.  In essence, aside from restaurant sales, “stuff” in demand due to the Covid seems to have run its course. While we don’t doubt that a certain amount of demand will be released when the Covid-related cabin fever breaks, a case can be made that a traumatized consumer, who have saved or paid down credit balances with stimulus checks may well spend less and save more than was the case before the pandemic. From March through November, 2020, American households saved $1.6 trillion more than a year earlier, while credit balances collapsed  at a record 14% annual rate.

Jobless claims in December were 965k, versus an estimate of $790k, in spite of Christmas retail hiring, much higher than November which was revised lower by 3k to $784k.

US real GDP is improving relative to the disastrous 2nd and 3rd quarters, but still down very sharply from a year ago. While it is well accepted that 2020 will be a lost year, economists and commentators are quoting “growth of something like 6% in 2021. Goldman Sachs just raised their forecast from 6.4% to 6.6%, fueled by $1.9 trillion (or something close) stimulus’ affect on disposable incomes and government spending. The reality is, however, that the US economy has been growing at a tepid low to mid 2%+ range for twelve years now. It grew at an average of about 2.3% for eight years under President Obama. In the four years of the Trump administration, with the tailwind of lower taxes, major government deficit spending, less governmental regulation, a trillion dollars of repatriated overseas capital and interest rates very close to zero, GDP grew at an average of about 2.5%. This can fairly be called “the law of diminishing returns”, a lower “marginal return on invested capital” or, less charitably a “misallocation of capital”.

At the same time that economic signals are weakening, inflationary signals are more apparent.

THE DEBT AND DEFICITS CONTINUE – INFLATIONARY IN THE LONG RUN 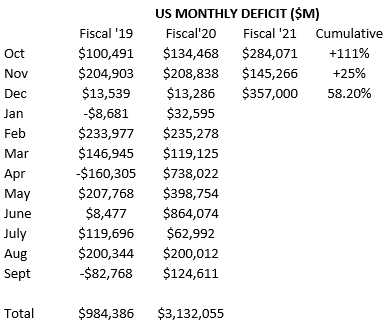 The deficit so far this fiscal year, the three months through December, show a deficit 58% higher than a year ago. Unfortunately the new fiscal stimulus package, proposed at $1.9 trillion, will inflate the government spending again this year. Though the amount is negotiable, President Biden has stated that it is only a “downpayment” on future plans. It seems reasonable to expect this fiscal year’s deficit to at least approach the $3.1 trillion of last year, perhaps even exceed it.

We point out again that the debt increases almost every year at much more than the annual deficit would suggest. This is due to “off budget” spending, and those dollars are in large part borrowed from the social security fund.  The deficit shown above in ’19 was $984 billion but the debt went up by $219 billion more, $1.2  trillion higher in total. The deficit in the Y/E 9/30/20 was $3.1 trillion but the increase in debt was $4.2 trillion. People….these are not  trivial differences, and this huge accelerating debt load will further drag on our economy.

First, the parabolic increase in the M2 money supply has to be some cause for concern. 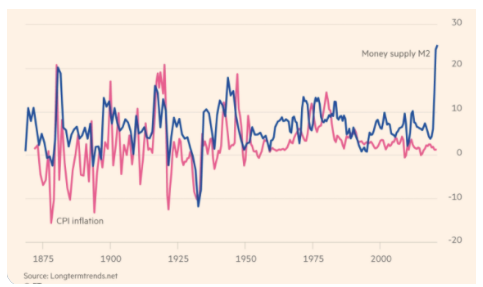 Secondly, reported import and export prices for December are cause for inflationary concern, and this could be one contributing factor to the rise in interest rates and the US Dollar. December import prices were up 0.9% instead of the expected 0.6%. November was revised slightly upward, from 0.1% to 0.2%. Export prices were also up much more than the expected 0.6% in December to 0.9%. November was also revised upward by 0.1% to 0.2%.

Third, the charts just below, showing the trend in commodity prices, could be indicative.

Lastly, the seemingly inevitable move to a nationwide $15 minimum wage could also contribute. While it is true that perhaps only 3 or 4 percent of the workforce earn the $7.25 minimum wage, with the lowest paid sector (leisure/hospitality) earning $17/hr, a higher minimum could well provide upward pressure. That $17/hr worker might not be happy earning just over the acknowledged subsistence level, and expect a bit more.  Its also true that employers will attempt to hold the pricing line by absorbing labor increases by way curbing expenses elsewhere, but a great deal of that may already be in place. In any event, we haven’t seen any arguments that a higher national minimum wage will be deflationary.

In spite of the factors provided above, the month to month CPI report doesn’t show much yet, up 0.4% in December but up just 1.4% for the twelve months ending December. The all items CPI, less food and energy, was up just 0.1% in December, up 1.6% for twelve months. The Fed, of course, has clearly stated a policy to allow inflation to run  higher than 2% annually for a while because it has been under 2% for so long. Keep in mind that, while prices of goods and services (except for major expenses like education and health care) have been stable, asset price inflation has been huge. There is a reason why very rich people are paying over $100M for a residence or a rare painting, anything but cash which they know will be worth a lot less in the future. As always, inflation is the cruelest tax, affecting the rich the least. They have their land, homes, art, stock and stock options, gold, etc. It’s the lower and middle class that gets hurt, left to wonder why they are making more in nominal terms but have to work harder to make ends meet.

The Federal Reserve and the supposedly independent US Treasury, as a result of at least forty years of fiscal/monetary promiscuity have incompatible masters to serve.

On one hand they are supposed to keep inflation at a tolerable level, these days no higher than a “symmetrical” 2%, At some point that will call for higher interest rates, and normalization to 150-200 bp above the rate of inflation, a range of 3.5-4.0%, providing a “real” return to savers. Unfortunately that would add an unacceptable $800-900 billion of annual interest to government expenses, blowing the deficit even higher, exacerbated further yet because tax receipts would contract as businesses cope with higher interest rates. So….interest rates might edge up, but not by much.

On the other hand the Fed’s second mandate is to foster full employment. This requires relatively low interest rates and continued government fiscal stimulus, which along with a weaker dollar will support US business activities. These policies problematically fosters the inflation that they don’t want to get out of control.

The objectives are inconsistent.

When in doubt, the policymakers will choose the inflation every time. The public, especially the lower and middle class, doesn’t quite understand why they have to work harder and longer to make ends meet.  It is very apparent, on the other hand, when interest rates and/or taxes are going up and unemployment is rising. Far better for the incumbent politicians to stimulate the economy by way of government spending, low interest rates, and a lower dollar. Somebody else can deal with the inflation later. Paul Volker came along in 1979 and Ronald Reagan stuck with him, enduring the higher interest rates of the early 1980s to squeeze out inflation, but there is no Paul Volker or Ronald Reagan these days and the problems (the deficits, the debt, the tepid economy, the already very low interest rates) are an order of magnitude larger.