We have written quite a bit about PLAY over the last several years and we encourage interested readers to use the SEARCH function on our Home Page. For the record, we are neither long nor short PLAY stock.

Dave & Buster’s is familiar to most of our readers. In summary, the Company was founded in 1982 in Dallas, TX. There are now 139 locations in 40 states. As of the end of calendar 2020, the average size was 41,000 sq.ft., smaller than in years past because some smaller sized (20k-30k sq.ft.) locations have been opened. The average sales volume in the FY ending 1/31/20 was $10.5M, with 58% of revenues coming from Amusements and 42% from Food & Beverage. The store level EBITDA margin was an impressive 27.2% and the corporate EBITDA margin was also admirable at 20.7%. These above average EBITDA results are a result of the fact that the Amusement component is so high, having grown from 44% to 58% between 2006 and 2019. It is fair to say, therefore, that the Dave & Buster’s facility is more of an indoor kids’ amusement park than a restaurant. A big operating advantage is that the Cost of Goods is only 18%, rather than the more typical 30% (give or take) for most restaurant chains.

The company emphasizes in their presentations the high ROI and “free” cash flow, especially for new units, but it also a fact that initial volumes are not sustained. It is worth noting that depreciation (of games, in particular) is a lot higher for PLAY at over 9% of sales than for restaurant chains that typically run 4-5%, and the Amusement facilities at PLAY are guaranteed to need that depreciation re-invested in the near term. Most restaurants, on the other hand can often defer that process in the short term and “classic” décor and good original kitchen equipment may not have to be replaced, even longer term, to the extent that the depreciation expense implies. The result is that EBITDA for PLAY is not nearly as indicative of free cash flow generation as it might be for restaurant chains.

Dave & Buster’s came public for a second time, in 2014, after spending several hundred million dollars to refresh, perhaps even “reinvent” the system, and produced impressive same store sales, profits and cash flow for a number of years. By 2018, however, for a combination of reasons, the same store sales after stagnating, turned down. Operating income flattened from calendar 2016 through 2019 though the system grew by over 50%, from 81 locations at 1/31/16 to 139 units at 1/31/20. In addition to opening 58 stores, at a cost approximately almost $300M, hundreds of millions of dollars were borrowed to buy back stock. With the shrunken share base EPS did better than operating income, but flattened and finally turned down slightly in the year ending 1/31/20.

We have discussed at length in the past the question as to whether the depreciation charge at over 9% is adequate to refresh the 58% of revenues that is generated from Amusements. It seems at least possible that this issue has been an important factor within the demonstrated performance cycle over the years. The Company originally came public in 1995, went private after “stagnation” in 2005, then spent ten years in private equity hands during which hundreds of millions were spent on capital improvements. PLAY came public again in 2014, performed well for several years and the question today is to what extent the operating history from 2016 through 2019 is a prelude to greater problems. The activists that have recently taken positions are doing their best, we are sure, to address this issue.

Dave & Buster’s management gave a one hour video presentation, accessible on their website. There was little new incremental information and a lot of discussion about the economics of their stores and the changes that the company made to operations and food and beverage offerings as a result of Covid 19.  The presentation does a good job of explaining the bull case on the company. The two most important takeaways from the presentation can be seen in the following two tables. The main points are as follows: 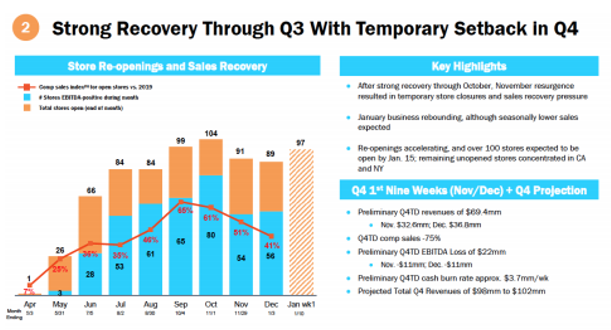 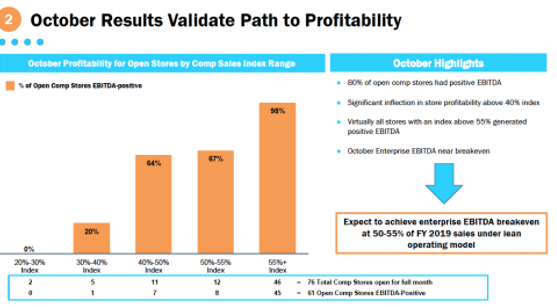 Liquidity is adequate, but at a substantial cost and the cash burn continues. The number of stores that are open continues to fluctuate. In October, PLAY had 104 out of 139 stores open, but that dropped to 89 stores in December. The number of stores that are open now is around 100. With 27 high volume stores currently closed located in CA and NY, we do not expect the total number of store openings to improve for another month or two. Getting the stores in CA and NY open would help the company’s liquidity situation. Since Q1’21 (April ’20), Cash from Operations has declined from a positive $17M to a negative $32M at the end of Q3 (Oct.’20). This compares to a positive $217M through Q3 last year. The company has a $44M income tax receivable and should get $11M of that over the next few quarters. Due to store closures since the end of Q3, the cash burn rate has increased from $2.4M/wk to $3.4M, or $13M per month. While this is a considerable improvement from the initial $6.4M/wk PLAY was burning at the start of the pandemic, the company is still far from cash flow breakeven.

The company has been able to maintain liquidity, but at a very high cost to shareholders. There is currently $12M in cash on the balance sheet. This compares to Q1 cash of $156M, Q2 cash of $224M and Q3 cash of $8M. There is $277M available on the revolver vs. $314M end of Q3. PLAY therefore has almost two years worth of liquidity. However, the cost of that liquidity to shareholders has been substantial. In addition to the 17M shares the company issued earlier this year at around $10.70 per share, in October the company issued $550M worth of five year senior secured bonds with a coupon of 7.625%, upsized from $500M . The annual interest cost of $41M effectively doubles the $20M in interest expense the company incurred in 2019. While the company emphasizes the two year extension and modified debt covenants through 2022 on the maturity of its credit facility, the interest rate doubled from 2% to 4%. The company also has $17M in deferred vendor payments and $48M in deferred rent it will eventually have to pay.

In past reports we have discussed the relatively poor capital allocation of over $1B in capital expenditures since 2015. The timing of the company’s share repurchases have also turned out poorly. Prior to 2020, PLAY purchased approximately 13M shares for $598M or an average cost of around $46-$47 per share. Earlier this year the company was forced to issue 17M shares for $182M or an average of around $10.70 per share. The share buyback program has therefore destroyed over $400M of value for shareholders.

Putting it another way: There are 56% more shares outstanding due to the two secondary offerings. Compared to a year ago, the stock price is 25% lower ($33 vs. $44)  but the Enterprise Value ($3.5B vs. 3.2B, with the extra shares and debt) is 10% higher. The real world value of this company with 56% more shares outstanding and more debt is obviously not worth 10% more today than it was a year ago. With activists involved, as discussed below, and the stock seemingly fully priced at $33, it will take a very substantial “reach” to get shareholder back to the $44  of a year ago.

We can’t help but reflect upon the $70/share  high in 2017 before those hundreds of millions of dollars, largely financed with debt, were spent to buy back stock. It turns out that “returning cash to shareholders”, as most companies  like to describe it, by way of stock buybacks is not necessarily so well stated.

The current valuation is about twice the historical range, relative to earnings and cash flow and we have to believe that this is due to the presence of several well-known activists. When there are hundreds of billions, at least, that are searching for a yield, there are bound to be a couple of buyers that will bet on quick normalization of consumer activities after the pandemic. Over 35% of the shares outstanding are held by just four investment firms, two of them noteworthy activists. Since PLAY was taken private once before and the company might be able to generate cash flow of over $150M if same store sales can recover, the marketplace is apparently hoping for a transaction sometime soon. Perhaps the activists will be able to persuade management to slow growth until the base business improves, utilize the free cash flow to reduce the high coupon debt the company recently issued, at some point refinancing the debt at a lower rate.

Activist investors have bought over 5.4M shares in the last few months, in some cases lowering their $40+ per share initial cost basis with large purchases in the $16-18 per share range. KKR just reported that it has increased ownership to 10.7%, up from only 2.65% early in September. KKR had a member of their firm added to the Board of Directors last year and just recently, a representative of Hill Path (with 9.3%) joined the Board.  Both firms have described their intentions as “cooperative agreements”.

Management has done what was necessary to maintain liquidity, but the cost has been very dilutive to shareholders. As we pointed out earlier, comps had been negative for three years before Covid. In our view, the two new Board members representing KKR and Hill Path is a positive, but they are not magicians. It is possible that the post pandemic operating results, namely the AUVs, the store level and corporate operating margins will fall short of investor expectations. The pre-Covid issues of competitive intrusion and the need for Amusement as well as F&B innovation continue to be in place. The possibility exists, that both Amusements and F&B need to be, in essence, re-invented. In addition customers that have increased their at home gaming activity may not feel the need to visit D&B as often. Higher capex spending by PLAY on video game equipment is already a factor (up 17% YTD) and there could be a slow recovery in corporate events that have generated about 10% of revenues. While 27 high volume locations in CA and NY are still closed, the opening schedule and ongoing restrictions are still an uncertainty.  Lastly, while full service restaurant chains SSS weakened by 5-10 points in Q4 (QSR hardly at all) as in store dining was shuttered again around the country, PLAY’s “temporary” Q4 setback saw SSS in the open units fall twenty five points, from -34% to -59% from September to December. The PLAY system is therefore extremely sensitive to Covid related concerns so the timing and extent of a recovery becomes that much more questionable.

Overall, there seem to be many more questions than answers. In spite of the above described uncertainty, the stock marketplace, with PLAY acting well, is likely assuming a transaction at a premium to the current price. Almost anything is possible in this low interest rate environment and there is a fortune of capital looking for a home but, with the valuation band more than adequately stretched, we wouldn’t count on much of a premium. Private equity investors have a great deal more patience than public shareholders, and, if they take on this situation, we suggest they will need it.