SEMI-MONTHLY FISCAL/MONETARY REPORT – THE STIMULUS IS MIND BOGGLING – GOLD AND THE GOLD MINERS HAVE JUST BEGUN THEIR MOVE !

The Coronavirus will pass, but the economic ramifications will be far longer lasting.  You don’t get out of a fiscal/monetary hole by continuing to dig. The current health crisis has brought forward, accelerated, and magnified the economic trends that were already in place. The monstrous buildup in debt is important because economic history has clearly shown that the higher the debt burden the bigger the drag on productive growth. This is why “the longest (and falsely promoted as “the strongest”) economic expansion in US history only provided 2.3-2.4% annual real GDP growth from ’10 through ’19. You heard it here first: there is no chance in hell that future growth (after the “dead cat bounce” from current levels) will be higher than 2% or so, likely to be materially  lower, with the new debt burden that the world will be carrying.

We all know that the Fed balance sheet is exploding, as it finances the monstrous government spending. It is instructive to look at the pattern of growth over the last dozen years, as the supposedly apolitical Fed ignores the conservative side of the Keynes economic equation. John Maynard Keynes suggested, the in the late 1920s and early 1930s that the Fed should provide stimulus in hard times and pull it back in better times, presumably muting potential booms and busts. Unfortunately, economic conditions never seem to get good enough to remove the previous accommodation. Recapping the last dozen years: The Fed Balance sheet was under $1T in early ’08. It grew to about $2.2T by late’08, stayed around that level until mid ’09 when it started moving to about $3T by late ’11. From late ’12 to late ’14 it moved to $4.5T where it stayed until early ’18. The economy apparently never got quite good enough to pull back between ’10 and late ’17. In early ’18 the Fed announced a program of “automatic” reduction, with the implied objective to get back to perhaps $2.5-3.0T. It got back (only) to $3.7T by the end of ’19, but with the economy softening and distortions in the short term “repo” bond market, the Fed backed off and built its asset base to $4.2T, clearly on the way to a new high by mid’20. Which brings us to the current “new world”. Since March 4, 2020, the Fed has taken its balance sheet from $4.2T to $7.0T, and Chairman, Jay Powell, has indicated that he will do “whatever it takes”. We expect it to be $10T or more in a matter of months. People, this does not provide organic, productive, sustainable economic growth. This only provides an addictive high (not so high, in this case), supportive by always increasing doses of fiscal/monetary drugs.

The debt and deficits that require the Fed’s intervention are likewise exploding. The US debt, excluding unfunded entitlements like Social Security, is now over $25T, up from $22.7 at 9/30/19. The operating deficit which was supposed to be about $1.2T for the full year ending 9/30/20 is now expected to be at least $4.0T. The deficit in April alone was $738B. At this junction, after trillions of dollars have already been provided, it is clear that there is much more fiscal/monetary stimulus to come and nobody knows the ultimate magnitude or duration. Most importantly: virtually everyone, fiscal hawks and doves alike, bipartisan in nature, agree that the support must be provided, and we can all worry about the ramifications later.

THE PRICE OBJECTIVE FOR GOLD BULLION

The price of gold has shown a strong long term correlation with the federal US debt. The buildup of the Federal Reserve balance sheet over the last fifteen years has also strongly correlated with the gold price. The above discussion therefore supports a materially  higher price of gold related securities.

We believe that gold has proven itself for thousands of years as a store of value and the ultimate currency. It competes with paper currencies as the supply and demand of one currency (gold) must relate to the supply and demand of (these days) unbacked colored paper. The following chart shows the value of the gold held by the United States, since 1918 (shortly after the Fed was established in 1913), relative to the adjusted monetary base. A chart looks similar on a worldwide basis. You can see that from 1913 until just before the end of WWII, the value of the gold was about 35% of the monetary base. After the Bretton Woods agreement in 1944 whereby the US Dollar was established as the reserve currency, the percentage drifted down. The monetary base was growing steadily, and the US gold backing was declining, but the world was relatively unconcerned during a postwar recovery period. In the late 1960s, however, as US spending for the Vietnam War and President Lyndon Johnson’s Great Society accelerated, US trade and operating deficits became widely anticipated. Over 50% of the US gold was exchanged for dollars within eighteen months prior to August, 1971, when Richard Nixon “closed the gold window”. At that point, our gold amounted to only 6-7 % of the US monetary base. This level is important because we are back to that same level today.

We are not suggesting that the US, or anyone else, will make their paper currency convertible into gold any time soon. It wouldn’t work for long, in any event, because deficits in all major trading countries are larger than ever, and paper currencies would once again be tendered for gold. No country could back their currency with gold, unless they were “balancing their books” or, at the least, that prospect was in sight. We do, however, feel that the value of the gold “in circulation” should have a relationship to the value of alternative currencies. You might be surprised to learn that the country most able to make their currency convertible into gold would be Russia, perhaps our most prominent political adversary and a consistently large buyer of gold.

he chart above indicates that 7% could be 35%, or five times the current price. This  ballpark calculations indicate what we consider to be a rational value of 5-6x the current $1740/oz, or $8700 to $10,440/oz. This ballpark price range objective is at the current time. The monetary base is now rising at about 20% per year with all the money printing to support the economy in the current crisis. Though gold is now moving steadily higher, the monetary base is also rising so the price objective within just the next few years could be well over $10,000/oz.

THE TIMING – FOR GOLD BULLION PRICES

The following two charts provide insight into the possibility of an imminent major upward move. The first chart shows the high correlation of the gold price to the amount of worldwide sovereign negative yielding debt, which peaked at $16-17T in mid ’19 and is now in the low teens. Even in Germany, the strongest European country, the entire yield curve has been negative or close to it. We believe that the amount of negative yielding debt will continue its upward march and could even include some of the US debt, especially based on President Trumps implied blessing just in the last couple of days. The continued upward trend of this indicator could be influential in breaking the gold price out above the previous all-time high of $1911. That, in turn, could ignite the price toward the price objectives noted above.

The second chart shows a nineteen-year price chart of gold. It shows the end of an 11-12-year bull market, ending in 2012, then a 6-7 year “consolidation”. The price has now clearly broken above $1400, the previous high. Chart technicians would say that the longer the base, the bigger the move. It is conceivable that a new bull market has begun that could last for quite a few years. This would tie in to our logic that the price of gold could be 5-6 times higher over a number of years.

There are other charts we could provide that show a long term correlation of the price of gold to the level of US debt. Over the last fifteen years the same sort of correlation has taken place between gold and the buildup of the Federal Reserve balance sheet.

The chart just below shows the gold mining index, XAU, relative to the price of gold bullion. Since 2008, the relative valuation of gold equities to gold bullion has fallen 75% from the prior 25-year average. The ratio of the XAU Index to spot gold averaged 0.25x for a quarter century through 2008. As of 3/31/2020, the ratio was 0.05x. 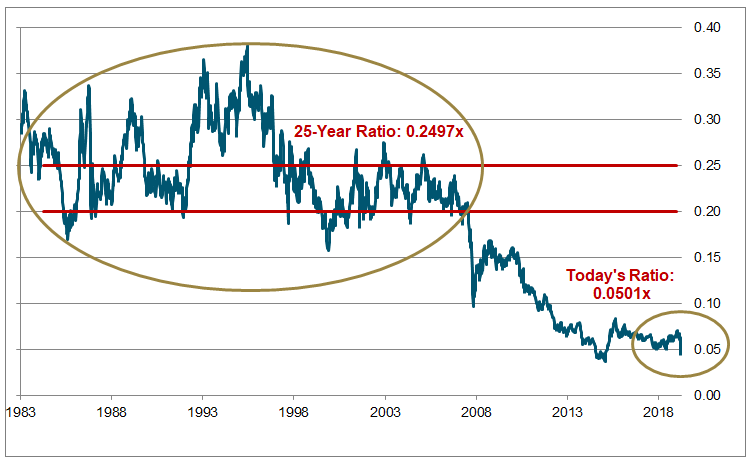 We believe that the substantial divergence in performance is due to mostly outdated opinions, the justification for which have been corrected over the last 10-12 years. Managements have been improved, balance sheets have been strengthened, operations have been streamlined. Additionally, energy costs, which are 15% or more of mine operating expenses are 60-70% lower today than they were a decade ago. Combined with sharply higher gold prices, results from established miners have been impressive recently and should become even more so.

The healthcare crisis has accelerated, magnified, and brought forward in time many of the long term fiscal/monetary trends, as well as fundamental developments in our society. We believe that the worldwide economy will stagnate, at best, after the short term sequential bounce from the current situation. Some companies will survive and prosper, many will not. All will change to varying degrees. Profit margins will change, mostly for the worse. From an investment standpoint, we continue to feel that gold mining companies are the single best asset class in terms of reward versus risk. We’ve been joined lately in our conviction relative to gold by legendary investors and portfolio strategists such as David Rosenberg, Jeff Gundlach, Ray Dalio, Jim Roberts, Stanley Drukenmiller, David Einhorn, Stephanie Pomboy, Luke Gromen and others. Long term proponents of gold and gold miners such as John Hathaway Fred Hickey, Bill Fleckenstein and Peter Schiff are more convinced than ever. Though it’s nice to have some “smart money” in our camp, the investment world in general is just beginning to take small positions in this sector. Gold bullion is up about 15% this year at this moment (a safe haven, after all). The miners, which were down for the year a month ago, are now in positive territory and catching up with bullion. In the last six weeks, gold mining stocks have moved about 4x the price change of bullion.  We believe we are still in the first inning of the resumption of the long term bull market for gold related securities.