DINING ROOMS ARE OPENING – WHAT CAN WE LEARN ? + OPERATING COST TRENDS

Darden Restaurants provided an update this morning on sales trends. Darden is a premier operator in the full service casual dining sector so their sales report provides us with an early look into sales  and profitability trends. Below is a table showing sales trends, in total and indicating the To-Go portion of Revenues. 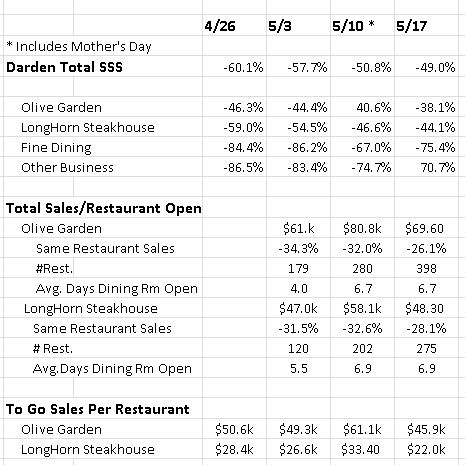 We’ve spoken before about the unknown equation, once dining rooms are opened, between how much of the off premise sales are retained as the dining room revenues build. The positive possibility is that a good portion of the off premise increase can be retained  even after the dining room revenues have returned close to pre-pandemic levels. We won’t know the answer to this question for a while however, probably not until after a vaccine has allowed dining rooms to operate close to full capacity. In the meantime, we are all interested in cues as to what to expect. It is a given that full service restaurants cannot be cash flow positive with restaurants operating at even 50% of capacity. At 75%, perhaps, if the off-premise portion can be largely retained, but even that is questionable, considering higher labor (and other ) costs.

You can see from the table above that dining rooms contributed about $23.7k of average weekly sales at Olive Garden in the week ending 5/17 out of the $69.6k total (for the 398 or 47% of the system with dining rooms opened).  That was accompanied by a decline (from 4/26 to 5/17) in average weekly To-Go sales of $4.7K on the total system. Since only about half the system had opened dining rooms, it is implied that about about 9.4k of To-Go sales per store in the total system was cannibalized, or 40% of the total gain. At LongHorn, it is implied that the 275 units (52% of the system) added about 26k the week ending 5/17 but To-Go sales declined 6.4k in those stores with open dining rooms from 4/26 to 5/17,  which amounts to about $13k/store for the entire system, 50% of the overall gain. For our purposes, we figure 50% is an adequate approximation.

We can’t know whether this pattern will prevail, but let’s look at the following simplistic theoretical model. The pre-pandemic model is $5.0M of sales, consisting of $4.5M dine-in and $500k To-Go. The pandemic hits and Dine-In goes away but To-Go  becomes an impressive 40% of previous levels or $2M annualized. The pandemic ends. Total Sales go from $2M to $3M,  up by $1M, but $500k  of To-Go slips away so total sales are $3M-500k or $2.5M (still down 50% YTY). Sales go up another $1M to $4M but we lose another $500k of To-GO (to $1.0M), now doing $3.5M overall (still down 30% YTY). Sales go back to $5M, same as Pre-Pandemic, we lose another $500k of To-GO (to $0.5M) and we’re back where we started. Problem is: in today’s environment costs will be higher so our cash flow and profit margins will be lower. The hope therefore, based on this simplistic model, is that something less than 50% of the overall gain in sales will come from a reduction in To-Go sales, and also that costs won’t escalate.

MARGINS TO BE EXPECTED

It is relevant to the discussion above, as we try to anticipate what the sales recovery (which will happen ) will look like is that costs are inevitably going to be higher. We’ve written before that unintended consequences of the government stimuli will emerge over time. We’ve suggested that supply chain inefficiencies could cause commodity prices to move higher and it was  in the news today that egg prices are currently up 38% YTY, ground chuck is up 11% and pork is up 10%. Cheese is much lower, so pizza purveyors can further celebrate.

Labor continues to emerge as the biggest single harmful variable.  Crew members that have stayed on the job are receiving hazardous duty pay. Laid off employees are making more staying home than they were at the job so must be lured back with some sort of signing bonus.  This trend will not change. If somebody knows where the efficiencies will come from, other than possibly leveraging higher sales someday, we would like to hear about it.

Darden pointed out today that their current overall corporate cash burn is $10M per week, so that’s a rate of something over $500M per year at the current rate of sales. Darden is a company that has “normalized” revenues of about $8 billion per year, so cash flow is negative by about 6% of the previous level but 12% of the current $4 billion run rate. If we figure that 40% of incremental revenues flows through to cash flow (100%-28% food cost – 16% variable (half the 32% total) labor – 16% variable operating expenses such as marketing, utilities, waste removal, etc.etc.), that would require $1.25B of higher sales from current levels to get to cash breakeven, up 31% from here.  GAAP breakeven, covering $336M of last year’s D&A to would require another $840M of annualized sales or 21% on the current sales base, so Darden needs something like a 52% gain in sales from here to achieve break even on a GAAP basis.  That assumes that costs haven’t changed. This calculation is not supposed to be precise, but we believe the order of magnitude is instructive. We’re happy to entertain a discussion from the Company, analysts and/or investors, and adjust our analysis if justified.

The above discussion is not intended to single out Darden as a poor investment. We are neither long nor short DRI, and this Company is actually the best managed diversified full service  publicly held casual dining  operator in the world, as far as we are concerned. It is only because they are so well managed and so consistently candid in their disclosures that we focus on their results. DRI has a lot of wood to chop to get back to where they want to be, and their competitors undoubtedly have at least as much ground to travel.