FISCAL/MONETARY UPDATE – A WILD PARTY IS INEVITABLY FOLLOWED BY A MASSIVE HANGOVER, BUT THERE IS A SAFE HAVEN

THE MONTH THAT WAS – IN THE WORLD OF MONEY…..in particular ..GOLD AND THE GOLD MINERS

You don’t need us to tell you that the stock market over the last six months has been the worst in the last fifty years and the bond market worse than any in over one hundred years. It could have something to do with the fact that the US Federal Reserve, joined by other central banks have presided over the largest experiment in financial history.  We’ve discussed this many times before, and symptoms such as companies selling at 50-75  times sales, “shiny objects” in the form of trillions of dollars of cryptocurrencies, hundreds of billions of dollars in the form of SPACs that could purchase a trillion dollars of companies “to be determined” are just a few chapters in The Financial Follies of the Early Twenty First Century.

After a modest rally at the end of last month, the stock and bond markets weakened again in June, especially the last few days of the month. Gold mining stocks acted more like “stocks” than gold bullion, which actually held up fairly well. While gold bullion was down only about 1.6% in June, mining stocks were down in the mid teens. However, as we discuss below, the gold mining stocks represent truly extreme value at this price, should be trading two to three times higher relative to the current price of gold bullion and a great deal higher than that once gold bullion does what it will ultimately  do.

THE FED (THE PRESUMED GUARDIAN OF THE MONEY)

As we discussed last month, the Federal Reserve is kidding themselves (and lots of investors), as they project the possibility of a “soft landing” for an economy that is already in “stagflation” and about to get worse under the increasing burden of higher interest rates. There is no possible way that interest rates could be raised high enough to stifle the current inflationary trends. That would require short term rates above the rate of inflation, encouraging savings rather than spending, which translates to a level of 8-9% even if inflation comes down to five or six percent from the current rate above 8%. We predict that, within just a couple of months, the Fed will find an excuse to back off from forcing rates higher, even though inflation is far from tamed. That inflation related reality should encourage ownership of (purchasing power protecting) gold related assets.

Aside from higher interest rates, the Fed has promised to reduce their balance sheet that now includes about $9 trillion of fixed income securities, in particular US Treasuries and Mortgage Backed Securities. The printing of fresh capital to finance the federal operating deficit has been an important feature of the Fed’s activity, as shown in the chart below. You can see how the Fed’s balance sheet popped from close to one trillion dollars in the heat of the ’08-’09 financial crisis, continued upward to over four trillion dollars during the great recession. It plateaued for several years, and the Fed’s plan in late 2018 to reduce its size was aborted in early ’19 after the stock market went down by 20%. It is worth noting that the quadrupling of the Fed balance sheet (by printing money out of thin air to buy US Treasuries and Mortgage Backed Securities, keeping interest rates abnormally low in the process) was followed by only about a ten percent reduction before political pressures prevailed and they backed off. 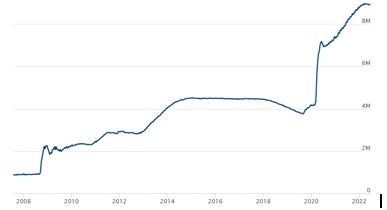 With that history, let’s go to the second chart, which shows what has happened since the Fed announced the current plan to normalize their balance sheet. In early May the Fed announced their plan to start reducing the balance sheet, $47.5B during June, increasing to $95B/month by the fall, a rate of reduction that would then prevail for an unspecified time. More specifically: beginning June 1, it will no longer reinvest proceeds of up to $30 billion in maturing Treasury securities and up to $17.5 billion in maturing agency mortgage-backed securities per month. Beginning September 1, those caps will rise to $60 billion and $35 billion, respectively, for a maximum potential monthly balance sheet roll-off of $95 billion.

The chart just below shows what has actually happened. 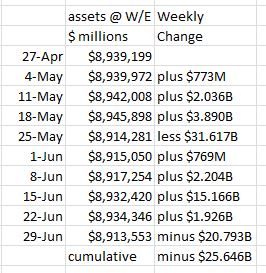 You can see that, no matter how you look at it, the Fed’s action has substantially lagged the announced “plan”. If they cannot, for one reason or another, reduce Assets by $47.5B monthly at the beginning of the program, there cannot logically be much confidence in the longer term. Also, if interest rates have been so firm, and the economy  has been so soft, when there has been minimal implementation, we can only imagine what the capital markets would do if $95B per month of tightening were imposed.

Gold bullion has in fact provided a relatively safe haven this year, down only a few percent in US Dollars and up materially in almost all other currencies. Gold mining stocks, as we said above, have acted more like “stocks” than bullion itself, which central banks worldwide  (even as they debase paper currencies) continue to accumulate in record quantities.

Our conviction regarding the underlying value of gold mining stocks is higher than ever, considering the recent lackluster performance relative to gold bullion itself. The chart just below shows how the gold mining stock index compares to the price of bullion and you can see that the gold miners should be  trading two to three times higher, considering an “average” relationship. 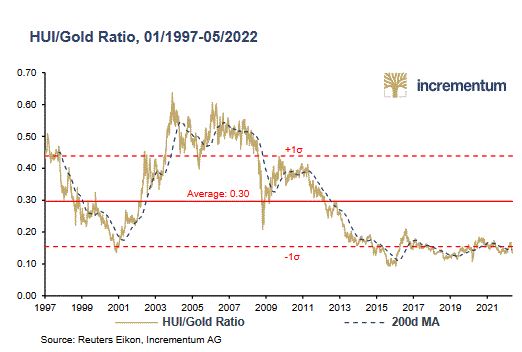 Beyond this, precious metal producers are generating the highest profit margins within the commodities sector. Even more impressive: Comparing the GDM gold mining index to the S&P 500: GDM has a P/E 25% lower, a Price/Cash Flow almost 50% lower, a Price/Book Value less than half, an Enterprise Value/EBITDA of about half, a dividend yield almost double with debt/Enterprise Value of only half. In summary: the gold mining stocks provide extreme value in accordance with  the legendary 1934 Graham & Dodd tutorial, Security Analysis, that has helped to enrich Warren Buffet and so many other long term value driven investors.

John Maynard Keynes had some good ideas back in the 1920s: the Federal Reserve Bank had been formed in 1913, and would manage the economy, control inflation, reduce the frequency and severity of booms and busts, stimulate the economy in hard times, and pull back the accommodation in good times.

Keynes articulated this very well, in 1923: “Markets cannot work properly if the money, which they assume as a stable measuring-rod, is undependable. Unemployment, the precarious life of the worker, the disappointment of expectations, the sudden loss of savings, the excessive windfalls to individuals, the speculator, the profiteer–all proceed in large measure, from the instability of the standard of value”.

Harry Browne, the brilliant economist, and writer, who wrote “You Can Profit from the Coming Devaluation” in 1970 (which I republished in 2012), anticipating the devaluation of the US Dollar when Nixon closed in the gold window in 1971, put it another way. He said that “you can’t have a sound economy without a sound currency”.

Starting with the longer term view, under the management of our Federal Reserve, the 1913 Dollar (when the Fed was formed) has become worth about $.03. (In contrast, an ounce of gold still has roughly the same purchasing power.) More recently, over the last ten years, our Fed (with imitation by the ECB, Japan, and China) has given us several “QE’s”, during which short term interest rates have gone to zero, there is still something like TEN TRILLION of sovereign debt with rates at ZERO or less, and the Fed balance sheet went from $900B to $4.5 TRILLION .

After several Quantitative Easings over the last ten years, a little over eighteen months ago the Fed announced that they would raise interest rates to “normalized” levels (presumably upwards of 3% for short rates and above 4% for  thirty year paper) and, on an automatic programmed basis, reduce the balance sheet to a more tolerable $2.5 trillion (still almost a triple from where it started in 2008). We predicted that this program wouldn’t go far, because the economy couldn’t tolerate it, and interest rates on (now) $22 Trillion of debt would wreck the US budget. Sure enough: it is now clear that the interest rates will not rise further, and the Fed balance sheet will only shrink perhaps another $200B this year, down to about $3.7 trillion. This latest objective apparently provides comfort that the economy will not be choked off from the “steady” growth: one year, in 2018, at 3.0% (with lower tax rates, repatriation of $800B of dollars overseas, and reduced governmental regulation), projected from this point to be back to the 2.3% range of the Obama administration.

Back to John Maynard Keynes and Harry Browne:

Keynes: “Markets cannot work properly if the money, which they assume as a stable measuring-rod, is undependable. Unemployment, the precarious life of the worker, the disappointment of expectations, the sudden loss of savings, the excessive windfalls to individuals, the speculator, the profiteer–all proceed in large measure, from the instability of the standard of value”.

Browne “you can’t have a sound economy without a sound currency”.

Does any of this sound familiar? These days it’s called a “wealth gap”, and politicians are calling for rich people to “pay their fair share”. Savings haven’t been “lost”, but they are earning next to nothing unless large risk is undertaken.

Where do we go from here? Quantitative Easing again, BUT MUCH LARGER. When an addict is hooked, each hit has to be bigger than the last, to maintain the high. The Fed balance sheet went from $900B to $4.5T, a quintuple, and will only have come down by about 18% to about $3.7T. Never before in the history of the planet has ongoing monetary accommodation (including $1 trillion current deficits) been necessary in the middle of a (relatively) strong economy.  In addition to the modest reduction in the Fed balance sheet, short term interest rates, after going slightly negative, have only risen to 2.7% before the Fed said “basta” as the economy threatens to roll over. We can only imagine how much capital will need to be injected by the Fed, and how low or negative interest rates will be taken to counter the next recession.

In conclusion: Don’t believe the economic fiction that we need not fear inflation, from accommodation of the past or from further stimulation, that deficits don’t matter, that the new Modern Monetary Theory will keep things under control. All kinds of assets have already been inflated in price, and that wealth effect has clearly been enunciated as a goal of the Fed. Unfortunately, the benefit has not been spread equally among citizens, and this is a worldwide problem. The saddest part is that the politicians of today, just as in the past, show no inclination to correct the fiscal/monetary policy in a constructive way. The longer  this financial party continues, the worse will be the hangover.