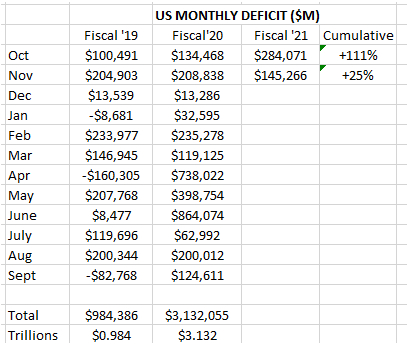 SEMI-MONTHLY FISCAL/MONETARY UPDATE – THE MOVE IN GOLD, AND THE GOLD MINERS, HAS JUST BEGUN!

The capital markets continued to be supported by the Federal Reserve Bank’s continued accommodation, in its effort to counter the pandemic related slowdown. The Fed’s policy, to do “whatever it takes”, not even “thinking about thinking about” higher interest rates or tighter money, supported most asset classes, including gold bullion (up 10.8% in July, and up 29.8% YTD) and the gold mining stocks (which did even better). Our Investment Partnership’s portfolio, virtually 100% invested in gold mining stocks, has performed in a similar fashion. While we are pleased with the progress, we expect gold miners to continue to outperform bullion on the upside and feel it is only the top of the second inning for the major move to come. While gold bullion is now at an all-time high, the gold miners are still down more than 50% from their highs. We expect bullion to at least triple from here over the next 3-5 years and the gold miners to increase by a multiple of that. All the financial factors that the pandemic has brought into focus and magnified are still in play.

Prominent investment strategists at Goldman Sachs and other investment firms, as well as legendary investors such as Ray Dalio are now recommending gold and gold mining stocks as productive portions of a diversified portfolio. Virtually every point they make we have been discussing every month for seven or eight years. Goldman says gold is the “currency of last resort and there is more downside to come with interest rates”. Dalio points out that “China is an adversary, the dollar’s reserve status is at risk, there is no true ‘price discovery’ as the Fed is buying everything in sight, the deficits and cumulative debt are a huge burden on future economic growth, central bank balance sheets are exploding as they purchase stocks and bonds and gold bullion as well, all of which support an important allocation to gold”. Does any of this sound familiar?

In addition to the debt burden, another factor that slows the growth path is the aging population. The increasing portion of the US population represented by older people, similar to trends in Japan, China, and Europe, is shown in the following charts.

Lastly, an important feature of government spending in the US is the increasing burden of entitlements, social security in particular. Entitlements and defense make up about 75% of government spending, and that’s a major reason why the total budget is mostly (‘baked in the cake”. With everything else going on in the world, it is often forgotten that the social security system was put in place in the 1930s when the average life span of an American male was about 65, which today is about 80. There were also A LOT MORE workers contributing than recipients. The chart just below shows the steady contraction of that ratio, from 3.7 down to the low 2s.

The above chart is impressive….but the following chart shows numbers closer to the 1930s when FDR put the program in place, with 159 workers/recipient in 1940, decreasing to “only” 42 workers by 1945.

Combine the above charts dealing with Social Security with the reality of an aging population. Add to that what might be considered “anecdotal” in terms of our impression of the work ethic of the younger working age population. If “America’s Greatest Generation” of workers is being replaced by today’s youth, perhaps less convinced of the morality of capitalism, it is difficult to picture government spending coming down or GDP and productivity accelerating.

All of this is to say that central banks, around the world, will have no alternative to aggressive monetary accommodation. Governments, similarly, will do likewise with fiscal  measures. We can watch this play out currently on almost a daily basis, and this is at a scale unprecedented in modern business history. Gold bullion, based on many parameters which we have described previously, is as cheap now as it was in 1971, before it went from $35 to $850. At $850 it was likely “ahead of itself” but $300-400 would have been a rational range at that point. Accordingly, 8-10 times the current level, which discounted by 50% would be $8-10,000 per oz., can be justified today. The gold mining companies, leveraged to the price of gold, could (and should) go up by somewhere between two and four times that gain. This is the basis by which we suggest  that the gold mining stocks could increase by 10-20x their current levels.

With gold hitting all-time highs, and the gold miners at seven or eight year highs, you will no doubt hear a number of financial commentators suggest that “the easy money has been made”. Some will suggest taking profits, with an objective of getting back in at a lower level. We suggest that if you owned a stock that had gone from $11 to $20, but you think it will be $80 or $90 or $100 in a few years, would you sell it at $20 to try to buy it back at $19 or $18? Probably not :).

Over the very long term, gold should be considered a “store of value” rather than an “investment”. There is, after all, no dividend or organic growth.  At the present time, however, the investment characteristics of this asset class, substantially lagging the increased nominal prices of almost all others, are too compelling to ignore. That is why our investment partnership is 100% invested by way of the above approach.