FAT Brands (FAT) provided a promising update relative the progress within their multi-branded franchised portfolio. The pipeline of additional units to be added to the 2,369 December total allows for about 33% growth in units and approximately 50% incremental EBITDA on top of the $90-95M EBITDA run rate that is expected “post-COVID” by the end of ’22. The most important brands are providing the most impressive sales results and rate of openings. While the reported GAAP numbers have yet to “normalize”, the Adjusted EBITDA results showed progress in Q4 and quarterly results in ’22 promise to improve clarity and long-term credibility. While the risk of litigation, discussed below, overhangs the valuation at the moment, that noise would fade away quickly if the fundamentals come through and the current valuation will have provided a buying opportunity. We have written extensively about FAT in the past and those reports can be accessed by way of the SEARCH function on the Home Page.

FAT Brands (FAT) announced their fourth quarter ’21 and full year financial results yesterday.  Recall that four acquisitions, including eight brands, were made during the year, three of which were in Q4. There were therefore a large number of non-operating expenses flowing through reported results, as the Company was positioned to build on a base of 2369 locations (mostly franchised) that generate over $2B of systemwide sales. FAT Brands’ portfolio looks as shown below as of yearend ’21. Management has reiterated that the ’21 acquisitions are expected to generate an incremental $45-50M of incremental post-COVID EBITDA in ’22, to a total run rate by late ’22 of $90-95M. 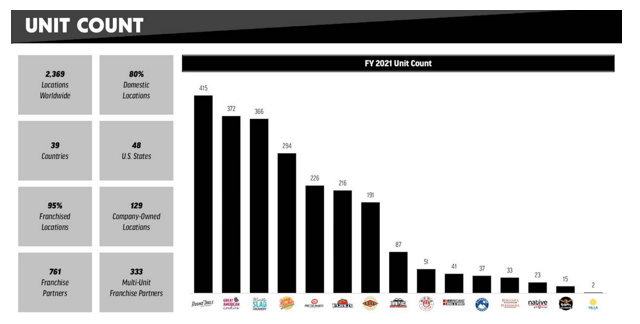 The summary of fourth quarter ’21 vs.’20 results includes: 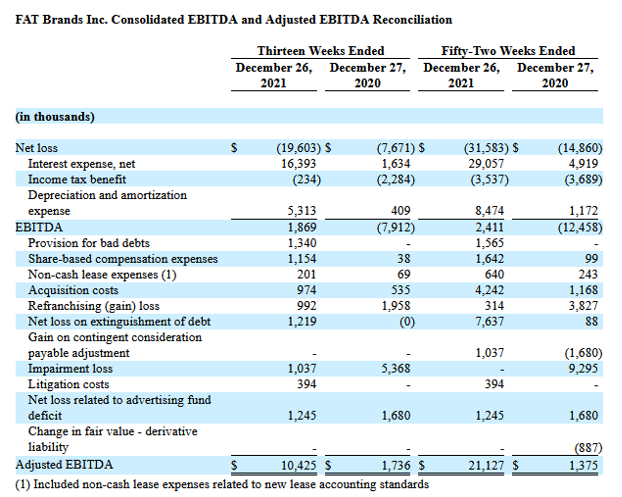 THE BALANCE SHEET and EBITDA EXPECTATIONS 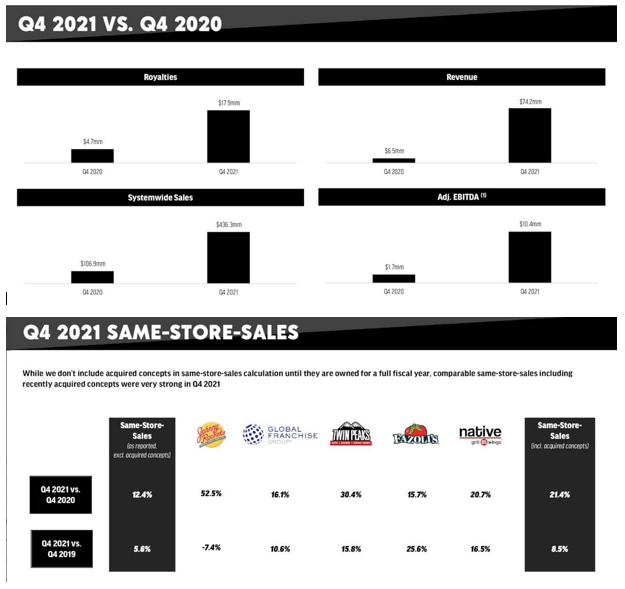 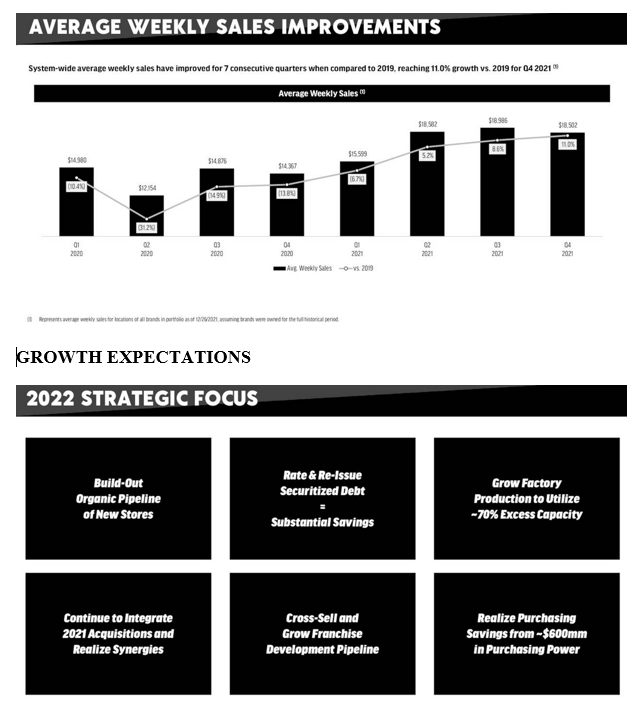 The development pipeline consists of approximately 850 locations, “mostly been paid for in full by our franchise partners”. There are more than 470 units between Fatburger, Johnny Rockets, Buffalo’s Express and Elevation Burger, plus 157 new locations for Global Franchise Group which includes Round Table Pizza, Great American Cookie, Marble Slab Ice Creamery, Pretzelmaker and Hot Dog on a Stick. There are 144 sports lodges for Twin Peaks and 114 drive-through locations for Fazoli’s. As of the end of the fourth quarter of 2021, 23 locations across the system, eight domestic and 15 international, excluding the recently acquired concepts, remained temporarily closed due to COVID-19 compared to 52 units at the end of the third quarter. Therefore further re-openings will add to growth in ’22 vs. ’21. It is expected that 120-125 new units, across the portfolio, will open in calendar ’22, twenty of which have already opened. Among the largest contributors will be 20 or more Twin Peaks locations plus 20 Fazoli’s, with both brands having far more long term potential. It is expected that Twin Peaks can add $30M to EBITDA in ’22 vs. ’21, with Fazoli’s adding $14-15M, these two brands alone providing a large portion of the ’22 vs. ’21 comparison.

Same store sales growth within the portfolio should also be augmented by delivery sales, even as dining rooms reopen, facilitated by the rollout of OLO and Captain, formerly known as Hunger, both of which are online ordering providers. Chowly, a third-party online POS system aggregator, is also streamlining the multi-channel delivery process.

Management expects the growth within the current portfolio to generate, on top of the $90-95M EBITDA run rate by the end of ’22, an additional 33% in units and $50M of EBITDA over the next five years or so.

FAT Brands management stated months ago that the primary focus in ’22 is to consolidate the multiple acquisitions made over the last twenty four months. While not eliminating the possibility of modest sized “bolt-on” synergistic additions, CEO Wiederhorn wants to ensure that maximum effort is pointed to realizing the growth and synergy opportunities within the current portfolio. The major brands are thought to be very capably led by their existing management teams, so there will not be potentially disruptive “efficiencies” imposed. There is no need to “fix” systems that are not “broke”.

We would be remiss to ignore possible investigations and litigation that involve principals of FAT Brands, even if apparently aimed at CEO, Wiederhorn, rather than FAT Brands itself. We focus our analysis on FAT Brands, the Company, its positioning and prospects and provide below Andrew Wiederhorn’s statement regarding this matter.

“I’d like to take a moment and address the pending government investigations and pending or threatened litigation. Being a public company and a public figure attracts its share of visibility. As previously disclosed, the company’s directors were named as defendants in the shareholder derivative action last summer brought by the same shareholder that had been a part of prior lawsuits against the company after the company’s IPO in 2017. None of those lawsuits prevailed as a court’s denied certification, yet the company spent considerable money defending itself in resolving matters. The most recent derivative suit is based upon the merger of Fog Cutter Capital Group into FAT Brands, a transaction is transformative for FAT Brands and led to its growth by more than 500% since the merger at the end of 2020.

“It’s important to note that this derivative action case does not assert claims against FAT Brands, but seeks recovery on its behalf, meaning any monetary settlement goes to FAT Brands, not paid by FAT Brands.

“Given my personal history, it does not surprise me that the government will look into allegations also raised in the derivative complaint. And as previously disclosed, the government is now formally seeking documents concerning these matters from the company and me. The government’s affidavit should not have been made public when it was a subject of the sealed court order.

“Nonetheless, the United States Attorney’s Office has indicated that the company is not presently a target of the investigation and that the investigation primarily focuses on me and my family. The LA Times article that published characterizations of the government’s position has many factual errors and conflates the different entities and my family as if they were one. I categorically deny the allegations raised in the L.A. Times article and look forward to the opportunity for our legal team to demonstrate that all transactions were properly documented, reviewed, approved and disclosed and that multiple independent professionals were involved including the Boards of both Fog Cutter and FAT Brands, outside counsel, outside auditors and my and FAT Brands’ tax adviser.”

CONCLUSION: Provided at the beginning of this article.