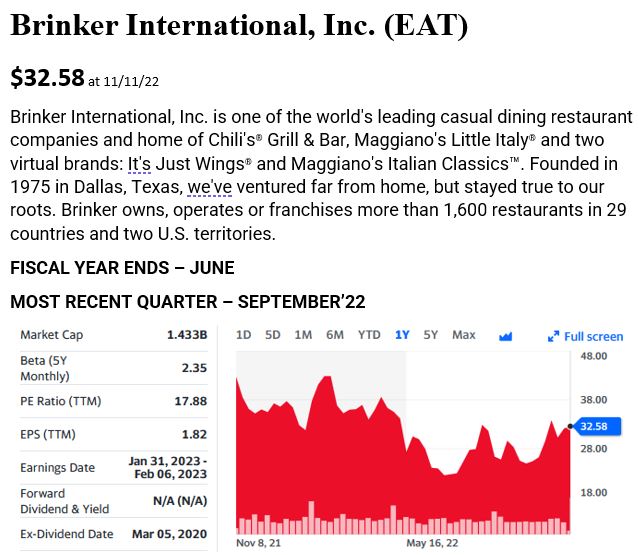 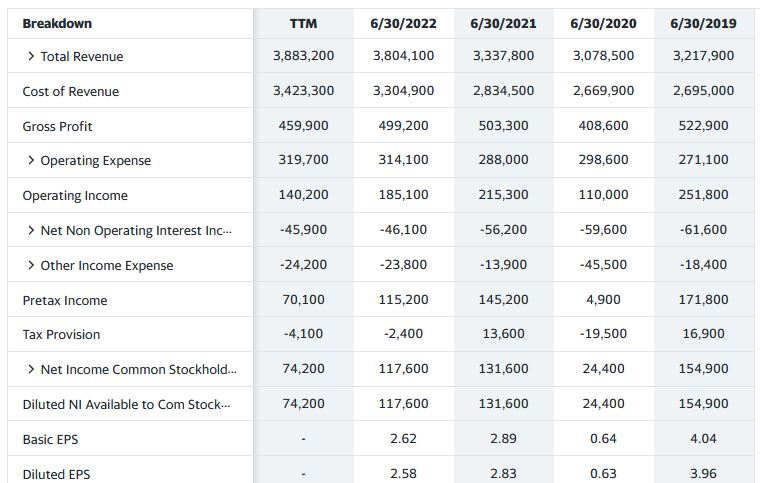 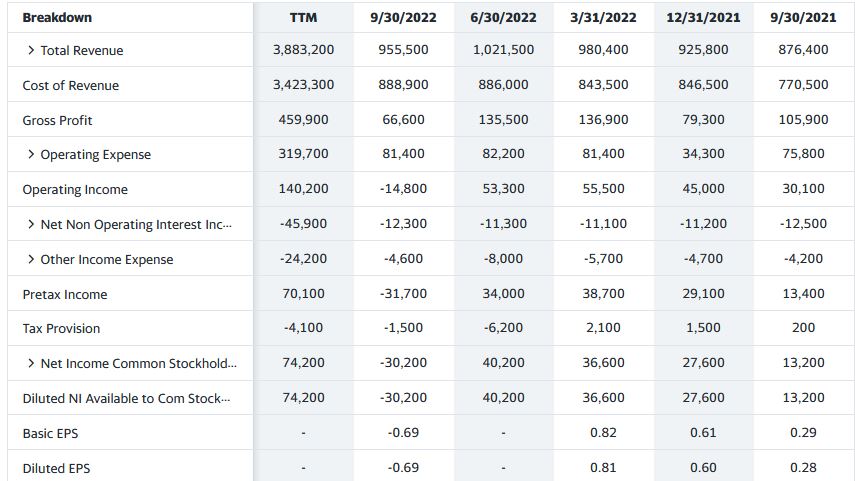 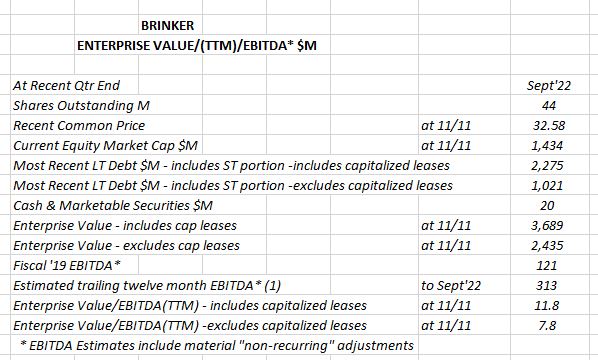 CONCLUSION: Selling at less than 10x earnings estimates for the fiscal year ending 6/20 and under 10x trailing twelve month EBITDA, EAT is reasonably priced statistically. The problem is that they are operating in a very competitive segment and continuously challenged to differentiate their commodity. They’ve done a credible job of controlling expenses, at the same time improving customer satisfaction, as evidenced by steadily improving comp sales. On the other side of the coin, typical of most publicly held restaurant companies, the growth of off-premise activity makes “dine-in” traffic comparisons even more negative than reported. Considering that off-premise is the primary source of sales growth, there are still too many restaurants out there and far too much square footage. It’s no accident that the best sales performance is coming from the small box (delivering)operators such as Wingstop and Domino’s. The 3.7% yield here is secure, the earnings improvement this year from their recent acquisition can likely be extended in fiscal ’21, but it is hard to see above average growth from there. They’ve already bought back a lot of stock, and the balance sheet leverage is fairly high (though it could be pushed further). Absent a catalyst that we cannot foresee, we don’t know why EAT would outperform the industry or the market on the upside.

The Brands: As of August 13, 2019 there are 1,613 Chili’s locations worldwide with 664 being franchised.. Chili’s has been operating restaurants for over 40 years with the first being opened in Dallas, TX. Chili’s original core menu was gourmet burgers, skin-on-fries and frozen margaritas. Today it is known for its gourmet burgers, fajitas and baby back ribs. As of August 13, 2019 there are 52 Maggiano’s locations. Maggiano’s is a full service polished Casual Dining concept offering Italian American cuisine. Average check in fiscal 2019 was $28.66.

UNIT LEVEL ECONOMICS COMMENTARY: The AUV increase at Chili’s was 2.0% as shown, including a menu price increase of 3.9%. Maggiano’s AUV was up 4.4%, including a 1.6% menu price increase. The increase in COGS, up 30 bp to 26.5%, was caused from unfavorable menu mix and 20 bp increase in produce costs. Labor and Related costs increase of 10 bp to 34.1% was a result of higher wages which were partially offset by lower Manager Expense. Occupancy & Other Related Expenses rose by 130 bp to 26.2%. This was a result of higher Rent Expense associated with new operating leases, as well as higher Advertising & Marketing Related Expense. Store level EBITDA was 13.2% of total restaurant revenue for fiscal 2019. This was a 170 bp decrease from 2018 fiscal year results. This decrease was primarily a result of the increase in Occupancy and Other expense.

SAME STORE SALES COMMENTARY: Comparable restaurant sales represent locations that have been opened at least 18 months prior to the start of the accounting period. The increases in the table above are inclusive of the menu price increases, which provides negative traffic in each case.

RECENT DEVELOPMENTS: Per Q1’20 Earnings Release and Conference Call – Adjusted EPS, as shown in the statistical template at the top of this article, shows a 12% decline to $0.41 per share., primarily due to the acceleration of stock based compensation expenses for newly retired executives. Operating Income, aside from Other Gains, was $30.3M vs. $35.8M, down 15.4%, though $3.5M of the $5.5M decline was the just mentioned non-cash stock based compensation. Chili’s company operated comp sales were up 2.9%, US franchise sales were up 0.4%, and Int’l franchise sales were down 1.3%. Maggiano’s company owned comp sales were down 1.8%. Restaurant operating margin (EBITDA) was 11.0% of sales, down 10bp from 11.1%, well controlled with CGS up 40bp to 26.7%, Labor down 10bp to 35.1%, Other Expenses down 20bp to 27.1%. This was the 6th consecutive quarter of positive comps and the 7th consecutive quarter of outperforming the peer group in terms of traffic. In terms of openings: One company owned Chili’s opened, One domestic franchised Chili’s opened, Eleven int’l franchised Chili’s, , for a total of Thirteen Chili’s systemwide. Most importantly, 116 Chili’s Midwest US franchised restaurants were acquired, representing about $300M of annualized sales, three weeks of which ($15.3M of revenues) were included in Q1 results. The purchase price was $99M, funded from the existing credit facility. Cash flow from operations was $86.6 million, which resulted in $66.1M of free cash flow after $20.5M of capex. Relative to the balance sheet, adjusted leverage totaled 4.1x EBITDA, expected to be the high point of the year, coming down to 4.0x by 6/30/20.

From a product and marketing standpoint, there continues to be an emphasis on the “3 for 10” platform. A new and improved chicken product was rolled out. New products will continue to be developed, at the same time maintaining the narrowed focus that has served EAT well over the last two years. New table top devices are being rolled out and development of hand held units continues. Food to go, both takeout and delivery, is an important growth area, with two thirds of off-premise sales by way of digital channels. Off-premise sales was up over 25% in the quarter, now representing about 15% of total sales. Takeout is apparently growing roughly at a high single digit rate, reduced lately by the faster growth of Delivery. Improved packaging is a current emphasis, to reduce cost and increase customer satisfaction.

In terms of expectations, comp sales and margins are expected to be little changed from recent trends during the balance of the current year. Reference was made to “a little bit of headwind” affecting the somewhat higher end consumer at Maggiano’s, but bookings for the holiday season “look good”. While details were not discussed, earnings accretion, after interest charges, from the 116 store acquisition are likely expected to help during the balance of ’20 and then the fiscal year ending 6/30/21.

Welcome! To view this writeup from “home page”, click through at “publicly held companies”. Thank you.