The following discussion provides due credit to Shake Shack management’s capital allocation  process and, within its conclusion, provides the bullish argument that has consistently attracted long term investors.

The investment community has invariably given Shake Shack every benefit in terms of valuation, based upon the respect for founder, Danny Meyer, built upon in recent years by CEO, Randy Garutti and his team. Both equity and debt capital have been  inexpensive,  not only due to investor opinion of SHAK’s store level economics and long term expansion potential, but because the world has been living with abnormally low interest rates, which encourages high valuation of  stocks, bonds, real estate, art, crypto, etc.etc.

We called this deal, at the time, the “Deal of the Year”, and based upon the model below, it was among the Deals of the Decade or longer.  All credit to SHAK.  (The US Government should have done a $30 Trillion  fifty year zero at the same time.)

The model below shows that the $250M, received in March ’21, put to use in ’22, ’23 and early ’24, will have generated $311M of cumulative cash flow (EBITDA) at the store level by the end of 2027. This allows for repayment of the $250M, leaves Shake Shack with $61.5M in the bank, and $75M of annual store level cash flow at the store level. Even allowing for increased G&A to absorb part of that, the bond proceeds will have paid for itself by maturity and provided an ongoing annual $75M.

We have tried to make conservative assumptions. We only assume half a store year, on average, in year one of operations, with a year one 20% C/C return rate. This builds to the 30% C/C year three targeted return that management has been guiding to. We also assume that the average cash cost is $3M between ’22 and ’27, considering that the recent cost has been $2.4M, higher with drive thrus. If the cost per store is lower, or the C/C returns are higher, the benefit to SHAK would be even better than shown. We emphasize that this model is “broad brush”, absolutely subject to fine tuning, but provides an order of magnitude.

See the discussion below the table, relative to the possibility of note conversion. 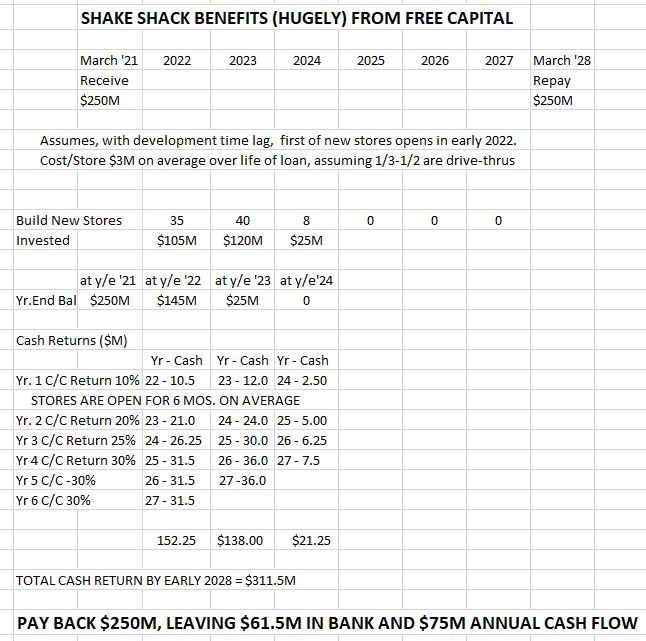 THE ALTERNATIVE TO DEBT REPAYMENT

It is possible that conversion to common stock, at $170/share, or a pre-conversion valuation of about $7B with the current 41M shares outstanding could still happen, though the current $55/sh needs to more than triple. That’s of course what the bond buyers were originally hoping for, upside potential from the common, while holding a (no-interest bearing) safer security than the common stock. That would also be an outstanding outcome for SHAK, since they would have $311.5M (less the G&A buildup) in the bank, along with the $75M of annual store level cash flow. After reading the discussion below, investors can judge for themselves the likelihood of a $7B valuation between now and early ’28.

At today’s price around $55/share, the Enterprise Value of SHAK is about $1.9B without capitalized leases, $2.6B including them. The trailing TTM Adjusted Corporate EBITDA as of Sept’22 is about $64M.

The table above shows that $75M of  annual store level EBITDA would have been added from putting the $250M to work, which G&A could adjust down to $65M/yr at the corporate level.

The $250M will have been used by early ’24, so by the end of ’27, several hundred million more will be spent, adding another $100M of store level EBIDA, adjusted with G&A down to perhaps $85M at the corporate level.

The licensing revenue run rate is about $35M per year, could conservatively double by late ’27 to $70M, which adjusted for G&A could add something like $30M to Corporate EBITDA.

These three elements added to the most recent Adjusted Corporate EBITDA TTM run rate; the utilization of the $250M convertible bond, additional capex between ’24 and ’27, and licensing growth bring the Corporate Adjusted EBITDA run rate to the neighborhood of $230M.

The current equity valuation (roughly the same as Enterprise Value, because the cash on hand more than covers the debt) of about $2.2B (halfway between the the values with and without capitalized leases) is not very high (9.6X) relative to $230M of EBITDA. Of course the $230M is five years away, and we have admittedly provided a bullish argument with many broad and even questionable assumptions. If that order of magnitude proves to be close, it is unlikely that the still growing company would sell for less than 9.6X EBITDA and could trade for two or three times that level.

Seven billion dollars, the value at the $170 conversion price, is 30.4x the possible corporate EBITDA run rate by the end of ’27 as modeled above. Though SHAK has traded at much higher valuations that that, reducing that future possibility is the fact that SHAK will be growing much less slowly in ’28 than it was 10-15 years earlier. We doubt the valuation will rise sufficiently for conversion of the convertible debt to be profitable compared to the original issue price, but based on the current corporate liquidity and the predictable ongoing corporate cash flow from operations, the bond should be “money good”.

Relative to the appeal of SHAK at the current time, the potential remains very substantial but there are more than adequate uncertainties. Aside from macro economic concerns, Average Unit Volumes at new locations, store level EBITDA margins at all stores, and the level of corporate G&A all provide question marks.  While we have attempted to provide realistic assumptions, it’s a lot easier to build an excel spreadsheet than create $165M of incremental cash flow.  Very few companies take annual EBITDA from $64M to $230M in five years.

At the same time, you can see why Randy Garutti and Co. continue to be charged up.