Inflation is in fact the real concern, but not necessarily the kind the journalists are talking about. The headlines are all about supply channel distortions that lead to a rise in commodity prices and the increase in minimum wage that drives labor costs up. Those are ripples in the inflationary sea compared to the tidal wave that is lurking offshore. It just so happens that the dangers we are about to describe hang over us just as the economy is already cooling. Open Table data shows indoor dining during Christmas week was down 33% from 2019 and Jeffries’ economist just cut their Q1 Real GDP Growth estimate from 6.6% to 1.5%.  Here’s the problem. A large part of the “recovery” in the economy has been generated by consumers taking their savings rate back to 6-7% from over 30% at the beginning of the pandemic and the wealth effect due to home values and stock market indexes near record highs. Even with household wealth (on paper) at record levels, consumers’ sentiment is the lowest in at least 13 years, the lowest in 40 years by some measures. The “wealth”, however, is largely a mirage. Over half the return in the S&P 500 since April has come from five stocks, the concentration higher than 1969 or 1999, before those bubbles deflated. A number of prominent bubbles have already deflated, including the SPAC universe, and Bitcoin is down 33%. Stock in the Robinhood trading platform is down 50%, amplified by the declines of over 50% from the highs in Game Stop and AMC. All of this is to say that tens of trillions of dollars printed by central banks around the world has had a predictable effect. Until recently it did not impact food prices but asset inflation drove the wealth effect that has kept the music playing for over ten years. We doubt that our Federal Reserve leading worldwide central banks, and the conspiring political class, will have the political will to take the punch bowl very far away. The attempt to do so, however, could be very unpleasant.

Restaurant stocks, on the other hand, have corrected materially from their much higher valuations in the Spring of 2021. Especially since many well-run chains have discovered new profit centers by way of servicing off-premise diners, and could even produce record high profit margins once the pandemic dust finally settles, the fundamentals at the current valuations justify a fresh look. For example, five well established restaurant chains, starting at the top of the alphabet, BJRI, BLMN, CAKE, CBRL and CHUY, on January 5th are down an average of 28% from their highs last May. While it is true that QSR chains are actually up 10-15% over the last two years, that is distorted by the extraordinary performance of Domino’s, Papa John’s, Wingstop and Chipotle, all major beneficiaries of the pandemic. Absent those, the rest of QSR is down as well.  The five IPOs of ’21, DNUT, SG, FWRG, PTLO and BROS are down a similar 29% from their post IPO highs. The two rapidly growing service companies, TOST and OLO, are both down over 50% from highs, more extreme declines no doubt due to the fact that, promising as they are, neither is yet profitable. At this point investment in “best of breed” companies is one way to go, with names like Darden, Cheesecake and Texas Roadhouse in full service, McDonald’s and Starbucks in QSR. Priced much lower, at 6-7x near term EBITDA are mature chains such as Bloomin’ Brands, Brinker and Ark Restaurants in full service. Well established franchising companies, here to stay (and grow), in spite of recent disruptions, are companies such as Ruth’s Chris, Jack in the Box and Restaurant Brands, now trading at near term EBITDA multiples in the low teens. All these valuations are 25-40% lower than just seven to eight months ago.

Over one hundred percent has been made in less than a year in a restaurant stock that has been publicly held for almost forty years, namely Luby’s (LUB). Some of us remember when Luby’s “wrote the book” in the cafeteria business, with highly paid store managers leading a great operating culture. As late as 1999 LUB was paying $.80 per share in dividends. After a $49M loss in ’01, including a $30M write-down, the Pappas brothers, highly regarded Houston based restauranteurs, bought effective control (9% of the Company for $10M). Importantly, at that time the Company owned the land and building under 125 of their 219 restaurants. LUB has lost money in 12 of the twenty years of Pappas ownership. In the course of it, Fudruckker’s was bought in 2010 for $63M in cash, with 59 company operated stores (22 with land and building) and 129 franchised restaurants. In 2012 LUB bought Cheeseburger in Paradise for $10.3M in cash, with 23 full-service restaurants in 14 states. At the end of 2020 the Company consisted of 61 Luby’s (42 with land & building), 24 company operated Fudruckker’s (9 with land and building), 71 Fudruckker’s franchised locations, zero Cheeseburger’s. In late 2018, with the stock at $1.50, an activist investor initiated a proxy contest against 36% Pappas owners, which precipitated a Board decision in May ’19 to “consider strategic alternatives”, resulting in a September ‘20 decision to liquidate LUB with an estimated $3.50 per share value. So far $2.00 per share has been paid out, with an estimated additional $3.00 per share to come. This result illustrated, as this column suggested back in September, that the dirt can be worth more than the operations. It also didn’t hurt that both the Pappas brothers were over 70, likely an incentive to monetize their long-term holding in Luby’s. 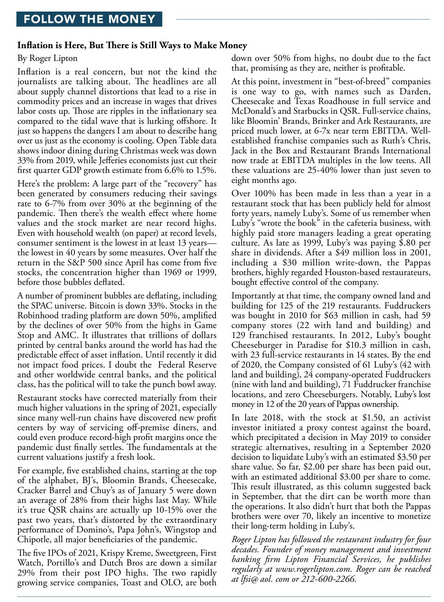