Our initial discussion of ARKR (at $19) was in April ’20 and our update in September ‘21 (at $16) described the underlying value within this Company. Both reports can be accessed by the use of the SEARCH function on our home page.

The appeal of ARKR lies in the demonstrated cash flow, the long-term value in the underlying real estate, the dramatically increasing participation in the rapidly growing southeaster US (Florida and Alabama) and the substantial long term “kicker” from their involvement in the NJ Meadowlands gambling venue. Though every aspect of the shareholder value equation has improved over the last nine months, we attribute the continued undervaluation to the normally very light trading of the common stock, and the secure control (with 36% ownership) of management. ARKR (at $17) is trading at only 7.6x trailing 12 mos. EBITDA (including a pretax loss in the normally profitable first six months), which should look even better as recovery from the worst of the pandemic continues.

The current liquidation of Luby’s (LUB) at a value many times what it traded for less than a year ago is unrelated to ARKR but reminds us that underlying value does not get ignored forever.

We believe that the assets within Ark could be monetized for a total value somewhere between two and three times the current stock price. Our expectation (with no guidance from management) is that the dividend, which could easily begin at the old $1.00 annual rate will be reestablished within the next twelve months (subject to the Covid), providing a handsome current yield that could go higher over time. While management is clearly content building long term value in the current fashion, CEO and controlling shareholder, Michael Weinstein, is in his seventies and his inclination to monetize assets and provide liquidity for ARKR shareholders could obviously change for any number of reasons.

The following table provides the annual revenue breakdown by geography. It is clear how Florida has become much more meaningful, how NY and Washinton, DC, have continued to negatively impact results in 2021 (reasonably expected to improve), and also how material Las Vegas is, considering that those leases are in the process of being renegotiated. We note that Ark has lost $5M in revenue due to restaurant closures since 2020, namely: Gallagher’s Steakhouse & Gallagher’s Burger Bar which did $2.2M in 2020 before closing last year; Thunder Grill in Washington DC, which generated $1.03M in 2020; and Clyde’s in New York City which did $2.04M in 2020 before closing down in 2021. 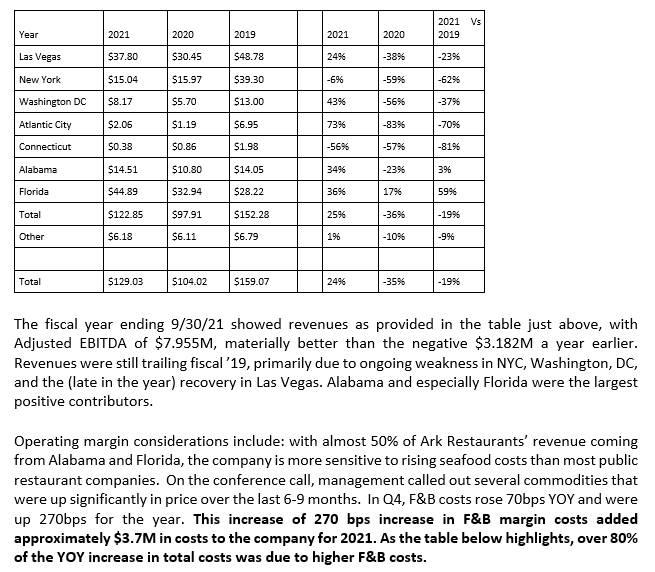 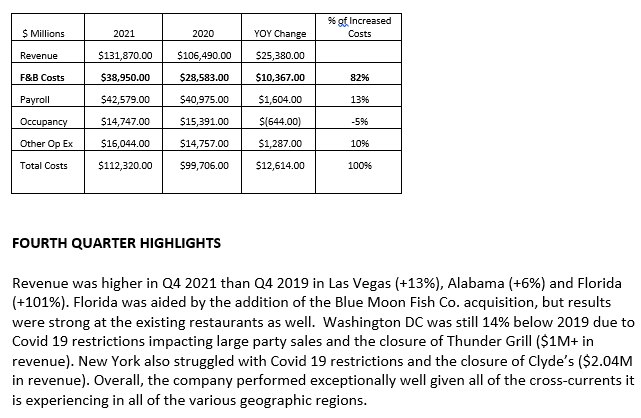 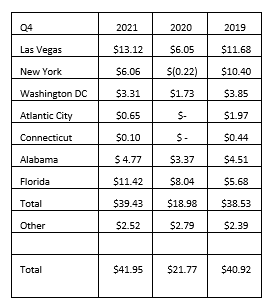 On the call, management called out a couple of examples of higher seafood costs. For example, six months ago the company was paying $23 a pound for King crabs (1 out of 4 people order King crabs at the Rustic Inn. A typical serving is 2 pounds of crab and originally retailed for above $75 for a 39% margin. At its peak the prices rose to approximately $53 a pound and the company raised the price to $125, which resulted in only a 7% margin. Product costs as a percentage of sales at the Rustic increased from 43% to 57%. The company was carrying $2.3M in inventory at the end of the quarter, which is nearly $1M or 50% higher than last year. A second example was the price of conch products, which are used at Shuckers. The price went from $300 a case to $1250 a case. The current price is around $750 a case. If commodity costs can revert to more normal levels, there is the potential for a $1M-$3M increase in operating margins.

One cost center that was favorable for the company was labor. Due to staffing shortages, the company was able to keep labor costs 200-250bps below historical levels. A 10-15% reduction in employees helped to offset the higher hourly labor costs.

CEO Weinstein said that the company is waiting on the new leasing contracts for their New York New York restaurants in Las Vegas (which has averaged about 30% of total revenues), obviously an important consideration. While 2021 revenue was $38M, which was down $11M from 2019, revenue in Q4 was $13M, 13% above 2019. Considering the lack of convention business and the Covid-19 restrictions in Vegas earlier in the year, a strong Q4 hints at a strong 2022. Payroll costs were flat YOY. Higher wages were offset by staffing issues that resulted in an 8% shortfall in employees (50 people short out of 600 staffing requirements. Company expects to spend $5-$7M on leasehold improvements. While rent will undoubtedly be higher, the Company believes that pricing opportunity can recoup a large portion of the higher rent.

Meadowland continues to dominate the sports betting market in New Jersey. 40% of online betting websites and 50% of on-premise betting is captured by the Meadowlands. The handle is around $500M, with a 6% hold (higher than the 5% expected long-term average). CEO Weinstein disclosed that the partnership had $15M in EBITDA, meaning that the partnership is cash flow positive and will not require any additional investments by ARKR. The company expects to receive a cash distribution to offset the reportable taxes from the partnership. On January 8th New York legalized online sports betting on January 8th and industry experts have estimated as much as 25% to 30% of sports bets in New Jersey are placed by New York residents. We expect to see an initial decline in betting at the Meadowlands, but New Jersey will most likely remain the second largest sports betting market in the county.

The next benchmark will be the issuance of three full gaming licenses for downstate casinos in New York City. Lawmakers are already pushing to start the process to award the three licenses by the end of the year. Key politicians to watch are Gary Pretlow, chairman of the state Assembly Committee on Gaming and Wagering and Joe Addabbo, the chair of the Senate gambling committee. According to CEO, Weinstein: “If that is advanced forward, we may get some action by the New Jersey legislature to progress forward the consideration of casino license in the northern part of the state, particularly the Meadowlands. Honestly, what I think happens, if there is a casino license issued, I think it takes about 5 minutes for Hard Rock to come to us and say, how much do you want for your position? “

There is no reason to “reach” for a deal. While potentially attractive new opportunities are always under investigation, a number of current properties provide expansion potential at negligible risk. In addition to the $5-$7M of improvements the company will make in Las Vegas, CEO Weinstein discussed several other projects. The Company is hoping to move the event space at their Robert restaurant located at the Museum of Arts and Design in New York City from the 7th floor to the 10th floor, at a cost of $2-3M, which would more than double that square footage and connect to the restaurant on the 9th floor. At JB’s on the Beach in Deerfield Beach, Florida (which is generating about $12M of revenues annually), ARK plans to build a deck over the top of the restaurant at a cost of $2-3M. At Blue Moon Fish Company, Lauderdale-By-The-Sea, FL, Ark is hoping to expand the deck which overlooks the intracoastal waterway to add 60-70 seats (more than doubling the current 50 seat capacity) at a cost of $2-3M. These projects combined will require close to $15M over the course of two to three years and should generate a very high return on invested capital. At the same time, the Company could easily raise debt capital, at an affordable rate, to finance opportunistic acquisitions such as Ark has implemented in recent years.

LAND – “they ain’t making any more of it”

Ownership of the land under a business, especially in an obviously attractive location, provides a material degree of financial strength to the operator. It’s been proven time and again that the land can turn out to be worth more than the business. In the near term for the operator, however, the advantages of land ownership are (1) No rent to be paid, so free cash flow is that much larger (2) A lower cash breakeven point, allowing for survival in difficult economic times (3) Easy borrowing capability if and when it becomes necessary (4) Based on number (3) a higher sale value for the business because the land can be so easily monetized. Of course, the reason that banks are so much more willing to lend to a business that owns, rather than leases, their operating property is because the land in essence “protects the downside”. If the business goes bad, the land value can be the savior.

Back to Ark Restaurants, and their LAND:

Over the last seven years Ark has purchased four restaurants including the underlying properties: Two Oyster Houses in Alabama (2017), Shucker’s (2016) and Rustic Inn (2014) in Florida. ARKR paid about $26M, five times the $5.2M TTM store level EBITDA at the time. In the last twelve months those properties generated about $8.5M in EBITDA (Out of about $20M of co-wide store level EBITDA), reducing the purchase price to close to only 3x the latest EBITDA. Most importantly here and now is that $8.5M has been generated without lease expense. Depending on the cap rate, ARK could raise on those four properties $30M, for example, which after rent could still leave well over $5M in store level EBITDA. That $30M could obviously be redeployed in the purchase of other properties, hopefully to be bought for 5-6x EBITDA, with margin improvement under Ark’s management a predictable objective. A great deal more than $30M could obviously be raised, for any combination of purposes. This simple exercise demonstrates how ARKR’s Enterprise Value of about $64M so substantially undervalues the Company.

CONCLUSION: Provided at the beginning of this Update