SEMI-MONTHLY FISCAL/MONETARY UPDATE – BELIEVE THE FED AT YOUR OWN PERIL!

I was amazed by Fed Chairman Powell’s remarks last week. Predictably he reiterated the Fed’s dedication to raising the inflation rate to a “symmetrical 2%”, i.e. over 2% for a while to compensate for the last ten years when it has been running under 2%. Forgetting about the fact that the Federal Reserve was formed in 1913 to control inflation, not create it: relative to the need for higher interest rates and less stimulus, he said “There will come a time—and that time will be when the economy is back to full employment, and taxes are rolling in, and we’re in a strong economy again-when it will be appropriate to return to the issue of getting back on a sustainable fiscal path, but that time is not now.”

Do you know how many years there have been since 1971, when the US went off the gold standard, that the US debt has not increased? Take a moment….. the answer is ZERO. Even in the last three years of the Clinton administration and the first year under GW Bush, when the “surplus” in total over the four years was $972B, the debt still increased every year, because “off budget” spending eliminated the so called surplus. In the fiscal year ending 9/30/20, for example, the US “deficit” was $3.1T and the debt went up by a cool trillion dollars more. As far as Jay Powell’s remark noted above, there will never be a time, not in his administration, and possibly not in our lifetimes.

AND THE NUMBERS ARE MINDBOGGLING

“A billion here and a billion there and pretty soon you are talking about real money” is the political commentary from thirty or forty years ago. Three zeros have been added, taking the billions to trillions, but the economy is not three zeros (1,000x) larger. Here’s another way to picture the situation: The US debt went up by $4 trillion last year and will go up by $4-$5 trillion more this year, even without the Green New Deal currently under discussion. The table just below provides a decade by decade (with mid-decade 1945, the end of WWII, thrown in) picture of the debt as a percentage of GDP. 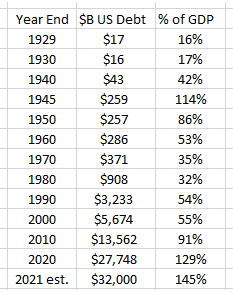 The most expensive prior single undertaking in the last hundred years was WWII, which cost $4.1 trillion in today’s dollars in total. The US government, therefore, will spend about double, over 18-24 months, the amount that it cost to conduct WWII over five years. The problem is that there is no postwar industrialization by a surplus nation on the gold standard to help us work our way out of this situation.

AND HIGHER TAXES ARE NOT GOING TO PAY FOR IT

We are hearing and reading about the Biden administration’s inclination to raise taxes to pay for the new infrastructure spending. Before you conclude that more taxes are unfortunately necessary to make the books balance, here are a few numbers.

Since the Federal Reserve is financing well over half of the deficit with freshly printed money, as their balance sheet expands at an annual rate of close to $2 trillion, an increase in personal income taxes, corporate taxes, social security or medicare taxes, especially the minimal estate taxes, would be of small consequence to paying back the cost of new infrastructure.  This is why the politicians always talk about RECOUPING, say $1 trillion of RELATIVELY SHORT TERM SPENDING with $100 billon of higher taxes on this or that OVER A MUCH LONGER TERM. Obviously, with the timing mismatch,  our legislators will have found trillions more to spend, and receipts can never catch up with expenditures.  Taxes could never be raised enough to make a serious dent in the increasing debt burden. It’s actually kind of ridiculous to bother the public with a long term ax burden when it is a lot easier for the Fed to instantly create an extra trillion dollars or so.

The Fed and the politicians like to tell us that all this newly created currency will not be inflationary, because the “velocity” of the funds is at an all time low, and  the price of goods and services (by their calculation) hasn’t changed much. Let’s create am extreme example. If one hundred trillion dollars worth of colored paper was distributed, do you think  quite a bit of it would start moving around and the price of goods and services would move higher?

Don’t ever believe that it doesn’t matter how much debt the US carries, as long as interest rates remain minimal. Someone along the way once said “there is no free lunch”.