Brinker’s most important Chili’s brand has been managed well in recent years, including the last twelve months,  and results should improve further,  but the longer term expectations at Maggiano’s remain uncertain. The introduction of It’s Just Wings as a virtual concept is promising. However, Brinker’s ability to defend its competitive position over time in this niche is not assured. Other large full service, or even QSR, chains with excess kitchen capacity could presumably compete just as well and Wingstop is not going away. Activists could be attracted by the cash flow and the re-franchising potential but the balance sheet, even with debt coming down, is already leveraged to a large degree. Net Lease Adjusted Debt, currently,  at about 4x the run rate of Adjusted EBITDA is not excessive  for a pure franchisor but is adequately high for a company operated chain.

FIscal ’21, ending June 30th, has become a “transition” year, and FY 6/30/22 is increasingly uncertain. The estimates of EPS for the FY ending 6/22 range from $3.60/share to almost $5.00, with the top end of the EBITDA guess at about $450M. The current stock price, at about 13x the high end of EPS with an Enterprise Value of about 9x EBITDA allows for some modest upside if the high end of performance expectations actually happen, but we have our doubts.  On balance we feel that Brinker (EAT) is fairly valued, with a great deal of the post pandemic recovery potential adequately discounted.

OPERATIONS AT CHILI’S ARE STRONG, MAGGIANO’S NOT SO MUCH

According to a National Restaurant Association survey, more than 17% of all US restaurants are now permanently or temporarily closed. That is more than 110,000 businesses and Chili’s seems to have been one of the  beneficiaries. On the recent second quarter conference call, management stated that Chili’s had increased its two-year trend of taking market share with a category leading 18% beat in sales and a 25% beat in traffic according to KNAPP-TRACK. The company’s broad menu and specials such as 3 for $10 and $25 Dinner for Two resonated with diners looking to dine out without spending a great deal of money.

In the second quarter, ending 12/23/20, Chili’s reported that same store sales only declined 6.3%. This compares favorably to other national chains that have announced results so far such as Olive Garden (-19.9%) and Longhorn Steakhouse (-11.1%). We expect that these results will also compare favorably to results at companies such as Bloomin’ Brands, Cheesecake Factory, Dine Brands and BJ’s when they report in the coming weeks.

While sales have held up fairly well, cost control at Chili’s has been even more impressive. Food and beverage and labor costs as a percentage of revenue were flat year over year. Occupancy and other expenses are up about 90bps due mostly to the costs associated with delivery fees. As a result of this cost control, operating income declined only $1.6M to $50M on a $45M decline in sales. 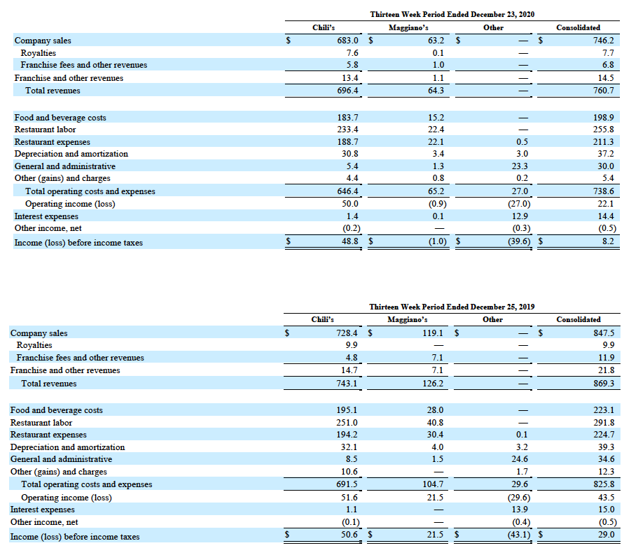 Because of the occupancy restrictions due to the pandemic, there has been a dramatic shift in the percentage of sales that are coming from to-go and delivery orders. The off-premise business at Chili’s has grown over 225% since 2018 and the pandemic has accelerated this trend. Historically, Chili’s, to-go and delivery sales were 14-17% of sales with 74% coming from to-go and 26% from delivery. However, in the first two quarters of FY21 off-premise sales were approximately 46% of sales, with 60% coming from to-go and 40% coming from delivery. Some of the shift has come from the addition of the virtual brand It’s Just Wings, to be discussed later.  For comparison, Olive Garden to-go sales as a percent of revenue is 37%. This ratio will decline for all full service casual dining chains as dining room capacity increases, but demonstrates that Chili’s food is apparently holding up relatively well when delivered.

Not well positioned to deal with social distancing, Maggiano’s emphasis is on family style dining and has a large banquet and group meeting business. For example, 17% of sales come from banquets and group meetings. The second quarter is the busiest time of year for this part of their business and sales were essentially zero this past quarter. The restaurants are much larger than a Chili’s restaurant, with 3X the square footage of a Chili’s and average unit volumes before the pandemic were $7.9M compared to $2.8M for a Chili’s. A sales decline such as almost 50% in Q2 predictably creates a huge deleveraging of occupancy costs. Restaurant expenses other than labor and CGS rose 1000bps to 35% of sales. Chili’s comparable expenses were only 28% of sales.

Another disturbing trend is that the average check declined significantly. Before the pandemic, the average check at Maggiano’s was about $28 (compared to $15 at Chili’s). The average check is now running around $22. This decline caused deleveraging on food and labor costs as well. All these factors are manifested in the huge decline in both sales and operating income. In spite of having sales that are $600M per quarter less than Chili’s, Maggiano’s saw a loss of $56M in sales compared to a $45M loss in sales at Chili’s. Operating income dropped $22M to a loss of $1M. As we discussed earlier, Chili’s operating income only dropped $1.6M.

HERE COME THE WINGS, AND MORE

In June 2020, Brinker International announced that it was rolling out a new virtual brand called It’s Just Wings (IJW). IJW offers wings featuring 11 sauces and comes with curly fries and a dessert option of fried Oreos. At this time, customers can only order through DoorDash or the website https://itsjustwings.com/. When the announcement was made, Brinker stated that there were three reasons for deciding to move forward with the concept:

On the second quarter conference call, management stated that IJW is generating $3M in weekly sales or $150M a year. While the profit contribution is not yet clear, these results seem to be a good start when you consider Wingstop took over eighteen years to achieve $150M in systemwide sales. Also consider that these results are being achieved without any major marketing support. Management revealed that the brand is seeing high satisfaction scores and strong repeat usage. However, at this point DoorDash is not sharing individual guest contact information so Brinker is not able to register these customers in their loyalty program. If the company is not able to convert these users to the Chili’s loyalty program that would be a disappointment.

Brinker wants to expand its virtual brands to further leverage restaurant operating costs. One possible concept that has been mentioned is called Plattered and Pies, apparently an Italian concept, which makes sense considering Maggiano’s Italian heritage. Another concept that CEO Wyman Roberts has mentioned in the past is a fast-casual Mexican brand, since the Chili’s menu has a significant number of Mexican food options on it. While the ultimate profit contribution from this effort is unclear, it seems that Brinker does not have to pay a commission to DoorDash, which would help profitability long-term.

The company ended Q2 2020 (12/23/20) with $64M in cash and over $594M available on its revolving credit facilities. Year-to-date Brinker has paid down $66M on the revolver and is well on its way to achieving its 3.5X Lease Adjusted Debt to EBITDA goal next fiscal year (from 4.5X last year). The two outstanding notes totaling $650M do not mature until 2023 and 2025. The company continues to produce significant free cash flow. Brinker has always been able to generate significant amounts of free cash flow. Cash from operations for six months  was a strong $130M, down only $12M from last year. Capital expenditures were only $37M, which means the company produced nearly $97M in free cash flow YTD. We would expect the company to resume its dividend payments sometime this year, though the resumption of the $0.38 per share dividend would not be huge at a 2.3% dividend yield.

As operating income from the owned stores has stagnated over the years, income from franchisees has become a significant source of corporate income and profitability. Franchise revenue generates a reported 90%+ profit margin and requires minimal absolutely required capital to grow. We interject here our often stated concern that too many franchisors short change their systems by not investing sufficiently to refresh the brand, as the same time increasing the franchisee burden with required advertising and operational fees. That said, the table below shows how this extremely high margin income stream has become a significant percentage of operating income for the company. Franchise revenue as a percentage of operating income has risen steadily over the last five years, from under 30% to approximately 50%. In fact, in FY20 it represented over 100% of operating income! While there is significant operating leverage ahead for the company stores as the impact from Covid 19 subsides, the growth in franchises, especially internationally, is going to be a significant source of income growth in the future. While the growth rate has recently slowed significantly, there remains a potential to franchise some of the current company store base.

In recent years, Brinker has been adding about 20-30 new franchise stores a year. Most of these stores are being opened internationally. As mentioned, the global pandemic has caused a significant slowdown in this development. In FY19, Brinker opened 23 franchise restaurants and originally projected opening 31-36 in FY20 (It only opened 25). Through the first two quarters of FY21, the company has only opened six (compared to 18 last year). The company is only projecting opening 9-12 franchise restaurants in FY21. This slowdown will negatively impact the growth in operating income for the next two years.

Now that the Democrats have reclaimed the Presidency and the two houses of Congress, the push for a federal $15 minimum wage has begun. We believe that Brinker has done a good job helping out its employees during this pandemic and has earned some goodwill with its front-line workers. For example, last year the company spent $17M on employee support by continuing to pay hourly employees and managers even though they were not working or reaching their profitability goals. However, that doesn’t mean that Brinker will be able to avoid any increase in the federal minimum wage. Brinker does pay above this rate in many of the states it operates in. This topic remains a political football, and was discussed at length on the recent conference call. As we see it, $15 federal minimum wage or not, labor costs move inexorably higher, but Brinker should be able to cope as well as anyone else.

One final material detail within the six month 10Q filing (ending 12/23/20) was the relatively large increase in the deferred gift card balance. Over the last six months it has risen by 20% or $20M, not affecting reported revenues or costs, but inflating cash flow over the period. Success in this area indicates that customers are continuing to find value in Brinker’s offerings and should  contribute to a rebound in sales, but the cash receipt has already been reflected.

CONCLUSION: At beginning of this article