While the valuation of PZZA seems high at 49X’21 EPS estimates and about 23x trailing EBITDA, these measures are against results that are still depressed from results just a few years ago. A substantial operating turnaround is now well established and it seems likely that systemwide unit growth will resume. There are a number of operating levers that can help: continued higher sales should expand franchising margins and encourage unit growth, re-franchising (especially with improved results at the stores currently operated by the Company) could generate a lot of cash, leveraging the current strong balance sheet could allow for a larger stock buyback or special dividend. It seems that there are a lot of ways to win by owning PZZA at these levels. Especially compared to its peer group of largely franchised QSR companies, PZZA seems undervalued relative to the higher earnings and cash flow that seem likely. For the same reasons, a private equity (including 14.4% owner, Starboard Value) or strategic buyer (at a premium price) could surface at any time.

Since our last update in November, 2019, Papa John’s business has improved significantly. For the first time since 2017, the North American division, as shown below has turned in five consecutive quarters of positive same store sales. While that may pale in comparison to Domino’s streak of 43 positive quarters of same store sales, it is a remarkable achievement for the company after comping negative for almost two years. In Q2, the company saw its two-year same store sales turn positive for the first time in 10 quarters. Though it is hard to delineate how much of the improvement the last nine months has come from the pandemic and the shutdown of thousands of competing restaurants, rather than internal organic improvement, it is important to understand that the company already had three consecutive positive same store sales quarters BEFORE the pandemic hit. Business has been so strong in ’20 that the company has hired over 30,000 new employees this year.

Recall that 11.1% of the 5,360 worldwide number of locations are company owned, as are 18.2% of the 3,286 North American units. The in-house delivery capability is also an important strategic asset.

While the pandemic has no doubt been a big factor in the turnaround in same store sales, the amount of new product innovation that has been occurring since Rob Lynch became CEO is unprecedented. The company has launched six new products in the last year alone. The company launched a garlic parmesan crust in November, which was the first ingredient added to the original pizza dough recipe in the company’s history. The company has also added, “Papadias”, Jalapeño Popper Rolls and the successful “Shaq-a-Roni” pizza, which was a collaboration with board member and franchisee Shaquille O’Neal. According to Mr. Lynch, in 2021 the company is going to have “the biggest launch we’ve ever done”. This will be the “Epic Stuffed Crust” pizza. Results in test markets has been encouraging. These new products are clearly resonating with customers and helping to drive the resurgence in the pizza chain.

There were several other encouraging signs that the franchisee system is healthy and can begin to grow again.

Franchisee stores have outperformed company owned stores recently, which is unusual. Franchisee owned stores rarely outperform company owned stores because a higher percentage of Company-owned stores are located in more heavily penetrated markets. The average annual unit sales for Company-owned stores is $1.05M compared to only $840K for a franchise unit. It is especially noteworthy that, as the table just below shows, in the last two quarters franchise owned units have outperformed Company-owned units by 700bps each quarter, no doubt indicating that the chain is picking up a significant number of new or lapsed customers. The company has said that, in the last two quarters, North America median unit profits have been the “highest in years.” E-commerce now accounts for approximately 70% of all orders, which also helps overall profitability and increases marketing dollar efficiency.

The company recently ended its “We Win Together” program that was started in Q3 2018 to help support franchisees after same store sales collapsed in the wake of the John Schnatter scandal. As a reminder, the program was a two-part program that provided royalty relief in the form of lower royalties, royalty-based device incentives and targeted relief. The second part was the agreement to make investments in marketing and brand initiatives to support the long term strength of the brand. Over the last nine quarters, these initiatives cost Papa John’s over $100M. While the plan was always scheduled to end in Q3 2020, the fact it was not extended shows how successful it was in getting the franchisees through a very tough period. We also believe it created a lot of goodwill among the franchises which is important if the company wants to continue to grow, both inside the US and internationally. 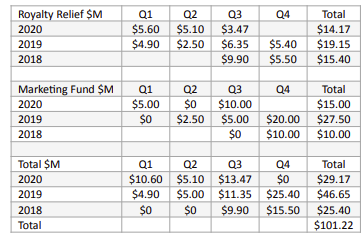 It is logical that the dramatic improvement in AUVs and profitability would generate a new level of enthusiasm within the franchise system. PZZA has in fact signed a significant new franchise agreement in September. On September 10th, Papa John’s announced its largest traditional store development agreement in North America in over 20 years. The agreement is with HB Restaurant Group, which already owned 43 restaurants in the Mid Atlantic region. The agreement calls for HB to open 40 new stores in Philadelphia and southern New Jersey between 2021 and 2028. After shrinking the store base in North America for years, the company reported net unit growth of two in Q3 ‘20. This is important because at 3,142 stores, the company has less than 50% of the store base of both Domino’s (6,239) or Pizza Hut (6,653). This means that the company has a significant amount of potential growth ahead of it in North America and could now begin to grow again. It is interesting that Pizza Hut recently closed 700 stores in the US, obviously lessening the competition somewhat.

Re-Franchising is a Potential Earnings “Lever”

It is important that the company owns significantly more stores than its peers, Domino’s and Pizza Hut being virtually entirely franchised, obviously  providing an opportunity for re-franchising. Papa John’s owns approximately 600 stores compared to around 125 for Domino’s and 23 for Pizza Hut. The company could lower its ownership base to only 2-3% of the total North American store base (similar to Pizza Hut and Domino’s), by selling 530-540 stores to franchisees. This would improve margins, reduce debt and most likely result in a higher multiple of cash flow. Domino’s has stated it wants to grow its US store base by 2,000 units to over 8,000, which shows the huge growth opportunity in North America for Papa John’s. Internationally, Domino’s and Pizza Hut have more than 5X the number of restaurants of Papa John’s.

The eight consecutive quarters of same store sales declines from 2017-2019 caused a 700bps decline in the operating margin between 2017 and 2019. General and administrative expenses were deleveraged by 530bps over this time. This has resulted in G&A costs as a percentage of system wide sales to be significantly higher than any of the company’s highly-franchised peers. However, the large increase in same store sales over the last two quarters has helped the company generate significant expansion in margins. 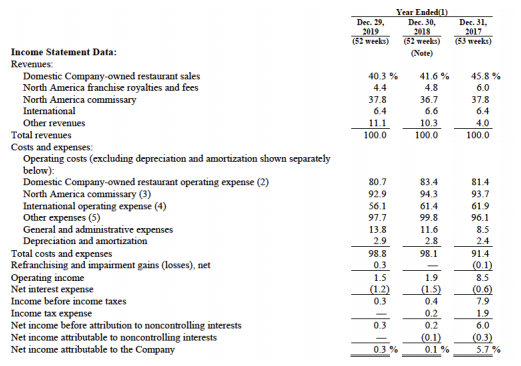 For the nine months ended September 30, operating income margins expanded by 220bps and pre-tax margins have expanded by 360bps. According to SEC filings and conference calls, the improvement in margins is a direct result of operating leverage due to the 20%+ same store sales increases the last two quarters. While we expect a moderation in same store sales increases in the coming quarters, the recent results highlight the significant operating leverage inherent in the business model. In 2016, the EBIT margin was 9.6% or DOUBLE the current margin. We see no reason that a combination of continued positive same store sales (driven in part by continued innovation), accelerated unit grow and the sale of several hundred company stores to franchisees could eventually drive margins back to those levels. 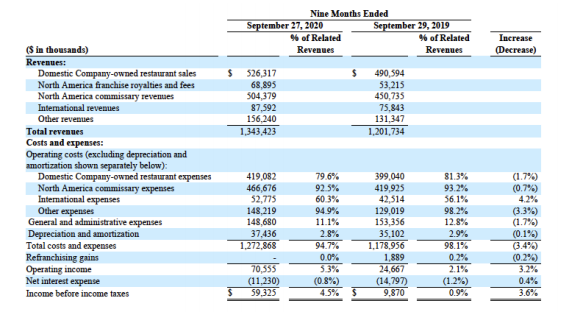 As we noted earlier, Papa John’s G&A as a percentage of system wide sales is significantly above its peer average. The combination of selling a significant number of stores to franchisees, restarting North America franchisee unit growth and the continued expansion of international units should help drive this ratio closer to its peers. 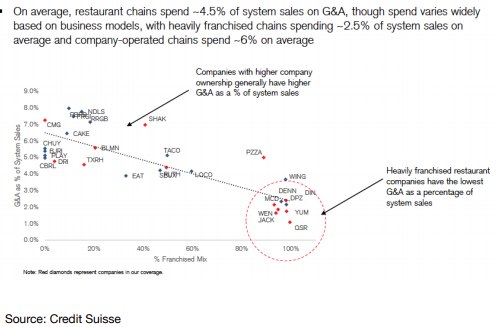 The improvement is sales has significantly improved the company’s finances. For the nine months in 2020, the company generated $169M in cash from operations, which compares favorably to the $50M the company generated in 2019. The company also received $29M in proceeds from the exercising of stock options due to the higher share price in 2020. As a result, the company has a cash balance of $140M compared to $28M in 2019. The company also announced a $75M stock buyback. It is particularly noteworthy that the long term debt is much lower than at other franchised chains. Dunkin’ Donuts, Restaurant Brands, Domino’s, Wingstop have carried debt at 5-6x times EBITDA. PZZA, on the other hand is carrying long term debt, net of cash, of only about $200M, a much lower multiple of depressed EBITDA of  $78 (’18) and $72M (’19), an improved $108M for nine months of ’20 and an aspirational pre-crisis $205M in ’17.

In February 2019, with the company struggling financially after the Schnatter scandal, the company issued $252M worth of Series B Preferred Stock convertible at $50.02 per share (5M shares) to Starboard Value LP. In connection with the investment, the Papa John’s Board of Directors was expanded to include Jeffery Smith, the CEO of Starboard and Anthony Sanfilippo, the former CEO of Pinnacle Entertainment. This Preferred Stock, if converted, will increase the shares outstanding by approximately 13%. In addition, the preferred has a 3.6% coupon that is costing the company about $10M a year in dividends. In February 2022, the coupon goes up to 5.6% ($14M in dividends) and in February 2024 the coupon increases to 7.6% ($19M). The preferred is redeemable by either party in February 2027.  While the deal Starboard negotiated nine months ago looks pretty sweet today, the original 3.6% coupon was not terrible at the time and the conversion price was almost 20% above market.