GAMESTOP, BED-BATH, AMC UP OVER 100% IN DAYS, BEST SHOT IN RESTAURANT INDUSTRY??

We can’t help notice the speculative fever raging in the stock market, epitomized by the almost $100B that has been raised for SPACs in the last twelve months, the huge move in Bitcoin since the summer (though it’s down 25% in the last week or so), and, most recently the monstrous move in stocks such as Gamestop (GME) from $30 to $250 in a week, Bed, Bath & Beyond (BBBY) from under $20 to over $50 in two weeks, and AMC Entertainment (AMC) from $3 to $20 in three days!!

No doubt that the move is due to traders (especially the Reddit and Robinhood trading platforms) attacking certain companies with the highest amount of stocks sold short relative to the share “float” and the average trading volume. Short sellers are forced to buy their shares back as margin calls take place, driving the stocks ever higher. I have been investing for over four decades and I have to say that this degree of speculation in stocks that are already public is unprecedented. Even the dotcom speculation of 1999-2000 was largely in new issues, with stocks doubling as they came public, not in existing public companies.

On one hand, this speculative bubble means we are closer to a top than a bottom in the market. However, for those of us that don’t mind the obvious risk of the general market running out of steam, we have put together a list of publicly held restaurant stocks, tabulating those with the highest level of short selling. Our objective is to find a couple of stocks that are not excessively valued relative to the prospects, companies that are here to stay, but have a chance of “catching fire”. We have tabulated the restaurant stocks with the highest level of shorting relative to the “float” of public shares outstanding. That is shown in the first chart below. The second chart ranks the stocks according to the shares sold short compared to the average daily trading volume. Ideally, a high percentage of shares sold short relative to the float, would combine with a rising level of shares sold short  versus average trading volume (i.e.short interest ratio).

RANKED IN ORDER OF SHARES SHORT VS. PUBLIC FLOAT 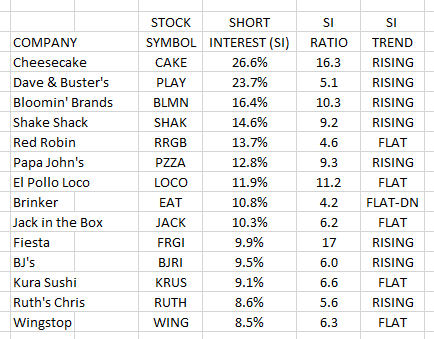 Within the top portion of the above chart, we are most comfortable with the fundamentals at Cheesecake, Papa John’s, and Pollo Loco. We have written up CAKE and PZZA with a positive bias recently and LOCO has come through the pandemic relatively well. PLAY and SHAK stocks have been moving higher but the fundamentals of both, as we have written, are in question. 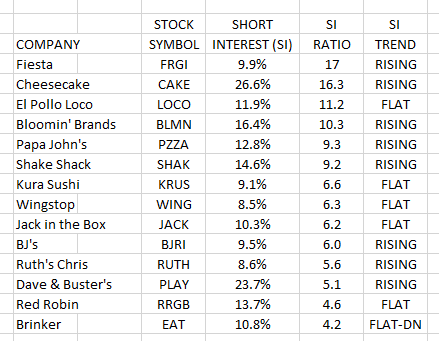 Putting it together, we believe that Cheesecake (CAKE), Papa John’s (PZZA) and Pollo Loco (LOCO) provide the best reward/risk equation. None of these three situations seems overvalued in a major way and could provide the short term traders among us with the most sensible approach.