The general capital markets were strong in June: equities because investors came to the conclusion that the Fed “put” is back in place, and bonds because the Fed tightening (“QT”) is behind us. Gold and the gold mining stocks were strong as well, for lots of overdue reasons, a couple of which  are discussed below. Gold bullion was up 8.0% and gold mining benchmarks were up 18.4% (the average of ETFs,  GDX and GDXJ) and 16.2% (the average of precious metal mutual funds (TGLDX, OPGSX, and INIVX) respectively. Our  portfolio was up in line with the benchmarks. The  subject matter below describes only a couple of the many reasons that justify the recent overdue action in gold and the gold mining stocks.  Reminds me of the song “we’ve only just begun”.

THE SINGLE BIGGEST REASON TO OWN GOLD RELATED SECURITIES !!

The most important justification for our our ownership of precious metal related securities is the 5,000 year history of gold being the safest and surest protection of purchasing power. Gold is a unit of exchange and a store of value. There has never been an unbacked “fiat” currency that has survived. It is just a question of time until the politicians of the day dilute their currency into oblivion and today’s politicians (of both parties) are clearly on the same path. Our portfolio represents gold as the safest currency and we believe that the history of the quantity of gold owned by Central Banks relative to the amount of paper currency they have created (M2 or “FMQ” as shown on the below chart) is indicative of where we are at the moment. You  can see from the chart below that gold bullion relative to M2 was at a low in 1970 (before gold went from $35 to $850/oz. and 2000 (before gold went from $250 to $1900). Lo and behold, gold is at that level again today. In terms of a price objective, we believe $850, the top of the parabola in 1980, was too high. Probably $300-$400 was more appropriate. The move from $250 in 2000 to $1900 was more justifiable, based on our standard that the gold owned by Central Banks should be in the range of 25-40% of the paper currency out there. This is the range between 1790 and 1913, before the creation of Central Banks, when inflation was zero and real GDP growth averaged 4%. This is how we conclude that an appropriate price of gold today is perhaps $5-7000 per oz. Of course, this price objective is moving higher all the time as more paper currency is created. Two or three years from now, the objective could well be $9-10000/oz. We conclude that just because gold has gone from a low of $1050 a couple of years ago to $1400 now, we will not be tempted to lighten up any time soon. If we had a stock that had gone from $10.50 to $14.00 and we thought the upside was north of $50.00 per share, that would be a lot of money to potentially leave on the table. Don’t forget that the mining stocks, depressed as they still are, could move 2-3x as much as the gold price. 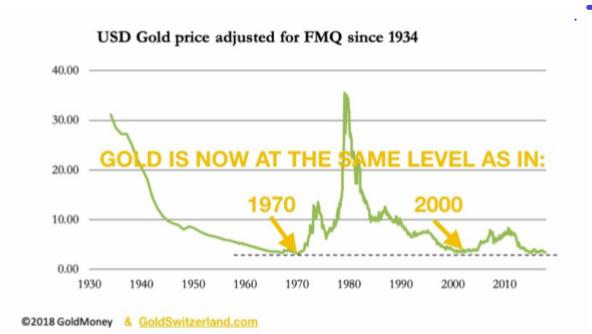 We like to keep our letters short, but since we recently reviewed the “state of the union” in terms of the current deficit, we present the information below. This part of the puzzle is important because it indicates how much new paper “fiat”, unbacked, currency must  be created to fill the deficit gap. We predicted a few weeks ago, when we published this information here that the deficit for the current year would be over $1 trillion. The Congressional Budget Office has now confirmed our work.

There are about 250 persons working at the Congressional Budget Office, according to their website. Their budget, according to Wikipedia was $46.8M annually, as of 2011, probably higher now. Their projections are widely quoted, and presumably relied upon by policy makers in our administration. The CBO updates their projections on an irregular basis, sometimes several times per year, sometimes only once per year. The update from 5/2/19, only two months ago has now been adjusted upward. Considering how far off their past projections have been, and the questionable assumptions within their analyses, it is a wonder that anyone takes these numbers seriously, and the latest installments provide a good example why not.

A brief two months ago, on 5/2, based on relatively firm numbers through March, and presumably pretty reliable indications through April, the CBO predicted that the US operating deficit through the current fiscal year, ending 9/30/19, would be $897 Billion. April and May results are now reported, and the table below shows the monthly numbers for the last two fiscal years.

You can see that last year’s total operating deficit was $779B, and the total debt went up by $1,271B (due to “off budget” items, the largest of which is the social security shortfall). The projection two months ago was for the current year’s deficit to be $897B, up 15.1% from fiscal ’18. The total debt is not projected, and you can see that number frozen the last few months since our administrators have already exceeded the formal debt “limit”.

The April result, with tax receipts generating the surplus (normal for April) of $160B, which was lower than the $214B surplus a year earlier, so the cumulative deficit through April (shown at the extreme right of the table) was up 37.6%. They May results showed a $206B deficit, up from $147B, so the cumulative deficit is up 38.6% year to  year. Last  year, the monthly deficits from June through September totaled  $246B. The CBO projection, on 5/2, of $897B for the ’19 year would allow for only $158B the rest of the year, down 36% from the last four months of fiscal ’18 – which was ridiculous.

We don’t have 250 professionals pushing numbers here but during the current year:  December’s YTY deficit reduction (which some might have considered hopeful) was on an  immaterially low base. March’s improvement was material, but March and April combined (tax season) showed a $13B surplus this year versus $5B in fiscal ’18, which is an immaterial change. May bounced back to a 40.1% increase YTY in the deficit. You can see, along with ourselves, that the last four months would have to be 36% lower than last year, improbable, to put it mildly.

Our projection, with 247 professionals fewer  than the CBO was for the following, and we published this conclusion several weeks ago: The last four months would provide a deficit about  40% higher than a year ago ($247B), which would provide for $346B  on top of the current $739B, for a total of $1.08 Trillion. This is 20% higher than the $897B projection made by the CBO with only five months left in the fiscal year. We shouldn’t have to point out that: if the CBO was 20% off the mark with five months remaining, their projections ten years out don’t have a great deal of credibility.

We have presented a great deal of information in this letter, and our conclusions are justified by much more. The biggest single reason that gold and gold mining stocks are going up in price is that they never should have gone down in the first place.  All the reasons we have discussed over the last six or seven years continue to intensify.