Not much has changed fundamentally in the last couple of weeks. The economy is doing somewhat better, aided materially by increased government spending. Capex investment by corporations is still lagging, housing and auto activity are slowing as interest rates rise, the deficit moves predictably higher as health care costs, higher interest rates on the US debt, and much higher defense spending are long term facts of life. Though consumer sentiment and business optimism is much improved over the last year or so, consumers are still stretched financially and the possibility of a tariff “war” continues to unsettle capital markets and the business community.

Gold and gold miners have been quietly consolidating over the last few months, but had an uncharacteristically volatile day, on the downside last Friday.  That just happened to be an option expiration day, which often can generate unusually large price changes.  This type of volatility, heavy trading volume, especially at illiquid times of the day (“middle of the night”), and at inflection points for the technical chartists, used to be fairly frequent occurrences, in the gold markets in particular. It seemed like every time there was especially bullish news for gold, the price would get hit, with heavy volume in futures and options at times of the day when nobody “in their right mind” would be trying to liquidate a “real” physical position unless they were consciously trying to manipulate the short term price of “paper” gold. In any market where there are futures and options trading, aggressive traders of the “paper” who don’t have to immediately deliver the physical “underlying”, can trigger “stop loss” orders at certain predictable prices. Over time, these distortions get corrected, but the short term volatility can be unsettling. Longer term physical buyers use these distortions as buying opportunities, and it is no coincidence that China, India, Russia, and others have continued to be major buyers of physical gold, demonstrating their diversification of assets away from US Treasury issued securities. China and Russia, in particular, have clear reasons to undermine confidence in the US Dollar, improving trade and investment in the Yuan and Ruble, and a higher gold price would do just that. They understand the nature of the worldwide currency debasement and are doing what they can to cope, though our politicians lack the political will to do the same.

Friday, the fifteenth of June, was an option expiration day which, in and of itself, can increase price volatility. It cannot be coincidental that, after India and China had closed their physical trading markets, large quantities of gold futures contracts were dumped into the CME’s Globex computer trading system just before the Comex gold pit opened for the day (at 8:20 a.m. EST).  The chart below shows the price action, and note especially how the trading volume exploded higher from the typically much lower levels. IN ONE HOUR, from 8-9am EST, futures contracts representing 9.03 million oz. of gold traded, which is slightly more than the 9.01 million oz. of TOTAL GOLD STOCK in the Comex vaults, and 17.7x the number of gold oz. “available to deliver”. For the entire day, 49.5 million oz. worth of “paper” traded, the equivalent of about six months of entire worldwide production.

It does not seem farfetched to conclude that nobody in their right mind would choose this particular time of day and month to “dump” such a large quantity of “real” gold, unless the seller wanted the price lower. This has happened before, and an artificially low short term price gave way to much higher prices in the near future. No individual seller is larger than the worldwide market, over a reasonable period of time. A buyer at an artificially high price had better be prepared to buy “it all”, because they will own it. A seller, at a price lower than the true market would allow, had better have an enormous inventory because the buyers will keep coming. It will be interesting to see how this latest incident of seemingly irrational volatility gets resolved. 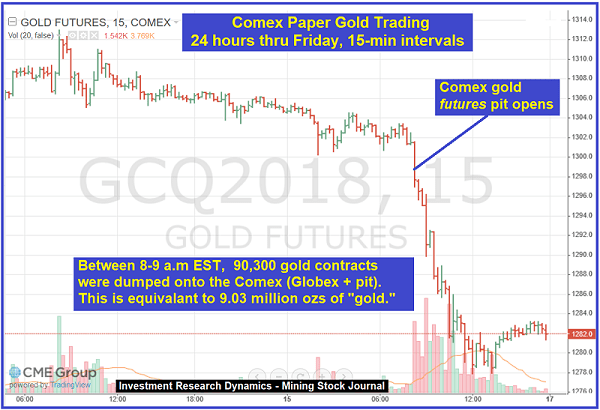