FOLLOW THE MONEY with Roger Lipton, reprint from 2-15-21 edition of RESTAURANT FINANCE MONITOR

Roger Lipton is writing a regular column for the monthly publication of the “must read” Restaurant Finance Monitor – provided below:

HOW MUCH WILL THE NEW STIMULUS RELIEF FOR CONSUMERS  HELP?

The answer is: not by much and not for long. It is naïve to think that the consumers’ pandemic induced financial trauma, just as with our parents after the 1930s depression, will not lead to a downward adjustment in longer term spending patterns. Surveyors at the NY Fed found that 2/3 of the 2020 stimulus went into savings or debt paydown. According to economist, (the best) David Rosenberg, bank credit to individuals is down more than 3% from a year ago, which hardly ever happens, and credit card balances are down 10%.  The household savings rate, as a percentage of discretionary income, spiked from 7% pre-pandemic to over 30% in late March and April. It is now running about 13%. Rosenberg says that if it settles at 10%, up from the 7% norm, that 3 point difference would trim retail sales in general by 10% and slice a full point off aggregate consumer demand in the future. Some restaurant segments will obviously be affected more than others, but this may be one reason that, even with the first new stimulus checks in the mail, BOGO and $1 menu items are being promoted again. There will likely be a short term relief driven uptick in consumer spending as vaccines and herd immunity take hold, but strong sales comparisons compared to a year ago should not distract us from longer term concerns.

MEATLESS PRODUCTS HAVE NOT CHANGED THE WORLD

Meatless burgers and other proteins went mainstream about 20 months ago. Several suppliers, most prominently Beyond Meats (BYND), received enormous publicity and many restaurant chains spent a great deal of money introducing new burgers, sausage and chicken substitutes. BYND came public at $25/share in May, ’19, and ran to $230 in just a few months (almost as good as Gamestop recently). BYND settled down and traded in a broad range between $75 and $150/share until just recently when deals with Taco Bell and Pepsico were announced. All you need to know these days, about the importance of meatless products to the restaurant industry, is that everyone is developing natural, not “meatless”, chicken sandwiches (thank you, Popeye’s, for leading the way). On our website 18 months ago, relative to the meatless craze, we suggested “this too shall pass”. This is not to say that a market does not exist for meatless proteins. It’s just that no particular restaurant will have an edge and there will be plenty of competition among manufacturers. The bright side is that the cost/unit is coming down as production ramps up, so restaurants do not need to price the product at a premium. Fundamentals aside, BYND trades, on February 8th, at $168/share with an $10.6 billion market value, at almost 13x ’22 SALES and over 200x ’22 estimated EPS. The music is playing so the dance continues.

A predictable question at every restaurant conference workshop is “how big do I have to be to attract private equity capital?” The panelists representing the various private equity firms dutifully describe the need for (1) well regarded management (2) excellent unit level economics (3) a concept proven in various markets (4) a well positioned concept, these days such as fast casual, rather than big box entertainment (5) a store level EBITDA of 20% of sales, amounting to at least $5M systemwide. On the other hand, my response would be: “It is not about size. Beauty is in the eye of the beholder “. Capital can be raised, perhaps not from Roark or L Catterton who are looking for “size” these days, but there are plenty of smaller private equity firms that can be seduced by a proven operator with a couple of units that are doing very well. I have suggested that, a while back Norman Brinker could have raised money with a concept alone, just as today’s “Norman”,  namely Danny Meyer. Enter the world of SPACs, where over ONE HUNDRED BILLION has been raised in the last thirteen months. BurgerFi (BFI) has been brought public. FAST is recapitalizing Tilman Fertitta’s empire. Tastemaker (TMKRU) is searching for an attractive restaurant chain, and Danny Meyer has just filed to raise $250M. It is not even necessary to have a specific concept in mind these days. The “beauty” of the sponsor is adequate. According to the release, Meyer’s SPAC, USHG Acquisition Corp. “plans to target ‘culture driven businesses……focus on industries including technology, e-commerce, food & beverage, health and retail and consumer goods.’ Relative to the current SPAC craze: this, too, shall pass, but, in the meantime, buckle up!

We are literally following the money by tracking insider buying. There are lots of reason for insiders to sell: portfolio diversification, taxes, kids’ education, divorce, etc. I knew a publicly held restaurant CEO who told me “the only reason I keep working is to afford a third divorce.” On the other hand, insider buying has only one objective and that is to profit from a rise in the stock. Over the last six months, among all the publicly held restaurant companies, I found the following: At Carrol’s (TAST) insiders bought 56,300 shares at $5.25 in November. At Del Taco (TACO) insiders bought about 130k shares in July-August and another 130k shares in October, all at about $7.50. At Potbelly (PBPB) insiders bought 150k shares at about $4.00 in August. At One Hospitality (STKS) insiders bought 15k shares at $2.98 in November. Perhaps the largest insider buying, relative to the capitalization, was at Good Times Restaurants (GTIM) where insiders bought 65k shares at $1.50/sh in Aug-Sep and another 80k shares at $2.25-$2.50/sh in December.  As of February 8th, the first four are up 33%, 31%, 37% and 35%, respectively, and (GTIM) is up about 90%. History has shown that, while nobody knows the company better than the insiders, the timing can be suspect. That’s true, but not lately, and insider buying remains a good starting point for further research. 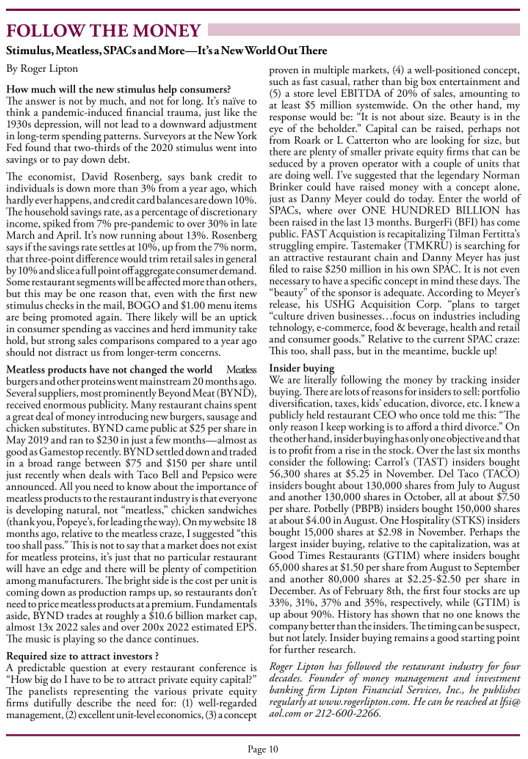