There are too many similarities to the 1970s to dismiss the current surge in prices as “transitory”, no matter what Fed Chairman, Jerome Powell, says. Something like $20 trillion has been created by worldwide Central Banks since 2009. Over the last ten years, consumer price inflation (until recently) was subdued because: while the Fed printed money (increasing the M-2 money supply by 25% in the last twelve months alone, at the same time they raised the capital and reserve requirements in banks, reducing the “velocity” of the new funds. Asset prices (stock, bonds, art, homes, etc.) have taken off, largely as a result of “TINA” (There Is No Alternative) because the Fed also suppressed interest rates. As restaurant operators know by now, however, operating costs are rising sharply and menu prices have begun to follow. The CPI is up over 5% in the last twelve months, and the (leading indicator) Producer Price Index (PPI) was reported last week at 8.3%, the highest since 2011. Inexorably rising labor costs have now been joined by higher commodity prices and higher supply chain expenses. Brilliant economists such as David Rosenberg (Rosenberg Research and Lacy Hunt (Housington Research) argue that the slowing post-Covid 19, now Delta Variant suppressed, economy, will control inflationary indications. However: expectations alone can encourage current spending and exacerbate shortages, and the Fed’s primary mission is to encourage inflation at 2% or more (perhaps much more). Let’s theoretically suppose: What if the Central Banks were to create $100 trillion of new currency, with no increase in available goods and services? Prices would be sure to go up, right? Well, $20 trillion didn’t do it over the last ten years but $100 trillion would. Somewhere between $20T and $100T is “ignition” and we suspect it is closer to the former.

Dutch Bros Inc. leads the way in terms of valuation and long term growth prospect. In every stock market cycle, a number of newly public restaurant chains present themselves. Within the last twelve months, BurgerFi (BFI)was purchased by a SPAC, and Tilman Fertitta’s hospitality and gaming empire is about to be acquired by FAST Acquisition (FST). Several other SPACs are searching for acquisitions, while Sweetgreen, Portillo’s and First Watch are preparing for IPOs, all at very high valuations by historical standards. Dutch Bros is apparently going to be first of these out of the gate. In preview: we consider Dutch Bros to have huge potential for long term growth, and a highly successful IPO will likely set the stage for the others (deserving or not). In preview: if there is one restaurant company that we would want to own at 37.5x trailing Adjusted EBITDA, Dutch Bros (BROS) would be it. An extensive discussion of BROS is available on our website (use the SEARCH function on our HOME PAGE) and the summary is: Serving hot and cold  espresso-based drinks, the proprietary Blue-Rebel energy drink and other beverages, with a corporate culture and store level experience that is instructive, the numbers are compelling: Growing from its Grant’s Pass, Oregon base, there are now (as of 6/30/21) 471 drive-thru (650-950 sq.ft.) shops in 11 states. The systemwide AUV was $1.7MM in calendar 2020.The Company has grown, systemwide, from 328 in 7 states @12/31/18 to 441, mostly company operated locations, in 9 states at 12/31/20 and 471 in 11 states at 6/30/21. Systemwide Same store sales, up for 14 years running, was up 2% in 2020 and was up 8.2% as of Jun’21. Company stores have generated a 29% shop-level EBITDA margin in calendar ’20 and six months of ’21. Adjusted corporate EBITDA was about $70M in calendar ’20 and $80M in the twelve months ending 6/30/21. The $3B valuation at the contemplated IPO price is 37.5x the trailing $80M of EBITDA but the latter number is growing so strongly that the fundamentals will catch up with the IPO valuation over the next couple of years. The IPO buyers will get a gift. The rest of us will have a decision to make. (As this is posted, BROS has doubled from the $23 IPO price, selling at about 80x the current EBITDA run rate. We expect there to be a more advantageous time to purchase the stock. The valuation is too far ahead of the fundamentals for our investment taste.)

OWN THE LAND, RESIST THE CONSENSUS

In recent years the restaurant industry mantra is to be “asset light”, franchise if possible, lease, rather than own, because you are in the restaurant, not the real estate, business. In days of yore, when leverage was less fashionable, there were some very successful restaurant companies that owned land. Back in 1980, it cost Chi-Chi’s $1.25M for land (owned in fee), building and equipment, and they did $2.5M per unit. Ryan’s Family Steakhouse came public in the early 1980s with an AUV of $1.3M, gross investment in LB & E of $650k. That’s called a fully capitalized 2:1 Sales/Investment ratio. A little company called McDonald’s has also done very well, owning land and receiving rent from franchisees. In New York City, the Reiss Brothers became very wealthy by owning the buildings in which their (generally poorly run, often changing) franchised restaurants were housed. With less financial leverage and an occupancy expense that equates to the cost of capital, it is much harder to get into financial trouble. There are currently a couple of publicly held companies that have begun to use real estate to build long term shareholder value. Ark Restaurants (ARKR), recently written up on our website, has purchased restaurants and underlying land under acquired locations, already paying off handsomely. RCI Hospitality Holdings (RICK) has productively developed real estate under their Bombshell sports bar concept. Why cannot a fast casual operator, looking for an end-cap strip location, find a dry cleaner, a fitness gym and a couple of other tenants, reducing (or eliminating) the remaining occupancy expense? Another business, to be sure, but a potentially productive use of inexpensive capital. 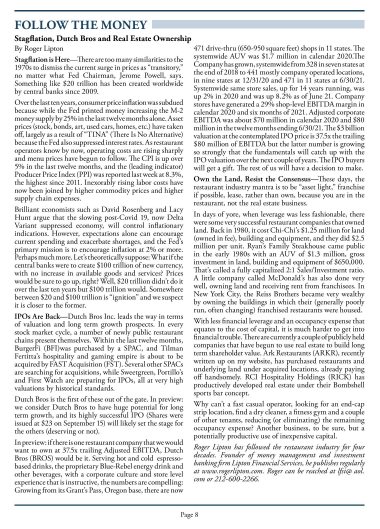