The Labor Crisis – and some intended consequences – The unprecedented labor crisis in the restaurant industry, more broadly within hospitality and retailing, is no secret. Since something like 20 million Americans are employed within these industries, the implications for our overall economy are significant.

The restaurant industry is now forced to pay anywhere from $12 to $16/hr. for starting crew members, and, even at that wage, it remains difficult to find candidates. Some companies are offering referral bonuses to existing employees, $50 to just show up at an interview and many other enticements. On a recent trip to South Carolina, I saw signs to this effect at almost every restaurant on the commercial strip. The most striking offer was at McDonald’s, willing to pay $28,000 as a starting wage to a trainee promising a management position within 90 days. The candidate might become a shift manager, rather than a general manager, but it seems a sign of clear desperation that a store owner will be required to hand over the keys to their $3M restaurant, for even a shift, after only 90 days of training.

The cause of the crisis unfortunately, as with most policy debates these days, comes down to a political divide. The left suggests that it is the fear of interacting with the public while Covid-19 is not yet eliminated, even $15/hr is barely a living wage, and some candidates still have to stay home with children that are not yet back in school. Conservatives suggest that enhanced unemployment benefits amount to more than a recruit would earn while working and “if you pay people to stay home, they will stay home”.

The enhanced unemployment benefits are slated to remain until September 6th, and it seems unlikely that the Biden administration will modify that. However, South Carolina and Montana announced their plan to withdraw from the Federal Program at the end of July and the US Chamber of Commerce announced its support of stopping the extra $300/week.

The Result – including some unintended consequences

BITCOIN (and its potentially fatal flaw) –  Bitcoin, and its recently highly publicized baby brother, Dogecoin, continue in the news. There were originally two major stated attractions of Bitcoin as the ultimate currency. It was (1) non-traceable by governmental authorities and (2) there could never by more than 21M coins issued. The first reason is now obsolete since its use is being “discouraged”, in a variety of ways, by many countries. Cryptocurrencies, after all, compete with the unbacked currencies issued by your friendly government. The US government says Bitcoin is taxable property and your 1040 tax return asks: “at any time during 2020, did you receive, sell, exchange, or otherwise acquire any financial interest in any virtual currency?” The second justification does not hold up because Bitcoin, the most prominent crypto currency, is steadily losing its dominance and there are nine thousand competitors. A year ago, the value of Bitcoin “mined” amounted to something like 75% of all cryptocurrencies, and an even higher percentage of transactions. Today, though the value of the Bitcoins issued amounts to a trillion dollars, the myriad competitors include Etherium (worth $458B), Etherium II ($458B), Binance Coin ($101B), Dogecoin ($64B), and Tether ($56B), together comprising an additional $1 trillion. It seems to us that it is just a question of time before Bitcoin gets diluted into relative oblivion.

Shake Shack – (receives our Financial Transaction of the Year Award) – The restaurant stocks are mostly at their highs, anticipating a full fundamental recovery from the pandemic driven challenges. Shake Shack (SHAK), one of the most admired fast casual chains, has continuously traded at a very high valuation since its IPO at $21.00 per share in 2015. Well run though it is, SHAK has been especially battered by Covid-19, since their locations are in urban locations, at destination malls and resorts, have had no drive-thrus, and their product doesn’t travel particularly well. SHAK declined from about $100/share in late ‘19 to a low of $30 in early ’20, then (after returning $10M of PPP funds) raised $136M from the sale of stock at about $40/share. It should be noted that their highest earnings were $0.72/share in 2019, so even the $30 low was 42x peak earnings and it will obviously be a while before that level is achieved again. The stock sale, at $40 was opportune but THE AWARD applies to the latest financing. In March, 2021, still reporting operating losses but with the stock at about $130, SHAK issued $250M of Convertible Senior Notes, due 2028, convertible at $170/share (236x peak historic earnings), with a ZERO PERCENT INTEREST rate. A score for SHAK, to be sure, now sitting on over $400M of cash and no (interest bearing) debt. Not so admirable for the institutional buyers who have now written a new book called “Reaching For Zero Percent Yield”. 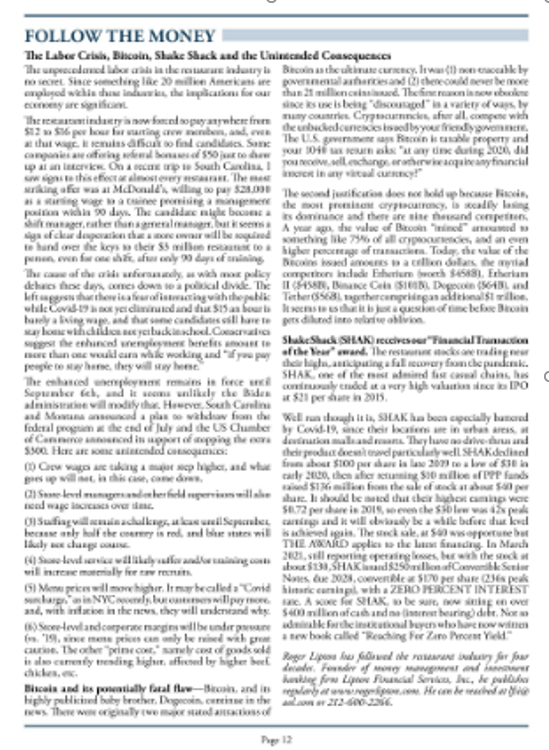