While admittedly there are a number of unknowns in terms of revenue trends and costs, we believe that the future will be more predictable than the past, to a large extent due to a now demonstrated productive evolution of the expansion strategy. Based on (1) continued focus on current highly productive restaurant properties (2) New restaurants to be purchased, rather than built from scratch, based on existing (expandable) cash flow, ideally combined with underlying real estate value (3) Geographical expansion largely in the rapidly growing southeastern US (4) Substantial long term potential from Ark’s involvement in THE Meadowlands, not so much a question of “if”, rather “when” within the next several years (5) Unusually high insider ownership with an obvious commitment to building long term shareholder value: We believe that Ark (ARKR) is unusually attractive with an Enterprise Value at about 4.5x current normalized EBITDA.

We wrote our initial report, at $19/share in April, which can be accessed through the SEARCH function on our Home Page. Since then, the reported results have improved dramatically, and the prospects are better than ever.

We believe Ark Restaurants (ARKR) is undervalued, largely due to:

We estimate that Ark is currently producing “normalized” annual EBITDA at a rate of approximately $14-16M annually. We believe that commodity costs will eventually revert back to normal levels, but wages may stay at a higher level due to increases in the minimum wage and the current labor shortage requiring higher pay to attract workers.

The company’s recent Q3 earnings release was much stronger than expected, producing $5.6M in adjusted EBITDA (including a $2M drag from lack of revenue in New York) in spite of lagging properties doing a total of $9M less in revenue. Along with other restaurant and retail companies, Ark has not has a “normal” quarter in well over a year.  While sales have been extremely strong in Las Vegas, Alabama and Florida, food and labor costs have risen sharply, negating some of the expected operating leverage. Commodity costs have risen for certain items  as well, and though menu prices can be adjusted over time, management is appropriately cautious in this regard.

The $5.6M of EBITDA just reported was within a generally strong season, though negatively impacted by NYC, in particular. While admittedly there are a lot of unknowns in terms of revenue trends and costs over a full year, especially considering the pandemic and the yet to be experienced seasonal and pandemic influence at the newly owned, highly productive Florida restaurants, we do believe using a simplified back of the envelop calculation indicates the company can produce at least $14-$16M in EBITDA on a more normalized basis. We believe that commodity costs will eventually revert back to normal levels, but wages will likely remain at a higher level due to increases in the minimum wage and the current labor shortage.

Some other assumptions in our model are: 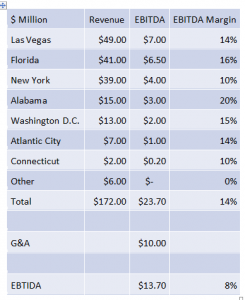 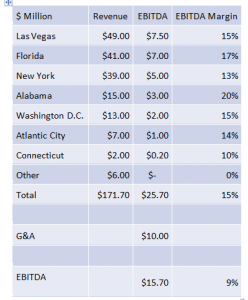 Using these assumptions, we feel that Ark can generate $14M-$16M in EBITDA depending on revenue growth and margins. The most significant upside to our estimates could come from additional acquisitions of restaurants, most likely in the southeastern US.  Downside to our estimates could come from the events business not returning as strongly as anticipated in New York City and Washington D.C. It should be noted that management estimated that New York City’s cash flow was about $2M less than normal in Q3 due to restrictions and lack of events and tourism. Admittedly, it could be early 2022 before complete normalization takes place.

An important renegotiation is pending of the leases at four restaurants in the New York-New York Hotel & Casino, due to expire in January 2023.  The Las Vegas segment generates about $50M in revenue (25% of total company revenue) and approximately of $7-$8M in EBITDA. We believe Ark pays at least $6M in rent in Las Vegas. Losing this lease would be a significant negative for the company, since it would obviously be difficult for the company to replace this lost revenue and cash flow in the short run. On the Q3 conference call, management indicated that negotiations on these leases is set to begin in early September. While relations with MGM over the years have been friendly, there has been a significant amount of turnover in management at the company and Ark will be negotiating with nearly an entirely new team (one key person remains). We also believe that as part of any lease renewal, Ark may have to spend on the order of $5M to refresh some of the properties.

Our current conclusion is that, in all probability, the leases will be renewed. The company has several factors in its favor, such as, an exemption from using a unionized labor force and successfully operating the current restaurants since 1997. Because union pay and benefits are higher, a new lessor would be less willing to pay percentage of revenue as rent and therefore, MGM would receive less rent than continuing leasing to Ark. CEO Weinstein has proven to be a very effective negotiator, as demonstrated time and again over the decades.

The following commentary from management took place on the recent conference call, particularly in response to a question about the desirability of taking the company private:

“The Meadowlands to us is a huge positive. First of all, we’re probably the largest sports betting facility on the East Coast.

“But the geometry of that investment that we made 5 years ago could be really significant to our current shareholders, some of whom I know have their eye on that and are comfortable owning our stock despite the fact that it doesn’t reflect the current operations.

“And for the first time, I think, this year, Meadowlands will make its first distribution. That will not be an insignificant number to Ark that we’ll be allowed to report. (Note: we expect only cash equal to the tax liability will be distributed.)

“But more importantly, as New York state starts to play out with the downstate casino licenses, which there’s been a moratorium on because the guys they’ve built upstate had to deal with Coumo essentially that nothing will happen downstate until 2023, which will give the upstate guys time to recapture some of their capital investments. And there’s a lot of lobbying pressure going on to try to get those downstate casinos issued prior to 2023.

“But even if we wait until 2023, once those downstate licenses are issued, we don’t see any way in which New Jersey doesn’t react and make Meadowlands a casino.

“So to me, I think our current shareholders should have the advantage of that.”

We view visibility of the year-end Meadowlands distribution as an important first step in giving shareholders some insight into the current cash flow of the partnership. Management has not indicated a dollar range that the distribution could be, but we believe it could be several millions of dollars. On the Q4 2019 conference call, Mr. Weinstein stated that the Meadowlands partnership was on pace to generate around $8M-$9M in EBITDA. ARKR’s share would have been around $800K-$900K. The amount was not distributed. In 2019, the Meadowlands generated about $120M in gross gaming revenue. According to the New Jersey Division of Gaming Enforcement division, the Meadowlands has generated over $245M in gaming revenue through July of 2021. With football betting season just about to begin, the Meadowlands could generate over $500M in gaming revenue or 4X 2019 revenues. However, the only distribution in 2021 would be an amount to cover any K-1 cash tax liabilities Ark would have. But investors can see how strong the underlying business is at the Meadowlands. The company has recently received a payment on the $1.8M receivable from the Meadowlands as well.

In January the company had $11M in cash and $46M in debt (including $14M in PPP loans). Included in the debt figure was a $9.7M revolver balance coming due in May. Liquidity has improved substantially since then. On June 27, 2020 the company had a cash balance of $20.7M after receiving $15M in PPP money. At the end of Q3, the company reported $18M in cash, the second highest cash balance in at least a decade. The $9.7M revolver maturity was extended to June 2025. The company is now required to pay $500K a quarter and a balloon payment at maturity. Total debt service is approximately $4.8M a year. Excluding any cash flow between now and the end of the year, the company could have over $22M in cash on the balance sheet and only $30M in debt.

Without taking into account the potential value created by the company’s ownership in the Meadowlands, the company is trading at a significant discount to its peers.

As we discussed above, we think the company can generate between $14M and $16M in EBITDA on a normalized basis. If we assume the company receives the expected $4M in tax refunds (no free cash flow over the next 6 months) and $5M in PPP loans are forgiven as expected, the company’s net debt should be around $8M. This would bring the total enterprise value to about $57M. As a reminder, this valuation does not include the $5.1M investment in the Meadowlands that is generating zero cash flow, any future annual distributions from the Meadowlands, the approval of a casino at the Meadowlands, the value of Ark’s concession at the Meadowlands or the monetization of land under certain restaurant properties.

Based on our estimate of normalized annual results, the EV/EBITDA valuation of Ark is approximately 4.5X, very low for a restaurant company with a strong balance sheet, demonstrated cash flow generation and predictable growth opportunities. For example, J. Alexander’s (JAX) a company that we view as a peer, is currently being taken private at an implied EV/EBITDA of 8.7X. The range of multiples used in the fairness opinion ranged from 7X-13X. This acquisition multiple implies Ark could be worth nearly $30 per share as a standalone restaurant company. This also means investors are getting a free call option on any value creation the company could achieve on the Meadowlands being granted a casino license, as well as the opportunity to monetize real estate under certain restaurants.

Without the Meadowlands, ARKR could be worth approximately double the current price. A casino at the Meadowlands could generate another $10-$20 per share in value depending on how the company’s portion of the cash obligation for the casino and restaurants is structured.

While the company is not immune to the macro factors that are impacting all restaurant companies to various degrees, we believe there is no other publicly traded restaurant stock that provides investors so many unique opportunities to create value. 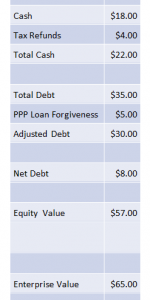