as printed by the widely followed Restaurant Finance Monitor on June 15, 2021

YOU CAN EARN INTEREST ON YOUR BITCOIN – You will be hearing more about the opportunity to earn interest on your holdings of bitcoin or other cryptocurrencies. How can this be, since bitcoin cannot be possessed physically? This is a brave new world. Bitcoin and many of the other (ten thousand!) cryptocurrencies are traded on a variety of exchanges. Some of those exchanges are allowing traders to “short” cryptocurrencies, just as investors have been allowed to short stocks and bonds for ages. That means the exchange has to arrange a “borrow”, somehow segregating the asset from the owner’s account, allowing for “delivery” to whomever is buying it from the short seller. Just as when scarce or “hard to borrow” stocks are lent by custodians such as Fidelity, the short seller pays a fee to the custodian that can range from a couple of percent to upwards of 50% annually and 40-50% of that is shared with the true owner. The interest rate on cryptos varies widely, depending on the exchange and the coin, and can sometimes provide double digit yields to the owner. However, this attractive return is subject to the safety of the custodian such as Coinbase Global (COIN), the largest of many exchanges for cryptocurrencies.  All of this negates one of the original advantages of bitcoin and the other cryptos, which was to prevent access by third party agencies, including governmental authorities.  COIN is “regulated”, but by whom, and to what effect? The bottom line is that “third party” or “counter party” risk adds to the price risk of the crypto. How much do you really know about the exchange (depository) you have chosen, and what recourse do you have in the event of default? For what it’s worth, as this is written, Coinbase does not offer an interest rate for bitcoin owners, but the BlockFi exchange is paying 5%, Nexo is paying 6%, and Celsius is paying 3.5%, to name just a few. Be careful out there!

KRISPY KREME IS BACK, having filed IPO documents to raise an indicated $100M. Founded in 1937, Krispy Kreme came public in 2000 and was a hot stock for several years. However, very rapid expansion undermined the novelty effect, the Atkins diet craze may have hurt sales, the brand image was undermined by distribution points such as C-stores, and franchisees were further disillusioned by the profit the franchisor made on the distribution of product mix and donut making equipment. (Shades of TCBY!) A stabilization and building effort began in 2005, resulting in JAB Holding taking the Company private in 2016, for $1.35B. Fast forward: the rumored Enterprise Value of the coming IPO is $4B, including $1.2B of debt, $350M of that owed to JAB. The numbers: From 2016 to 2020, Net Revenue increased from $557M to $1.122B (a CAGR of 19.1%), but a large portion of that revenue growth was generated from the buyback (for $465M) of franchised stores. Over the same period, Global Points of Access increased from 5,720 to 8,275. The GAAP loss before taxes increased from $18M in 2018 to$21M in 2019 to $52M in 2020 but Q1’21 showed a GAAP pretax profit of $307k compared to a $12M loss in ’20. Adjusted EBITDA looked (predictably) higher: $128M in 2018, $151M in 2019, $153M in 2020, and $48M in Q1’21, up from $38M. The Global Points of Access grew further in Q1’21, to 9,077, up 9.6% in just three months. As presented early in the 200 page prospectus: “Krispy Kreme doughnuts are ….universally recognized for its melt-in-your-mouth experience. One differentiating aspect …is our Theater Shops with our ‘Hot Now’ light….the most awesome doughnut experience imaginable….we are an omni-channel business, via (1) our Hot Light Theater and Fresh Shops (2) delivered fresh daily through high-traffic grocery and convenience stores (3) e-Commerce and delivery and (4) our new line of packaged sweet treats offered through grocery, mass merchandise and convenience retail locations. In terms of valuation: The rumored $4B valuation, at 25x the Adjusted EBITDA current run rate of about $160M, seems fully valued, to put it charitably, and the outlook is not risk free. When the last IPO took place, in 2000, customers were lined up for blocks around a newly opened location. Not so much today.

THE HOSPITALITY QUOTIENT – “Culture” is an overworked term in the hospitality business. Hard as it is to define, Danny Meyer and Howard Schultz have demonstrated how far a great culture can take you. My wife and daughter think I’m getting a little (or a lot) eccentric. Sometimes, after a service person responds to my thanks with a “no problem” I suggest that something like “my pleasure” is a lot more hospitable, personal, even charming. I feel like I’m doing them a favor, mentoring them if you like, and it costs me nothing. Most often they seem to appreciate it, and respond on my next visit, with “my pleasure” and a smile. Which leads me to my recent visit to Starbucks. The expeditor at the pickup counter, after I thanked him, responded with “my pleasure”. When I complimented him, he said that it was natural for him because he also works at Chick Fil A. So: the $7M per copy that Chic Fil A is doing, in a six day week, is more than double that of McDonald’s, which does a lot more than Burger King or Wendy’s. Maybe there really is something about building, among other things, a warm salutation into the training process. There’s nothing obnoxious about “no problem” but “My Pleasure”, “Always Nice to See You”, “You’re Very Welcome”, “Any Time”, “Come See US Again”, or down south “Y’all Come See Us Again, Y’Hear?” could go a long way. The above does not happen by accident. 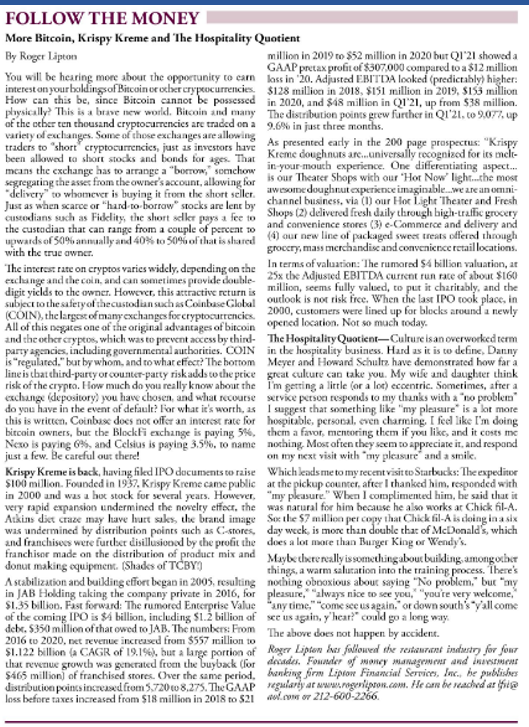