Pictures can more efficiently provide a summary of what has been going on from a fiscal/monetary standpoint over many years, leading us to a considered opinion of what the financial world will look like in the future.

The chart just below shows the current 30 year yields in various countries around the world. It is an axiom that the bond market supposedly prices in some sort of a “real” yield on top of allowing for inflation.  With the US 30 year yielding close to an all time record low of 1.44%, hardly anybody expects inflation to be zero over the next 30 years, which would provide a 1.44% “real yield”. It is a better assumption that the pricing represents expectations of a weak economy as well as the US Fed’s intention to increasingly support the long end of the yield curve.  The 30 year is “bid” to represent a safe haven as well as a short term trade, rather than a 30 year investment. 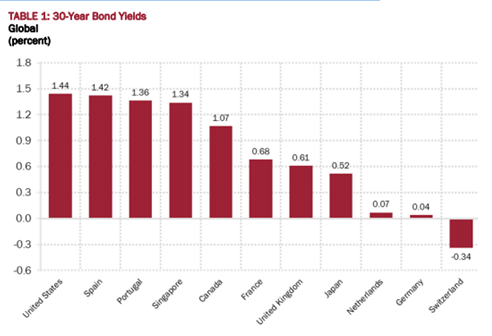 We can also assume that interest rates will stay very low, if the US Fed has anything to say about it (and so far they have), because it is only the ultra low rates that allow the US to carry the sharply increasing debt load.  The charts below show the ongoing annual budget deficits as well as the increase in the Federal Reserve’s balance sheet, whereby the Fed has been financing an increasing amount of the US operating deficit. Lest you think that this will all change once the economy gets going, and the operating surplus will reduce the cumulative debtt: Since 1981 there have been a grand total of four surplus years, the last three under Bill Clinton and the first under GW Bush, before the two wars started. The total surplus in those four years was about $760B, so you can judge for yourself how much of a dent  a stronger economy will make in the current $26 trillion growing debt federal debt burden. 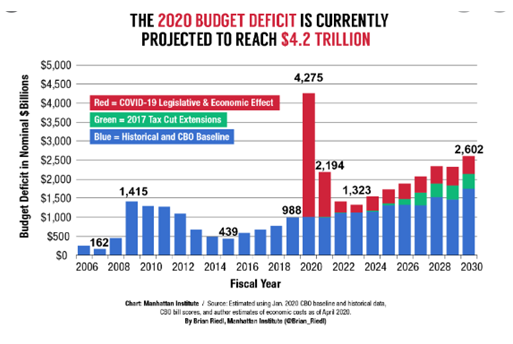 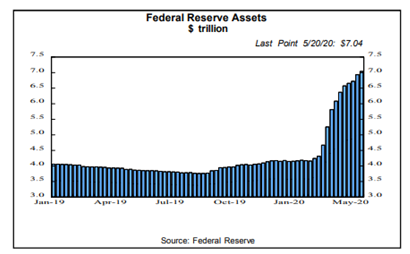 You have now seen how the bond market is predicting slower growth, at least in part due to the growing debt burden (around the world), which has been financed largely by worldwide Central Banks.

The last chart, below, shows the result, a  steady decline in GDP growth in almost every post-recession expansion since 1981. The most recent ten years is fresh in our mind. A business friendly  President passed one of the largest tax reductions in history, allowed for repatriation of almost one trillion dollars that had been frozen overseas, reduced the legislative burden on business and encouraged the Federal Reserve Bank to print trillions of dollars and keep interest rates near zero. The result was a grand total of 2.3% real annual GDP Growth over the last ten years, perhaps 0.1% to 0.2% more in the last three years under President Trump than under President Obama. This can charitably be described as a minimal “marginal return on investment”. 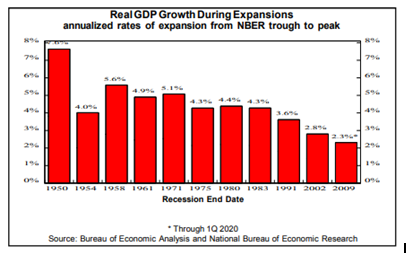 The coronavirus pandemic will be in the rear view mirror at some point in the next six to twelve months. The trends as described above will not. Rates will still be low, as signaled by Jerome Powell just recently, through 2022. This is because (1) the economy needs the support and (2) the US budget cannot afford higher rates on $26 trillion of growing debt. The annual deficits and cumulative debt will continue to step up by record amounts because that is essentially baked in the cake at this point. Just yesterday Fed Chairman, Jay Powell, reiterated the intention to invest a trillion dollars in all kinds of corporate bonds and ETFs. Also under active discussion is a trillion dollar infrastructure program.

Almost all observers, on all sides of the economic and political and social argument , agree that the recent magnitude of fiscal/monetary support has been justified to survive the healthcare crisis. The most realistic commentators point out the long term dangers, saying “we will worry about that later”. Our discussion is designed to show what “later” looks like and why.

As a result of the domestic debt burden, amplified by similar trends in every major worldwide trading nation, our expectation is that, after the sequential improvement from depression level economic activity, average real GDP growth will be no better, most likely materially worse, than the meager 2.3% average real GDP growth of the last ten years.

We fully expect that gold bullion will outperform equities in the next ten years, just as it in each of the last two decades. The bond market has outperformed both, as the entire yield curve was repriced downward, but that is less likely, from current levels, in the future.  Gold mining stocks, while higher,  have substantially lagged the price of gold bullion over the last ten years and there are many reasons to think that the gold miners will be the best performers  of all. They are, after all, custodians, in their underground vaults, custodians  of the “real money”.