The world’s greatest restaurant franchising company, McDonald’s, announced a modification of their partnership structure with franchisees.  As of January 1st, they are ending a $300/month/store subsidy related to Happy Meals. They will also require franchisees to  jointly fund the tuition program, instead of corporate paying 100% (the amount of extra expense has not been disclosed). Lastly, for the moment, they are requiring operators to “pay as you go” for technology investment, resulting in a “temporary” expense of $423/per month per store starting in March. Franchisees are expressing their displeasure.

It should be noted that the franchise Agreement  calls for a 4% royalty, a 4% minimum advertising requirement, and over twenty small fees (from $74/yr./store to $1,100 per year/store) which amount to about $10,000/store/yr. Many franchisees also pay McDonald’s rent, which has been described as a “minimum vs 8.5% of sales”. The initial franchise fee is $45,000 and franchisees must be prepared to invest about 40% of the total cost of the restaurant, and that total investment ranges from $1.008M to $2.214M, according to the Franchise Disclosure Documents. The bottom line is that the average franchisee nets about $150k per year, which would be about 9-10% return on the average investment. It is unclear whether that return is in addition to the operator’s salary. In either case, franchisees, while not generating a huge return on the dollars invested,  are making a living, and earning it.

You can see why $723/month, as described above, about $9,000/store/year is a noticeable hit on an average profit of $150,000. All of this is in the context of the unprecedented challenges that the QSR industry has had to cope with. While McDonald’s has adjusted to the pandemic-related problems better than most, it is unclear whether profit/store is higher or lower than a year ago.

The above structure is typical within the restaurant franchising industry: An initial franchise fee (in the tens of thousands of dollars) plus an ongoing royalty of 4-5% of sales, plus advertising contributions of 2-4% plus a variety of small (but material in total) additional fees. 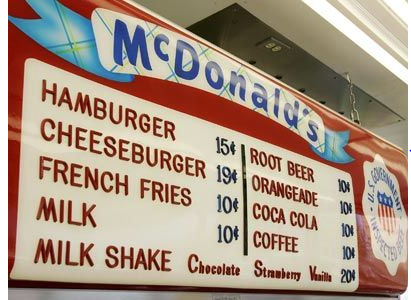 Ray Kroc started selling McDonald’s franchises in the 1950s. The upfront fee was $750 and the ongoing royalty was 1.9% of sales. By 1963 there were 460 stores in 42 states, the upfront fee had been increased to $12,000 and the royalty was 2.2%. In some cases, McDonald’s would build the store and rent to the franchisee. Even adjusting for inflation, the restaurant franchising industry has come a long, long way in the last sixty years.

We wrote, on March 11, 2019, the following article, which applies even more so today:

Almost everybody has noticed that there is an increasing strain between franchisees and their franchisors.  It is no accident that new franchisee associations are being formed and existing organizations are getting more militant. There are many intangible reasons, as too many franchisors do not treat their “z’s” as partners. We have written many times that the “asset light”, “free cash flow” model is not reflecting the necessary investments in the system to keep franchisees as profitable as possible. Many franchisees are especially bothered by the fact that their franchisors are spending hundreds of millions, sometimes billions, of dollars buying back stock and making acquisitions, while leaving the franchised operators without the necessary new product development, technology upgrades, marketing initiatives, etc.etc.

With all of that in mind, the bottom line is the bottom line. Too many franchisees are suffering financially, under more pressure than ever. The typical franchise royalty is 5%, give or take a point, plus 2%, as an advertising contribution. There are often additional charges, not all that material in and of themselves, but adding to an already large burden. Let’s say the franchisee is fortunate enough to be making 17-18% store level EBITDA (and Depreciation is not free cash in the long run).  Rebating 7 points out of 17 or 18 points starts to feel like a pretty big load, and there is still local G&A to be carried. Even if store level EBITDA, before royalties, is in the low  twenties, 7 points gets to be a bother.  Additionally: many franchisees, Dunkin’ Donuts and Burger King and Jack in the Box are just a few examples of mature systems where decent money is still being made at the store level because the store leases were signed ten or fifteen years ago, so occupancy expenses are lower than today’s economics would allow. That’s, of course, why so few new units are being built by many mature franchised systems, especially in the USA. Today’s economics do not allow it.

At the same time, there are no material expenses that are lower, as a percentage of sales, certainly not occupancy expenses or labor, and food costs are unpredictable commodities. The biggest single negative trend, that nobody would debate, is the immense competition that has become commonplace. Even in today’s over-stored situation, there are more new stores being built, within chains, than closing.  This competitive pressure has also created the need for far more support from the franchisor, if the increasingly critical public is to be satisfied and the franchisee partner is to succeed.  Over the last fifty years, as the franchisor should be providing more support and burdening the franchisee less, the trend has been just the reverse.

This specific suggestion will not be adopted by existing large chains, because it would be such an obvious reduction of the current royalty stream. However, well established franchisors could, and should, absorb more of the additional systemwide needs, such as technology upgrades. “Mid-stage” franchising companies could put some part of the following suggestions in place.

If I were running an early stage franchising company, I would put in place a sliding scale royalty system, charging 2.5-3.0% at a modest sales level, higher if the franchisee does better. Give them a little room to make money if the store doesn’t do quite as well as everybody hopes. If the store clicks, everybody is happy and 4-5% on the higher sales won’t seem like such a burden. For my multi-unit franchisees,  I would charge lower up front fees for development of 2nd, 3rd and additional stores, and this is sometimes already being done (whether admitting it to Wall Street or not). This is logical and appropriate, because less franchisor support is required as a franchisee builds local infrastructure.

It seems likely that a young franchising company adopting this strategy would have a huge competitive edge and the total royalty stream is likely to build more rapidly using this progressive approach.  Profitable franchisees, and a more appropriate sharing of store level profits in today’s economic reality, make for a successful system in the long run.