FAST Acquisition Corp (FST), about to merge with Fertitta Entertainment, Inc (FEI). filed preliminary proxy material yesterday. Our previous articles describing this relatively large transaction within the hospitality business can be accessed by way of the SEARCH function on our Home Page.

The size, alone, of this transaction provides an unusually attractive situation. Starting with the “acquisition target”, the roughly 20% dilution of the target’s equity, normally going to underwriters and sponsors of any SPAC, will be more like only 2% in this case. This is because a $6-7B Enterprise Value, once the deal is consummated, dwarfs the $250M originally raised. The very large amount of equity to be issued to the target and the private equity (PIPE) participants, taking place close to the price that the public has paid, dilutes the “promotional” shares very materially. This results (by our reckoning) in a much “fairer” result for all and the public “stakeholders” have a better opportunity for profit. In essence, the fundamentals of the situation don’t have to overcome the normal magnitude of dilution from sponsors and underwriters. Down the road, of course, after the deal is consummated late in ’21 or early ’22, the fundamentals will determine the outcome for all.

SO….WHAT ABOUT THE FUNDAMENTALS?

Recall, that in our article: “The Room Where it Happened”, we described how Tilman Fertitta sweetened the deal from the original terms, no doubt to encourage approval by institutional investors. In early August Tilman had indicated that the enlarged Company was generating about $270-275M of pro forma EBITDA in Q2’21, annualizing at about $800M as of mid’21, and this was a lot better tan the $648M of Adjusted EBITDA that had earlier been forecast for calendar ’22. We quoted sources who speculated back in January that Fertitta’s hospitality empire was generating a trailing twelve month EBITDA of about $400M, so that had obviously improved by July to suggest $800M annualized, seriously aided by the newly included restaurants.

We will review the several hundred pages (as you can imagine) in the preliminary Proxy when we can, but for the moment:

Adjusted EBITDA of Fertitta Entertainment, Inc.(FEI) in calendar ’19 was $513M, so that’s the base to build upon.

However: The Company is once again guiding to $648M of Adjusted EBITDA in 2022, which assumes a 13% decline in same store sales in ’22 vs. ’19 and 390 bp of margin improvement. This number excludes the contribution from new restaurants expected to open in ’22. On the positive side, the Enterprise Value, at $6.0B, has become about 9.25x the $648M of ’22 EBITDA, helped by the $750M value of the 46% of DraftKings stock to be exchanged for FEI’s ownership of GNOG.

The FST/FEI combination is clearly expecting major margin improvement in ’22, already happening in ’21. The question is: SALES? Either (1) management of the combined Company is reflecting their concern about renewed weakness in the hospitality business, because Fertitta has publicly stated (on TV at least) that business has recently been strong or (2) management is choosing to take an ultra-conservative stance. After all, with the deal  already sweetened with additional restaurants from Fertitta, and the balance sheet to be improved by the receipt of DraftKings stock (in payment for FEI’s GNOG), the Enterprise Value as a multiple of next twelve month’s Adjusted EBITDA will be enticing enough. Whichever way the general economy goes,  relative to other publicly held hospitality companies, FEI has more than likely underpromised and could well overdeliver. (UPOD).

We will report further on this dynamic situation over time. 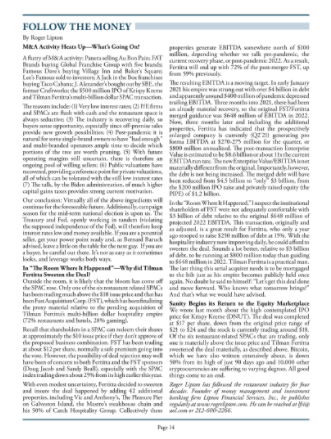 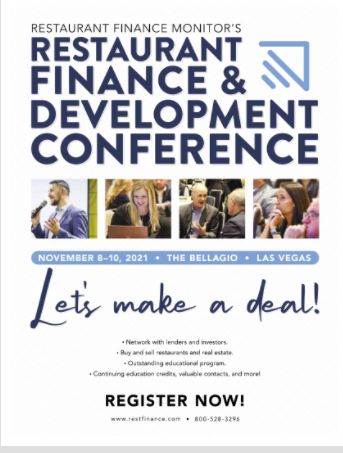