SEMI-MONTHLY FISCAL/MONETARY REPORT – THE GOLDEN RULE, “HE WHO HAS THE GOLD MAKES THE RULES”

There is an increasing amount of discussion about the prospect for government issued digital currencies, and China has already declared this possibility, even within the next year or so. Less currently discussed,  but foremost in the mind of many monetary analysts, is the possibility that China could somehow back a digital Yuan with gold. Since China’s economy, military strength and technological prowess dwarf’s that of Russia, logic dictates that China is the adversary with which we should be most concerned. With that in mind, China has already broadcast their long term desire to have their Yuan replace, or at least join, the US Dollar as a reserve currency. It would be a large step in that direction if a digital Yuan were, explicitly or implicitly, backed by China’s gold reserves. Here are the facts, after just a few definitions: 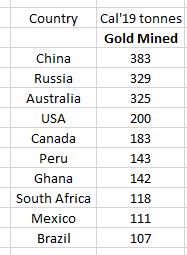 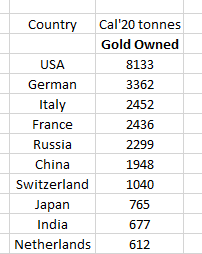 However…… it is well known by analysts that track the physical movement of gold bullion that no gold production leaves China. It is all absorbed by various government agency. Therefore, China’s gold production from 2009-2015, was at least 300 tonnes per year or 1800 tonnes, three times the 604 tonnes reported. Similarly, from 2015 to 2019, production was at least 1200 tonnes, about four times that reported. Considering that (1) Chinese is notorious for their secrecy (2) they have clearly stated their long term monetary objectives (3) the Shanghei Gold Exchange is by far the largest physical gold marketplace in the world (4) other Chinese governmental agencies have been reported as gold purchasers, it is not hard to conclude that combined Chinese governmental agencies own a great deal more than the 1948 tonnes the PBOC reportedly control. It is easy to surmise that the Chinese may already own more than the 8133 tonnes of the largest reported owner, the USA, possibly a great deal more. If we were to guess, based on “anecdotal” reporting from a variety of sources and the numbers provided above, we suggest the more accurate holdings are upwards of 15,000 tonnes.

Should the Chinese establish a digital currency, backed in some form by gold, or even announce how much higher their gold holdings are than previously indicated, the price of gold would likely appreciate very substantially. It’s been said that “good money chases out bad” so capital would rapidly flow eastward. Just as when Richard Nixon closed the gold window in 1971, the other most tangible result in the US would be the loss of purchasing power by the US Dollar.

As my friend, and brilliant monetary strategist, Luke Gromen, likes to say:

P.S. It is interesting that Russia, though far smaller and less powerful than China, is the second largest producer, fifth largest stated owner, and most rapid reported accumulator of gold bullion. Russia, relative to the size of their economy and paper currency outstanding, has the highest physical gold holding and is therefore in the best theoretical position to back their currency and/or debt with gold.  Just as with China, nothing would please the Russian authorities more than to replace the US Dollar as the preeminent trading currency.