ROGER’S MONTHLY COLUMN FOR THE RESTAURANT FINANCE MONITOR – THE RUBBER MEETS THE ROAD AT THE FED, TIME TO REFRESH CASH ON CASH ANALYSIS, THE VALUATION OF BLACK RIFLE COFFEE

The Rubber Meets the Road at the Federal Reserve – In addition to raising rates steadily over the next twelve to eighteen months, to perhaps 2.5-3.0%, the latest indication is that they will also shrink the Fed balance sheet from the current all time high of $9 trillion. Recall that this number was approximately $1 trillion in 2007, so a cool $8 trillion has been printed out of thin year, to purchase fixed income securities of all stripes, US treasury securities and mortgage-backed securities in particular. The Fed’s purchase of trillions of dollars of US Treasuries has financed something like half of the government’s operating deficit, and kept interest rates from rising in the process. Recall that in May, 2013, with Fed Assets at “only” $3.4 trillion, up $500 billion in the prior six months, Fed Chair Ben Bernanke announced a plan to start tapering asset purchases. In short order, a “taper tantrum” in the bond market took the yield on 10 yr. treasuries from around 2% in May to around 3% in December and the Fed backed off.  Also recall that in Mid ’18, when the Fed assets were “only” about $4.4 trillion, newly installed Fed Chair Jerome Powell established an “automatic” reduction of $50 billion per month. This lasted about eight months, reducing assets only modestly to about $3.7 trillion before the stock market sank by about 18%, the politicians screamed “do something” and the supposedly independent Fed once again backed off. So the trillion dollar balance sheet in 2007 grew to $3.4 trillion by 2013, never coming down in spite of Bernanke’s originally worthwhile intentions. Five years later, with the balance sheet at $4.4 trillion, up a third in five years and a quadruple over ten, the Fed’s courage waned after less than a 15% reduction. Presently, having capped off the largest financial experiment in the history of the planet, with interest rates suppressed close to zero for ten years by the printing of about $8 trillion of Made in the USA “cryptocurrencies”. Currently the Fed is planning an immediate $50 billion/month reduction of their balance sheet, at the same time that interest rates are allowed to “normalize”. It seems relevant that until two weeks ago they were still printing $40B per month, with a slight increase even last week. One might ask why, if the plan was to start reducing within a matter of months, they would continue to print right up to the infection point. In any event, we’ll see how long the reversal from $40B of monthly “accommodation” to $95B of contraction, along with already rising interest rates, is tolerated by the capital markets. We suspect that Federal Reserve chairman, Jerome Powell, will be strongly encouraged to back off. There’s plenty of time after November 8th, and no Fed Chairman since Paul Volcker has been willing to take away the “punch bowl”.

Analysts should refresh cash on (much more cash) return analysis. Store level performance is often measured by calculation of store level Cash-on-Cash Returns. Broader parameters include ROI, Return on Equity and similar performance measures that are not only dependent on AUVs, store level margins but, below the store level, corporate G&A. The denominator, the cash investment per operating unit, is a predictable focus when the company raises capital, public or private, but tends to get overlooked later because analysts seem to avoid getting so “granular” later on. Since most of us realize that construction costs are rising materially, and we don’t mind digging a bit, we compared disclosures in 2021 10-Ks to those in 2019 to see what construction costs are doing. Space does not allow a complete listing but McDonald’s spent $4.4M in ’21 vs. $4.0M in ’19. Chuy’s spent an average of $3.5M vs.$3.0M. Cracker Barrel spent $4.9M vs. $4.7M. Cheesecake Factory targets $1,000 per square foot in 2021 vs. an average of $950/ft in 2019.  Texas Roadhouse spent $5.7M vs. $5.5M and $7.4M vs. $6.7M for their Roadhouses and Bubba’s, respectively. We suggested here last month that BJ’s and Shake Shack, based on their Q4’21 vs. Q4’19 AUVs, were a “work in progress. Exacerbating the situations, BJ’s “currently targets” a cost of $6.0M on average vs. an average cost of $5.0M in ’19, up 20%. Shake Shack averaged $2.4M ($2.0M net of tenant allowances) in ’21, vs. $2.2M ($1.9M net of TA) in ’19. It is not a good combination when AUVs are challenged, traffic is down, store operating costs are up and the cost of the facility is rising materially. As if the above numbers are not problematic enough, it does not promise to get any easier in ’22.

Black Rifle Coffee Company (BRCC), after running from $12 to $30 over the last two months, values BRCC at over $6 Billion, which is over FOUR HUNDRED TIMES PROJECTED ’23 ADJUSTED EBITDA. Two months ago, we opined that BRCC, at $12.00/per share was “not cheap, but the good ones rarely are”. The Investor Presentation compared the multiple of TTM sales to that of eight high growth F&B companies (Beyond Meat, Dutch Bros, Oatly, etc.) and five DTC lifestyle brands (Lululemon, Warby Parker, etc.) and Black Rifle’s valuation, at $12. was generally inline. However, in the last sixty days, the comp stock prices are down 22.2% and 10.1% respectively, while BRCC is up about 150%. Part of the price rise is likely due to the somewhat limited share float, with perhaps 70% held by the sponsors, institutions and the earnout by the founders. A recent S-1 registration filing in conjunction with the exercise of all the warrants will roughly double the float when effective, so there will need to be a great deal of demand to absorb $1.5-2.0B of potential supply. Black Rifle is a good company, but now ridiculously priced. 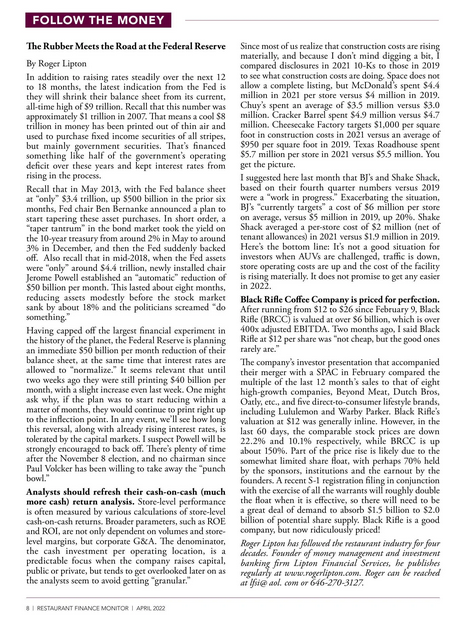