Twenty five publicly held restaurant companies presented this past week at the annual ICR Investor conference in Orlando. We provide below our summary of sales and profit margin expectations, as well as some observations regarding long term expansion in a normalizing interest rate environment, including some observations relative to Shake Shack.

Sales trends in Q4’22 were firm, both in full service and QSR segments, but the gains were, in almost all cases, price driven, so positive traffic comps were hard to come by. Reference was made to the storm early in December and widespread brutal cold just before Christmas, as well as firm sales a year ago until the Variant hit at the very end of December. We interpret this not as a setup for disappointing sales in December or Q4, but pointing out a reality relative to December trends which might have softened a bit. Going forward, the comps get easier in Q1’23 against Omicron in ’22, and most companies were cautiously optimistic that comps will remain positive as ‘23 unfolds, but traffic gains will still be hard to come by. It is worth noting that dine-in traffic is down materially more than overall traffic, since off-premise is a lot higher than it used to be.

Expectations for prime costs, labor & cost of goods, are: wages to be up low to mid-single digits in ’23, less of an increase than in ’22, and cost of goods will be volatile but hopefully up less than in ’22. There will therefore by margin pressure from those large items. The problem is that pricing adjustments continue to be necessary, in an effort to recoup pre-Covid profit margins. Nobody wanted to lead the way with price increases, and might have been hopeful that inflation would in fact be transitory (though we warned you), but it is clear now that wages are up and going higher, as well as utilities, the cost of repairs and maintenance, insurance, waste disposal, etc. Hardly any management teams are guiding to materially higher store level or corporate profit margins, appropriately cautious in an unpredictable economy.

It is worth commenting about the cost of new construction, as well as ongoing difficulty to get timely delivery of materials and equipment. This, obviously, lowers the return on capital, unless the new locations do proportionately more volume, so virtually every management team is increasingly selective in terms of expansion.

Shake Shack is an interesting long term case study of rapid expansion, accompanied by decade long minimal interest rates, which are now beginning to normalize. Founder, Danny Meyer and CEO, Randy Garutti and their team have created an admirable corporate culture and continue to be the fastest growing publicly held company operated chain. Though their AUVs continue to moderate, as management has predicted, now in the mid $3M range, down from much higher levels when they came public with NYC stores doing $7M a copy. They are now spending an average of $2.4M on new stores, up about 15% in the last 2-3 years. The ROI on new stores is therefore, obviously a lot less than it used to be. The good news is that Shake Shack has had access to very inexpensive capital, both equity and debt. We called their March 2021 convertible bond issue the “Deal of the Year”, when, with SHAK trading around $120/share (now at $50) they raised $250M, convertible at $170/share, at ZERO PERCENT interest. They still have that cash in the bank today, with a total of $336M of cash and marketable securities, so their balance sheet is strong, with adequate long-term flexibility.

Garutti talks about the huge Total Addressable Market for new stores and enthusiastically describes a long list of brand building initiatives, from drive-thrus to new products, to ordering kiosks, new venues, personalized digital service, etc. At the same time, he and CFO, Katie Fogertey, know well that the $250M comes due in 2028, time flies, and all financings from here will be more expensive than in the past.  Stepping back from the details, opening 40 new company operated stores in ’23 will be a lot of work but is “only” about 15% against the current company operated base. Unit growth was 41% in’17, 38% in ’18, 31% in ’19, predictably difficult to closely control. ’20 was a “fire drill” during Covid, with suppressed 12% unit growth and ’21 was a catch up year with 20% unit growth. ’22 was more normal, with 16% domestic company unit growth and ’23 will be about the same. Putting the last ten years in context, the inefficiencies inherent in the earlier aggressive growth strategy were affordable because capital was very inexpensive. The good news is that the current company operated unit growth rate should be affordable, sustainable and increasingly efficient over time. At the same time, the asset light licensing effort has a great deal of potential. The turbulent financial markets promise to provide new challenges, but SHAK management is demonstrably very smart and dedicated, supported by a strong balance sheet, and should be able to productively adjust. (The valuation of SHAK we will discuss another day). 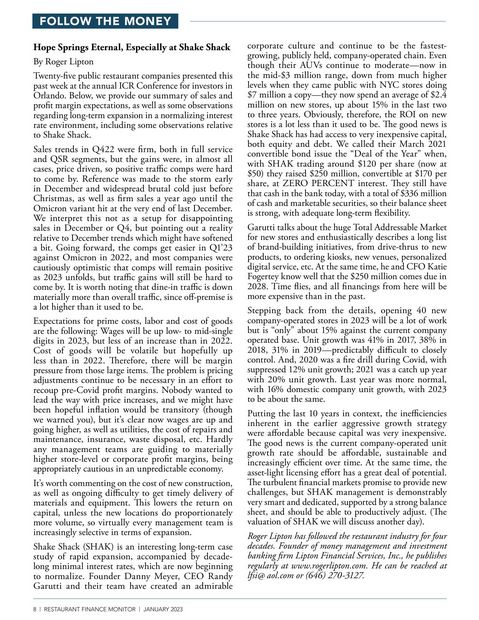