THE CAPITAL INTENSIVE RESTAURANT INDUSTRY WILL NO DOUBT BE CHOKED BY HIGHER INTEREST RATES – RIGHT? – READ ON.

There is no doubt that interest rates will be higher over the next decade than over the last. The logical expectation therefore is that restaurant companies will pay a higher price for expansion capital. With an increased cost of capital they will have to do proportionately more business to generate an acceptable return on investment.

The charts below this discussion shows the debt maturity schedules, and interest rates for most of the important publicly held companies.

(2) The first large maturity of debt occurs in 2026 when 20% of the industry total matures.

The blended interest rate is 4.5% and annual interest expense runs about $29M.  The Company intends to pay off the $300M of 3.875% bonds with its revolver at an interest rate of 3.375%. The company also has a revolver that matures August 2026 and carries a 4.875% interest rate. Therefore the company should be able to pay off both notes at maturity. While it seems likely that these notes will be replaced with a longer term debt instrument, and each point higher reflects almost $7M of additional interest expense, long term rates, over $300M of trailing twelve month EBITDA should provide adequate comfort for lenders.

The Company has $1.75B in debt maturing in 2023 and a total of $4.09B debt maturing in the next three years. The average interest rate on this debt is 3.4%. While each point of higher interest would cost almost $38M annually, lenders need not worry. At the end of September, SBUX had $2.8B of cash and marketable securities and trailing twelve month EBITDA was close to $6B.

We called their $250M of zero coupon convertible bonds, convertible at  $170/share, the 2021 deal of the year. It now looks like the deal of the decade. They’ve had the use of $250M of zero percent money for eight years and you don’t need a very high ROI to get a positive carry against zero cost. Moreover, SHAK had $337M of cash on the balance sheet in September, and is continuing the rapid expansion to build upon their current $64M of trailing Adjusted EBITDA. By 2028, EBITDA run rate should be much higher than $100M, providing, on top of cash at that point, more than adequate comfort to new lenders. Alternatively, if the stock is over $170 per share, the bond could be converted to shares. That might have seemed a possibility in early 2021, with the stock at $120, but is less likely two years later with the stock at $51. In any event, Shake Shack’s balance sheet is liquid and strong, and likely to remain so for the foreseeable future.

While the battle for market share, that I originally described about forty years ago, continues, the widely owned publicly held restaurant companies have done an admirable job of managing their balance sheets. Capital is therefore available for investment in productive brick and mortar, and even for support of franchise systems, though institutional investors like to think of royalties as free cash flow. The publicly held restaurant chains are by and large in excellent shape to cope with the current challenging environment.

In the table below, we have sorted the companies by the estimated average interest rate being paid on their debt. We have also included a debt maturity schedule. Please note that McDonald’s aggregates all of their debt outstanding and does not provide the individual bonds and notes in their 10K or 10Qs. All of the companies that have debt maturing in 2023 have more than enough liquidity to initially retire the debt before having to term it out. However, if rates continue to rise or credit markets tighten due to a recession, these companies may have to pay a higher rate of interest than they anticipate. We will monitor the credit worthiness of companies that have refinancing risk and discuss them in future updates. 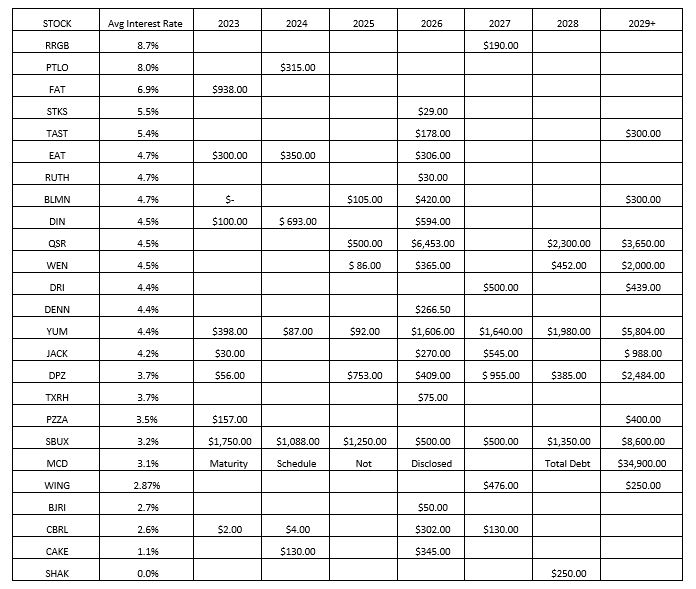 Fat Brands, Wingstop, Yum! Brands, Wendy’s, Jack in the Box and Dine Brands Global all have securitizations outstanding. While the maturity dates of the securitizations are beyond 2048, most companies anticipate refinancing them well before that. For the moment, however, the spike in interest rates has put even preliminary negotiations on hold. 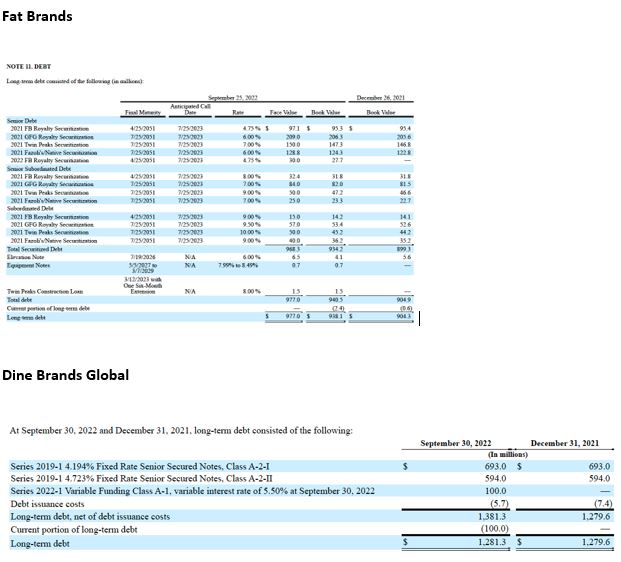 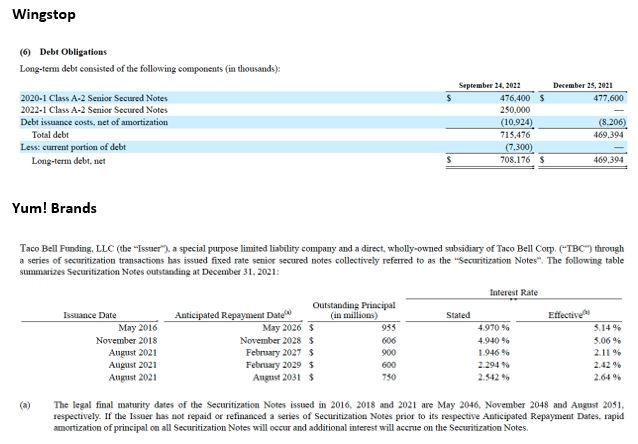 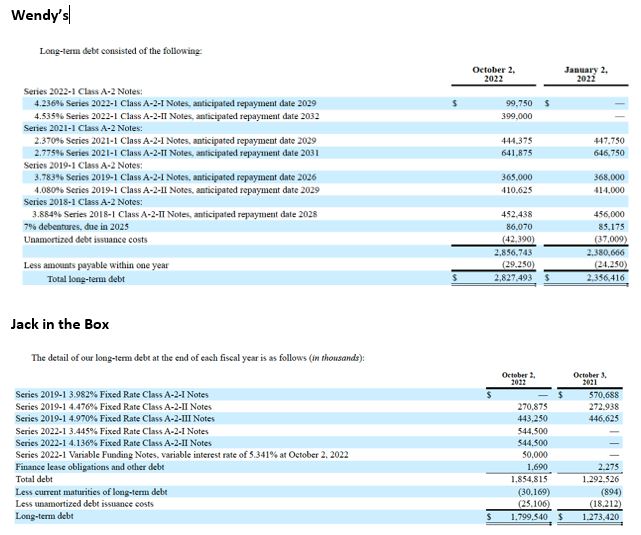