Everybody makes mistakes, even Starbucks. Maybe it’s just “optics”, but optics help to differentiate the commodity that each of us is selling.

We don’t have access to the reams of numbers that Starbucks’ management is provided that detail the spending habits of 29M US Starbucks Rewards members. We have to believe, however, that our personal pattern of accumulating Reward points sufficient to get a free drink (usually larger than normal, since there is no size limit) is typical of most members.

Just a few years ago it required 125 “stars”, spending $62.50, to earn a free drink. The free $6.00 vente soy latte’ amounted to almost a 10% discount spread across the total of eleven drinks. A couple of years ago, the requirement was increased to 150 stars, requiring $75.00 spent. The effective discount was reduced to about 8.7%.

Starbucks just announced that it is updating its loyalty program, starting February 13th, increasing the number of stars (from 150 to 200) to redeem select items (including hot drinks) for free.

There are other changes, with some reductions, but those apply to iced coffee and tea (not including cold brew beverages), packaged coffee and select merchandise.

Inflation, the cruelest tax, is affecting us all, and the marketing department at Starbucks, who has (understandably) done their share of raising prices, decides to throw salt into the wound by reducing the effective discount for   Rewards members by 1.7 points. Safe to say that hardly any of the 28.7M Rewards members are now thanking Starbucks.

The table below shows how the number of US active Rewards members has grown in the last two and half years, since new Rewards payments options, as well as Stars for Everyone was introduced.

To be sure, the number of members has increased by 48%, and the percentage of US revenues that is generated by members is comfortably over 55%. In the near term, at least until this latest adjustment is digested, no pun intended,  we suspect the growth in US Rewards members will slow, and not just because of the law of large numbers.

Starbucks’ management is too skilled to allow a mis-step to become a major stumble. They have access to 28.7M US customers and they will somehow make amends. Still, loyal customers, including myself, did not need to wake up to this news. Some might even decide that they don’t need “their” Starbucks quite as often. Dunkin’, Horton’s, Dutch Bros, etc. also sell coffee, and the Keurig machine works pretty well.

P.S. For Starbucks management: I would not bother to mention it, but I’m probably not the only one, whose birthday you’ve forgotten. I used to get a free drink on that day. How much aggravation can a guy take😊 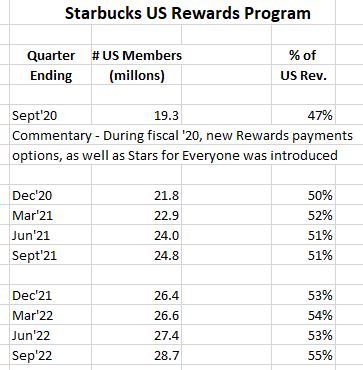