Austan Goolsbee, about to join the Fed as President of the Chicago Fed, kicked off RFDC2022 last month with a broad economic brush. His talk was entertaining and substantive, but there were some serious omissions and questionable generalizations.

He discussed whether the current soft economy is due to speculative bubbles bursting (as in dotcoms, housing, crypto, etc.), escalating inflation (as in higher food & energy prices), or sharply higher interest rates (as in the 1970s). He admitted that the Federal Reserve is currently forced to react after the fact to the recovery from the unprecedented Covid driven downturn which dried up (house-bound) demand for goods and services while increasing the need for hard goods (construction, durable goods, etc. Further complications have been the supply chain disruptions and a Ukraine driven oil price shock. This quandary leads to Goolsbee’s justifiable conclusion: the Fed will adjust monetary policy based on month to month, rather than YTY price comparisons, “core” focused, without food and energy.

However….Goolsbee ignored Central Banks’ role, printing unimaginable amounts of unbacked currency, creating the demand that has produced the predictable rise in prices. When worldwide Central Banks print $20T out of thin air, it seems irrefutable that prices will be affected.  Goolsbee suggested that the broad worldwide inflationary trends were perhaps driven by supply shocks, rather than increased demand, because “all those other countries don’t have the same fiscal policy (as ours)”. Specifying “fiscal”, rather than “monetary” policy may not have been a casual choice of words because Japan, China, the Bank of England and the European Central Bank, have also been active proponents of monetary ease.

Goolsbee concluded his prepared remarks on an optimistic note, pointing out the US creativity and productivity has taken the Dow Jones Average from 50 to 30,000 in the last 100 years, the implication being that the future could be similar. No doubt the last 100 years have been productive, but a US Dollar in 1913, when the Federal Reserve was established to control inflation, is worth about $.02 today. The 30,000 Dow Jones Average must therefore be divided by 50, becoming 600, still good growth from 50, but over a century and spanning an industrial revolution.

The last question from the audience (“How should we be thinking of the US Debt to GDP ratio of 120%, without unfunded entitlements?”) elicited a profound response. After joking “Oh, look at the time, we’re out of time”, Goolsbee responded: While Social Security, Medicare and other entitlements would take the $32T to $75T, “a lot of cash will come in before then”. On this point alone, I must interject, does anyone remember Charles Ponzi? Goolsbee went on: “The debt is high, but not that high compared to others, the cost of servicing that debt is tolerable. and other countries have much higher taxes, including sales tax, which we could implement”. I say:  (1) The cost of servicing that debt, worldwide, is no longer minimal. (2) Japan’s debt to GDP ratio of 250% has been tolerable because, as opposed to ourselves,  the Japanese have a traditional trade surplus and much higher personal savings rates (3) The Japanese Central Bank, as a result of their interest rate suppression, now owns a great deal of their ETFs and government securities, essentially nationalizing a large part of their financial markets, also not a situation we aspire to. (4) Higher taxes would burden our economy as it has elsewhere.

Give Goolsbee credit for a candid summary. “While it’s not an immediate crisis, the problem is to pay back the money. Generationally it is messed up and kids born today will pay.”

Will the capital intensive restaurant industry be choked by higher interest rates? Surprisingly…..no. We surveyed the largest publicly traded restaurant companies, the details of which can be seen (article dated 12/9) at www.rogerlipton.com. The space here allows us to summarize: (1) Over 40% of the outstanding debt matures in 2029 or later. (2) The first material maturity of debt occurs in 2026, a manageable 20% of the current total (3) The median interest rate is a reasonable 4.5%. (4) Three companies have very low coupon convertible debt outstanding. Cracker Barrel @ 2.6%, Shake Shack @ 0%, Cheesecake Factory @1%. (5) On the high side of interest rates – Red Robin is paying 8.7% and Portillo’s is at 8.8%. At Red Robin:  $199M comes due in 2026 but the company has generated $81M in Adjusted EBITDA in the trailing twelve months ending Sept.’22, $12M has been generated from the sales of assets, and there is $50M of cash with total liquidity reported at $133M, so it looks like RRGB has lots of cards to play. At Portillo’s: there are $318M of First Lien Loans maturing in 2024, with interest expense running around $28M annualized, but still manageable at 31% of TTM Adjusted EBITDA. This above-average debt structure is partly due to the recent public emergence out of private equity ownership. Deleveraging is a stated long term objective and, in the meantime, PTLO should be easily able to handle reasonable short term structural adjustments. Elsewhere: Brinker, Starbucks and Shake Shack have noteworthy situations, in terms of eye-catching amounts of debt maturing within five years. However: Brinker has over $300M of TTM EBITDA supporting its $650M total of ’24 and ‘26 maturations, Starbucks has close to $6B of TTM EBITDA and $2.8B of cash behind its $4B of debt maturing within the next three years, and Shake Shack (with $64M of TTM EBITDA currently) should have well over $100M of TTM EBITDA by 2028 when $250M @ zero percent, convertible at $170/share, from 2021 matures. In conclusion, publicly held restaurant chains have, in virtually all cases, managed balance sheets well.  Almost all are storm safe, if not bullet proof. 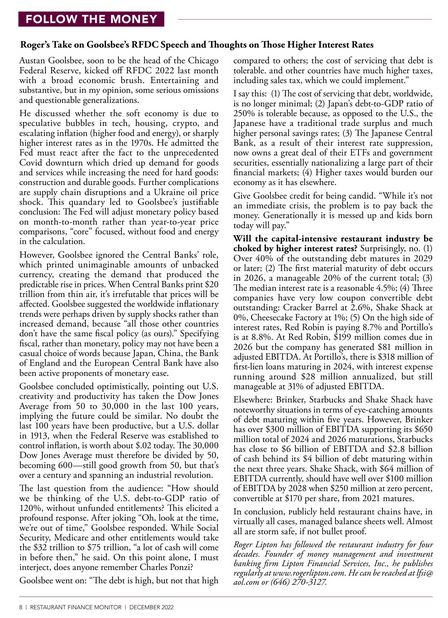