Looking back briefly: October’s stock market was the best in decades, but that was a bounce within a well established downtrend. The bond market stabilized, after two year treasury notes, for example, have risen an unbelievable ten times, from well under 1% to 4.7%. Much higher interest rates have predictably reduced the valuation of both stocks and bonds. Most investors are no doubt shell shocked by their recent brokerage statements, if they even choose to open the envelope. We will discuss the practical effects of these trends at the end of this discussion.

We could write volumes about our investing mistakes, but this column has not led operators or investors too far astray. We could go back further, but, most recently: In August we talked about the inexpensive valuations possibly representing a “value trap”, and cited Chuy’s as an example. While CHUY, the stock, is up since then, their trailing twelve month reported EBITDA, from March through September, is down about 20%. In September we talked about the lack of insider buying and corporate buybacks, in spite of attractive valuations, possibly indicating that executives had their doubts about the outlook. Third quarter earnings, discussed below, have borne that out. In October we discussed how financially stretched diners are trading down, and wondered who would trade down to (well run) STK (STKS) with their $125pp average ticket. Our concern was borne out, as STKS reported disappointing results and, the stock, which was selling for only about 6x TTM EBITDA, has traded down by 20%. We also cautioned about the Chinese master franchisee of Tim Horton’s, which was folded into a SPAC, now trading at THCH. That business combo was valued at $10/share, traded at $8 as the deal was finalized in early October, was $6 when we described it, and trades under $4 now.

Speaking of SPACs, we’ve talked many times about the folly of hundreds of billions of dollars invested in SPACs, an adventure with a generally unattractive reward/risk equation for public investors. The SPAC sector is now “consolidating”, with very few participating companies trading above their $10 issue price. Other than THCH mentioned above, the only restaurant companies evolving from a SPAC within the last few years have been BurgerFi (BFI), now trading under $2.00, down from a post combination high in the mid-teens, and BRC Inc. (Black Rifle Coffee Company)  (BRCC), now trading under $8/share, down from $30. Several other restauranteur sponsors raised $200M or more, but haven’t found deals yet and liquidation, not the worst outcome, will likely be the result. More productively:  Doug Jacob, Sandy Beall, and Co. have sponsored three SPACs. The first, FAST Acquisition Corp., attempted to merge with Tilman Fertitta’s hospitality empire, then was liquidated after Fertitta paid $30M to walk away. The second, FAST Acquisition II (FZT) has an exciting hospitality/entertainment/intellectual-property deal pending, which we have previously described.  The third, Velocity Acquisition Corp (VELO) has yet to announce a target.  Danny Meyer’s USHG Acquisition Corp. (HUGS) terminated a proposed transaction with Panera Bread. Tastemaker Acquisition Corp. (TMKR), led by restauranteur Andrew Phorzheimer and David Pace, has recently announced an intriguing acquisition in the jewelry/gift industry that has doubled sales in ’22 to $534M, with $82M of EBITDA. Considering the long term operating challenges within the restaurant space, it wouldn’t surprise us if VELO and HUGS join TMKR in stepping away from four wall restaurant operations.

Third quarter, ending September’22, operating results for fourteen early reporters were instructive. It is fair to say that results have generally been below investor expectations. Space limited as we are here: Menu prices were up in a range of 7-10% YTY. and comp sales in most cases were not, so traffic (reportedly down 4.6% industry-wide) was down, with few exceptions. Commodity inflation, up from 8.8% at TX Roadhouse to as much as 21% at IHOP drove CGS higher by 200 bp or more. In spite of wage inflation,  Labor expense was generally flattish (up or down a point or so), with post-Covid staffing adjustments. Occupancy expense was up on the order of 50bp, largely driven by higher utilities. Store level profit (EBITDA), as a percent of sales was most often down, largely reflecting the higher CGS. The best store level EBITDA comparisons were at Chipotle (up 180bp to 23.5%), Potbelly (up 1.8% to 10.6%), Shake Shack (up 0.5% to 16.3%) and TX Roadhouse (down 0.3% to 15.4%). Worst, as a result of labor, were Chuy’s (down 5.8% to 17.5%) and El Pollo Loco (down 8.0% to 12.4%). Executives expect inflation to continue, but at a slower pace. This process, playing out in menu price management, may be reflecting industrial activity in general, as operators belatedly, and reluctantly, raise selling prices to catch up with higher and longer inflation than anticipated. The result is higher selling prices, even as inflation slows, to rebuild operating margin and return on investment.

Looking ahead, Interest rates have driven the value of homes and investment portfolios substantially lower, which creates a negative wealth effect. A couple buying a new home has mortgage payments about 50% higher than would have been the case a year ago, or alternatively they could buy a house about 33% smaller than they had hoped. Across the income spectrum, the cost of filling the gas tank, heating the home and putting food on the table is taking its toll. Menu prices have been taken up materially but not quite enough to maintain profit margins. Whatever the result of the mid-term election, the debt, the deficits, the inflation, the distortions following twenty years of fiscal/monetary mismanagement will not go away. As Warren Buffet would describe it, the tide has gone out, but we have yet to see all those who have been swimming naked. Be careful out there. 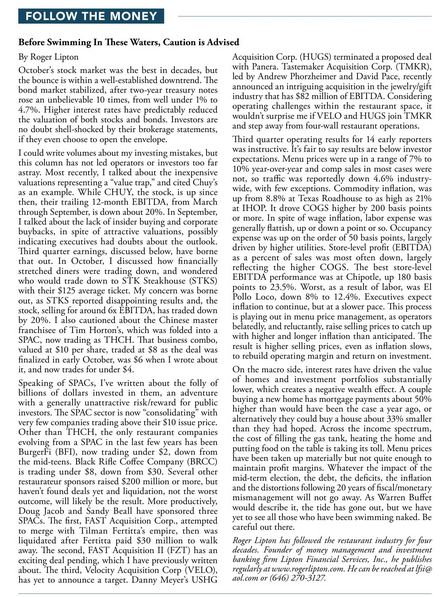