We have written about Ark Restaurants in the past, and encourage our readers to use the SEARCH function on our Home Page, for our previous descriptions of ARKR, its position and its prospects.

We have followed ARKR since it came pubic in the mid-1980s operating with a few large-scale dinner houses in NYC (e.g., 500 seat “America” on 18th Street) catering to “yuppies”. There was often a “story” and the Company has been consistently profitable, though not on a straight-line upward path. For a combination of reasons, the publicly owned stock was hardly ever embraced. The lack of a “cookie cutter” brand with visible “white space”, operating results that proved to be inconsistent, and the Company’s ability to pursue growth initiatives without fresh capital from the public resulted in a lack of “coverage” by research analysts and statistical undervaluation of the stock. There has also been a limited amount of liquidity in ARKR since founder and CEO, Michael Weinstein, has always owned a practical controlling interest (27%) and outside public investors, with a long-term confidence in the Company, do not often trade.

An inflection point seems apparent. The balance sheet is the strongest in many years, easily capable of supporting future growth. The current base of cash flow generation, especially with the catering and special event activity just now rebounding from the Covid, is impressive relative to the Enterprise Value. Current properties, while running well, could be improved further once supply chain distortions and the labor crisis abates at least a bit, and there is an adjacent opportunity to build shareholder value through real estate (beneath restaurants) ownership. ARKR stock is statistically cheap based on trailing results alone, on top of which are (1) recovery of sales, especially related to catering and special events in NYC and DC (2) more growth in the southeast (3) long term participation in Las Vegas, which is booming again and (4) a material “kicker” by way of Ark’s ownership in The Meadowlands gaming venue. With an Enterprise Value only 4.3/7.8x trailing twelve months EBITDA (without/with capitalized leases), there seem to be a lot of ways to win with ARKR.

The business continues to recover, as shown in the table below. The company’s major markets, Florida, Las Vegas, and Alabama (85% of total revenue) continue to see growth over 2019 levels. Florida’s growth of 95% over 2019 was aided by the acquisitions of JB’s on the Beach and Blue Moon Fish Company; however, revenue was still up 48.5% over 2020. The Original Oyster House acquisitions in Alabama continue to produce substantial revenue growth, with revenue up 19% since 2019. Las Vegas continues to be strong, with convention business returning, showing a 1% increase over 2019 (compared to a 12% increase in Q1).  “Comp sales”, of concern to management and investors alike, are not strictly relevant at the moment, due to social distancing and other Covid-related operating limitations. 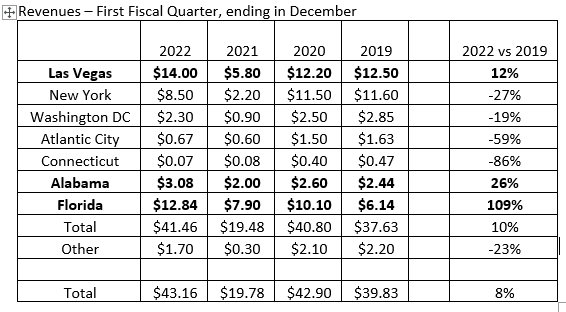 Per the Conference Call:

While many major retailers and some restaurant chains have reported a weakening in consumer demand, ARKR management continued to see strong demand in May. The rebound in the events/catering business in NYC and Washington D.C. is helping drive this sustained improvement.

Relative to the June quarter, according to CEO, Michael Weinstein:

“by way of illustrating current trends, Bryant Park is doing $100,000/day at the moment, up substantially from the March quarter, a lot of that driven by events and has a calendar that is full to the end of June. Sequoia is seeing the same thing, a lot of events on their calendar…….we are six weeks into the June quarter. We’ve seen extremely strong results from the restaurants. So, I expect the June quarter to exceed our own projections and expectations.

In response to a question regarding the current effect of Omicron variants:

“We’re not seeing that in our location in Vegas, we’re certainly not seeing it in New York…..and we weren’t seeing it in Florida or Alabama as of last week. We’ve seen a dramatic pickup in New York and Washington D.C., in part driven by a very strong event calendar in May and June.”

The improvement in the events/catering business is starting to show up in the financials as well. While the earned revenue YTD (and last year) was about 50% of levels in the previous two years (as shown in Chart 1 below), unearned catering revenue (as shown in Chart 2 below), a leading indicator of future revenue, is $5.77M, over 40% above the levels of the past two years (Chart 3), when Ark did $13.80M and $7.36M in catering for the year. Since catering revenue for 2021 was only $3.2M, this venue should show a substantial increase this year versus last. Investors should keep in mind that Event/Catering Revenue generally carries relatively higher profit margins.

CHALLENGES REMAIN – LABOR, OF COURSE, AND COST OF GOODS AS WELL

For the third time in the last four quarters, the company has seen a 300bp contraction in its gross margin. ARKR continues to feel the pressure of higher seafood costs. However, ARKR is not alone when it comes to higher seafood costs. Here are comments from Full House Resorts, a casino company that operates the Silver Slipper casino in Las Vegas:

At Ark, the 300bps increase in costs lowered the company’s operating income by just over $1M in the quarter. Rather than raising prices equally in all of its restaurants, as many restaurant chains do, management is raising prices selectively at each individual restaurant. Management believes that this attention to detail helps maintain brand equity in each market.

LAS VEGAS IS IMPORTANT, as shown in table above

The company has made significant progress on completing the three major lease extensions for the restaurants the company manages at the New York-New York casino in Las Vegas. On the conference call, CEO Weinstein said that all the leases are signed, or will be, within the next week or so. As a result of the extension, the company expects to spend up to $7M in leasehold improvements. Rents will be higher but there is pricing room on the menu, which will largely offset the higher occupancy expense. In the 10Q, the company disclosed that a 10 year extension for the Gallaghers Steakhouse location was signed in early April., Ark agreeing to spend $1.5M to “materially refresh” the restaurant. Considering that Las Vegas represents approximately one-third of the company’s revenue, this 10-year extension for all the leases in Las Vegas significantly reduces the risk while improving cash flow expectations.

As usual, CEO Weinstein provided significant color on the opportunity that lies ahead for the company if New Jersey eventually approves a casino for northern New Jersey. The following quotes from the Conference Call provide the most salient points.

On the conference call, CEO Weinstein kept that possibility open. As we have described in previous articles, in the past five years ARKR has been able to significantly improve a purchased property’s cash flow within two years of an acquisition. We believe that ARKR is in a unique position within a limited pool of bidders, to continue to acquire restaurants for below market multiples, in the area of 3-4x EBITDA, often paid entirely in cash. Ark’s typical subsequent approach is to retain operating management, providing them new growth opportunity which improves morale, at the same time providing administrative support and purchasing power which lowers operating costs. Larger restaurant chains are looking for “cookie cutter” brands that they can grow, while ARKR is happy to buy “one-off” well-established local institutions, typically looking for properties that can generate at least $1M in annual cash flow

The company has very little net debt. More precisely, at the end of Q2, the company had net debt (excluding PPP loans outstanding of $2.6M) of $6.7M. Since the end of the quarter, the company received a tax refund and other cash which has increased the cash position to approximately $24M (40% of market capitalization) vs. $27.8M of total debt at the end of Q2. This balance sheet strength is obviously a source of comfort to management and investors, and has allowed the company to resume a $0.125 per share quarterly dividend (3% yield at current prices). The dividend will cost the company approximately $1.8M a year in cash.