Capital Markets are in Turmoil – The inflation is unprecedented, prior to and now  exacerbated by, the Russian/Ukraine conflict. The .8% MTM increase of the CPI in February, up 7.9% YTY, has been touted as the highest since 13.5% in 1980. Don’t be misled. The CPI formula has been “adjusted” and would be up over 15% on the same basis as in 1980. Not since 1917 has the CPI, calculated consistently, been rising this fast. More importantly, do not expect the inflation rate to return anywhere close to the Fed’s long stated 2% annual objective. As long as “real” interest rates (the nominal short term interest rate less the pace of inflation (now about 1%-7.9% = negative 6.9%) are negative, consumers are incentivized to spend now rather than save. Paul Volcker, backed by Ronald Reagan, took the Fed Funds Rate to 18% in 1981 to squeeze out 13.5% inflation. Our Fed, even with half a dozen 25 basis point increases, will still be presiding over negative real rates of at least 300-400 basis points. Keep in mind that the total Federal debt was 30% of GDP in 1980 and it is over 120% today so interest expense with positive real rates would become about 50% of our government’s total expenditures. The bottom line is that the “stagflation” which we discussed in this column many months ago is now evident to all and will continue to be a fact of life. The Federal Reserve has no alternative but to “kick the can down the road”. Within the next week the Fed will start, ever so gingerly, to raise interest rates, and perhaps in a year or so begin to reduce the size of their balance sheet, now $9 trillion, up from about $1T in 2007. Their plan is essentially to continue to pour gasoline on the inflationary fire, just not quite as much as before, and that’s not tightening!  If you need to be convinced how dysfunctional our Federal Reserve system is, a worthwhile easy read is “Fed Up” by Danielle DiMartino Booth.

It’s all about Traffic and AUVs. Many publicly held restaurant companies have just reported their calendar 2021 results. There are obviously a lot of moving parts as Covid adjustments recede, while labor and supply chain challenges continue to complicate the new combination of dine-in and off-premise service. Companies are headlining same store sales results, compared to both 2020 and 2019, and discussing as well their new dine-in/off-premise breakdown. Quite a few comparisons to 2019  are now positive and that’s good, of course. The analysts dutifully inquire about recent price increases and management refers to several points taken in the last six months and the likelihood of another price increase later in 2022. We can’t recall any management team adding together the price adjustments within the last two years and saying: “Our prices are x% higher than a year ago and xx% higher than two years ago”. We therefore went back 24 months with conference call transcripts for over twenty companies, consolidated menu price disclosures, and found that the average price increase has been about 10% over the last twenty four months. We learned a long time ago that: if the top line is there, the costs can be managed, so we compared AUVs of almost thirty companies in Q4’21 to Q4’19. Space here does not allow a complete listing, but, not surprisingly, Chipotle is doing very well, quarterly AUV up 20% over two years, Wingstop and Papa John’s are up 26-27%. We were not surprised that AUV at Shake Shack was flat vs Q4’19 by our calculation, obviously hit hard by Covid (with SSS up 2.2%), but did not expect that BJ’s would have both AUV and SSS down about 1%. Traffic counts, obviously, are down materially at Shake Shack and BJ’s, so both companies can be considered a “work in progress”. It’s the simplest of calculations but well worth doing.

“Lot’s of White Space”, or a “Long Runway” are the standard response to questions regarding unit growth opportunities. When there aren’t enough large cities to accommodate hundreds of additional 12,000 foot dinner houses, the operator, after exhaustive analysis, magically decides that a 5-6000 square foot version will generate an even higher ROI, allowing for “infilling” of markets and even stronger performance from the existing locations. If it’s a fast casual concept to start, an “express” version will be even more efficient, especially in our post-Covid world. If good locations for the “express” are too expensive, there are predictably opportunities for thousands of “non-traditional” units. Our observation is that there is hardly ever a shortage of locations for a successful concept. If there were, the presence of Starbucks, with 17,000 locations in North America would not have left room for Dutch Bros. or Black Rifle Coffee to emerge with hundreds of locations, soon to be thousands, doing even higher volumes than Starbucks. Some of the largest restaurant companies (e.g. McDonald’s, Yum Brands, Starbucks) have chosen to chase a higher ROI and a foothold in China, de-emphasizing further rapid growth in the USA, but for almost everyone else there is no shortage of locations. The realistic limiting factor will be maintaining your originally attractive ROI, without forfeiting the corporate culture that originally brought you to the party.

Wingstop knows how to “return cash to shareholders”. In addition to their normal modest quarterly dividend, they have announced a $4.00/share special dividend, after $5.00/share in 2020, $3.05/share in 2018 and $2.90/share in 2016. The more common approach is to buy stock in the open market, often at inflated prices, that is largely reissued in executive stock options. A more appropriate description is “returning corporate cash to executives”. If you can’t shrink the share count materially, I’ll take the cash. 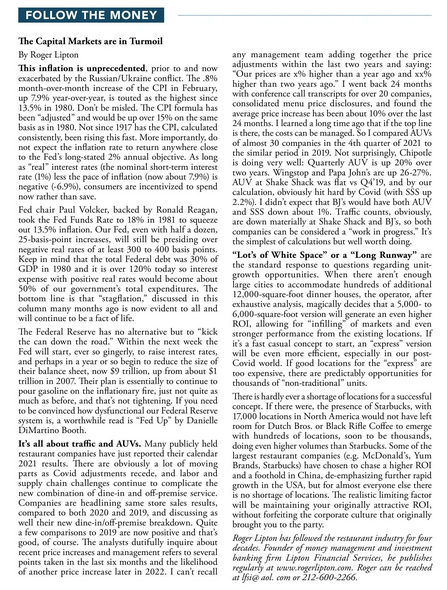