CONCLUSION: Noble Roman’s is not unique in that the last two years have been unpredictable and difficult. Challenging though it has been, the potential for substantial growth seems undiminished. Nine company run NRCPPs are now operating, at higher AUVs than the four “legacy” locations, the first of which is now five years old. CEO, Scott Mobley, did an effective job over the last two years, keeping the supplies coming in the back door, motivating employees and satisfying customers. The “hands-on” aspect of this regional brand served all stakeholders well. As the COVID runs its final lap (we hope), NROM should be able to make progress toward its long-term potential. An inflection point could well be at hand, since CFO Paul Mobley indicated that sales at the four original NRCPPs in the last five weeks are annualizing 13% higher than a year ago. He also indicated that the five most recent locations are doing “modestly” better than the first four. Our analysis, as shown below, indicates that the current AUV run rate of the nine locations, now at, or just above $1.2M, could improve substantially if dine-in revenues return anywhere close to pre-COVID levels. There are 23M shares outstanding, worth about $8-10M currently, with $9M of debt, and $1M of cash, so the Enterprise Value is only about $17M, an obviously modest valuation relative to EBITDA which has been in the $2.5-$3.0M range for years now, and should be able to move materially higher.

Noble Roman’s fourth quarter reflected the remaining effects of Covid as well as supply chain challenges. Recall that NROM entered 2021 with seven Craft Pizza and Pub company operated locations and opened the eighth and ninth during Q4. At the same time, the non-traditional franchised locations, over 600 units mostly in C-stores and gas stations, were seriously affected by the Covid in terms of customer traffic as well as labor challenges during the post-Covid period. The non-traditional segment has been steadily and slowly recovering through Q4’21 and into Q1’22.

As the table below shows, the revenues were materially higher, YTY, in Q4, largely reflecting the addition of two new Craft Pub locations during Q4’21. At the same time, Q4 showed higher salaries and wages, packaging, and other operating expenses due to the labor crisis and inflation within the supply chain. Though facility costs were higher in Q4, they were materially lower for the year as a result of better rent structure on the most recently opened locations. 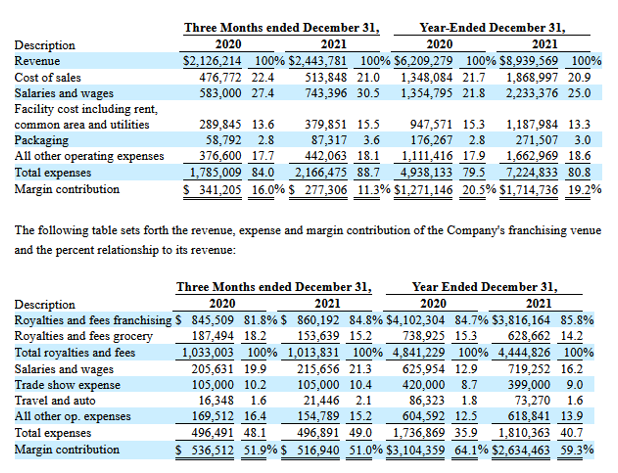 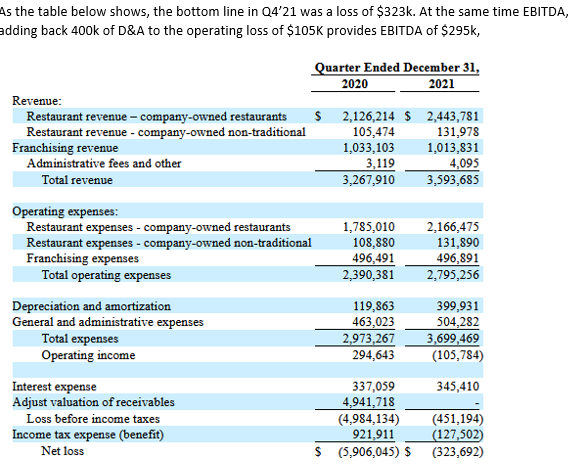 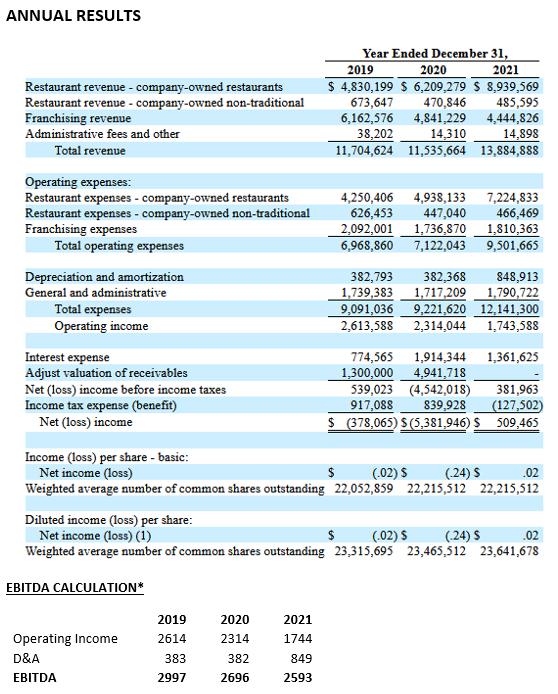 D&A was inflated in 2021 by the write-off of $471k of pre-opening expenses, which previously had been amortized during the post-opening twelve months. It should also be noted that EBITDA both in ’20 and ’21 were positively affected by PPP loans, subsequently forgiven: $715k in 2020 and $941k in 2021, obviously provided to offset non-recurring expenses incurred during the worst of COVID-19.

As stated by CEO, Scott Mobley: “the fourth quarter of 2021, continuing through the first month or so of ’22 brough the most challenging operating environment I have experienced in the last thirty years….the period from mid-November through mid-January 2022 required a constant emergency footing, responding daily to pricing issues, ingredient shortages, personnel shortages, COVID isolations and quarantines, disruptions in to distribution and shortages of equipment parts and service. Additionally, many non-traditional franchisees operate within a small business that sometimes lack the capitalizations or liquidity to manage through these disruptions and are most affected by the labor shortages that impact their ability to operate or add a franchise to their small business. With all of that in mind, we are very pleased with progress in new revenue generation, and are excited to continue growth at Craft Pizza and Pubs, as well as our non-traditional franchising effort.”

With the above overview by Mobley, we describe below the current situation at both important divisions (CPP and non-traditional) and their prospects for continued recovery from the last two chaotic years.

For all the obvious reasons, comparisons of ’21 to ’20 are of limited use. Therefore, as we’ve done with many of the restaurant companies we follow, we compare Q4’21 (“mostly” recovered, though still inhibited by supply chain challenges) to Q4’19 (Pre-COVID). We calculated that the four NRCPPs in ’19 were generating annualized sales (AUVs) of $1.136M. In Q4’21, nine stores were operating at yearend ’21, but two of them opened in Q4, and the average number of stores operating was almost exactly eight. (One opened in mid-October and the other in mid-December). Dividing the NRCPP revenues in Q4 by eight provides an indicated AUV of $1.221M, higher by 7.4%. There are no doubt extenuating factors affecting this approximation. For example: Q4’21 included the honeymoon period of the newest stores. At the same time, however, COVID was still depressing sales in Q4’21. A reasonable conclusion is that NROM is coming out of COVID stronger than going in: nine profitable stores with a better AUV than the four stores had in Q4’19.

The above calculation is consistent with CFO, Paul Mobley’s statement on the conference call that in the most recent five weeks, the original four stores are running up 13% versus ’21, annualizing at $1.2M vs $1.057M. He said further that the most recently opened five locations are generating AUVs modestly more than the original four.

There was further disclosure on the conference call, relative to the breakdown between dine-in and off-premise revenues. Recall that NROM pioneered several years ago a “Pizza Valet” curbside pickup option, which became instrumental during the COVID. The following table shows the pre-COVID, Q4’19 breakdown between the two segments, along with the percentages today and a year ago. You can see that the off-premise segment grew substantially (well over 100%)  during the COVID, with the gains holding as COVID burns out. This analysis shows that if the off-premise segment can be largely retained, and the dine-in sales can be mostly regained, the AUVs could move closer to $1.5M than the current $1.2M+ run rate. A realistic caveat is that the degree to which off-premise activity cannibalizes dine-in is an unknown, as well as how third party sales affect the total. 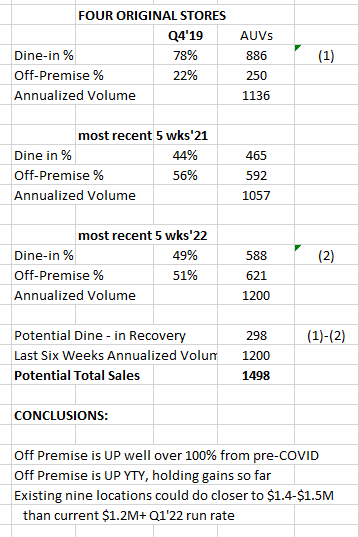 While this segment consisting of over 600 locations remains very profitable, the decline in royalties, for obvious and uncontrollable reasons, has been material, down more than 25% from 2019 through 2021 to $3.8M of annual royalties from 2019 to 2021. From commentary within the earnings release, as well as on the conference call, indications are that non-traditional franchise sales and openings are building up again. During 2021 there were 24 units opened, 24 units sold and 19 closed. So far in ’22 to date, there have been 6 units opened, 6 units sold and only 1 closed, as more corporate resources have been redirected to this segment. Momentum was starting to build prior to the COVID and management is obviously doing their best to re-ignite that trend. There are obviously thousands of non-traditional sites, including C-stores, gas stations, entertainment venues, etc. that that can be considered the target market.

Management made it clear on the conference call that, now that the COVID smoke is clearing, sales and operating margins should improve at the NRCPPs and there is fresh interest from existing and new non-traditional franchisees. New locations are being sought for the NRCPP and openings will take place as appropriate leases are signed. The balance sheet had $1.2M of cash at 12/31, so should be able to support company NRCPP expansion from cash on hand and operating cash flow.

CONCLUSION: Provided at the beginning of this article.