MEMORIES ARE SHORT WHEN CAPITAL IS CHEAP

WHAT GOES AROUND COMES AROUND – Some of us have been around long enough to experience a number of restaurant industry cycles. Whether because “some things never change” or “people never learn”, the supposedly recession resistant restaurant industry too often mirrors the predictably cyclical steel and airline industries or the commodity cycle. Good times stimulate strong sales and profits, easy money creates overvaluation, capacity expansion creates the vulnerability ahead of inevitably weaker sales, followed by margin contraction and a multi-year capacity shakeout. The good news is that memories are short and new concepts invariably incubate while the industry contracts. Once consumer demand picks up, for any combination of reasons, new concepts emerge to serve the latest consumer requirements. As the Covid runs its course, with capital never more available to qualified operators, we now see Dutch Bros, First Watch, Krispy Kreme (again) all publicly held, soon to be joined by Portillo’s and probably Sweetgreen. All these situations are carrying valuations that are historically on the high side, most notably Dutch Bros. Additionally, restaurant related SPACs have raised almost a billion dollars, which will lead to $4-5 billion of deal activity. Lastly, easy money has also been instrumental in the emergence of a new group of multi-branded restaurant platforms, including publicly held FAT Brands, BBQ Holdings and BurgerFi, and it’s happening privately as well. Before you fall in love with the emerging names and corporate strategies, allow us to provide some therapy by way of remembering departed favorites such as: Flakey Jakes, Delites, Po Folks, G.D.Ritzy’s, Chi-Chi’s (with franchisees, Consul and Kelly Johnson), Green Burrito, Shoney’s, El Torito, Bennigan’s and Bob Evan’s Farms. Surviving, but a frail shadow of their former selves are Arthur Treacher’s, Ponderosa, Village Inn, Sbarro, Fuddrucker’s and, my personal favorite, Boston Market. Lastly, from a historical perspective, two of the most successful companies in the 1980s were Chi-Chi’s and Ryan’s Family Steakhouses. On the positive side, however: while some of the above concepts were never ready for prime time, the demise of virtually every other prominent concept was the result of self inflicted wounds, not competition or industry overbuilding. It was new products introduced prematurely, inadequate attention to operating details, too rapid widespread geographical expansion that could not be properly supported, poorly selected or supervised franchisees. It may also have been founders and/or top management getting outgrown by an expanding business, leaders becoming adequately wealthy and distracted one way or another, or just running out of steam in a very demanding game. Those obvious general pitfalls aside, an operator sufficiently driven toward day to day “blocking and tackling” need not fear the competition. There are many examples of perseverance overcoming competition as intense as one can imagine. Just a couple at top of mind are (1) the extraordinary success, in spite of Starbucks, of Dutch Bros and (2) Chic Fil A, doing twice the volume, in only six days a week, of a little Company called McDonald’s.   There is hope!

RECENT IPO VALUATIONS – There have been three IPOs this year: Krispy Kreme (DNUT) again, Dutch Bros (BROS), First Watch (FWRG) and Portillo’s (PTLO) is on deck. Krispy Kreme came public mid-year at $17/share, now trades at just above $14  with an Enterprise Value of $2.6B, about 14x the $185M current run rate of EBITDA. First Watch came public two weeks ago, at $18, now trades around $21/share, with a current Enterprise Value of about $1.2B, about 18x the current run rate of EBITDA. Dutch Bros (BROS) came public just a month ago at $23/share, and now trades at $50 with an Enterprise Value about EIGHTY TIMES trailing adjusted EBITDA. Portillo’s (PTLO) is due soon, with an Enterprise Value at the $17 contemplated IPO price of about $1.4B, about 14x the current run rate of EBITDA. These situations obviously differ substantially, with Dutch Bros checking all the boxes. There are writeups on all four companies on our website and as the previous segment, above suggests: be careful out there!

OPERATORS IN A CAPITAL INTENSIVE BUSINESS CANNOT IGNORE MONETARY DEVELOPMENTS – The talk has been about the Fed’s plan to “taper”, that is to reduce the amount of securities they are purchasing (which has been running about $120B per month) and allow interest rates to rise. For months Fed Chair, Powell, has been describing the escalation in consumer prices (lately at 5%, well above the 2% Fed target) as “transitory” and reiterating the Fed’s intention to reduce their monetary “accommodation” soon. Among the problems with the plan are (1) The economy is not strong enough to withstand a material rise in interest rates (2) The Fed has been the “buyer of last resort” with their newly printed currency, its purchases approaching half of all Treasuries issued.  You would think that the hundreds of PHDs at the Fed would have noticed that oil and gas prices have risen, menu prices are up, the minimum wage is a lot higher, supply chain challenges are commonplace and higher prices are hardly ever rolled back. Taper “talk” is just that. Recall that the Fed balance sheet rose from under $1 trillion to $4.3 trillion in coping with the ’08-’09 crisis, was reduced a few years ago, got all the way down to $3.7 trillion before the weak stock market and the politicians provided a “taper tantrum”. In the wake of Covid-19, the Fed’s balance sheet has grown from $7.06 trillion on 9/30/20 to $8.49 trillion last week, growing at about $120B a month on virtually a straight line, and we don’t believe it flattens much any time soon. Our best guess remains that a 1970s type “stagflation” has already begun. All is not lost, however. While consumer spending will remain constrained, well positioned operators will continue to find capital available at historically low rates. 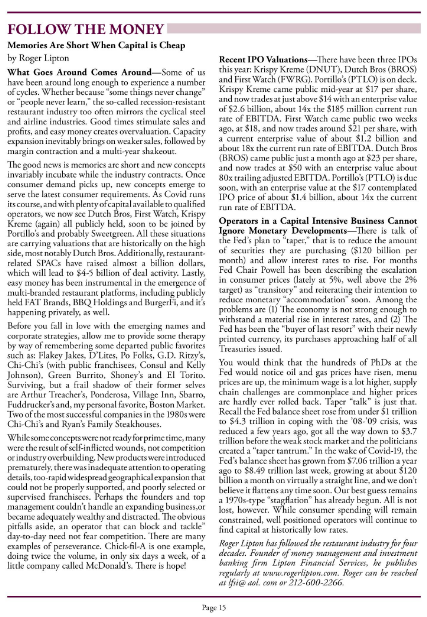 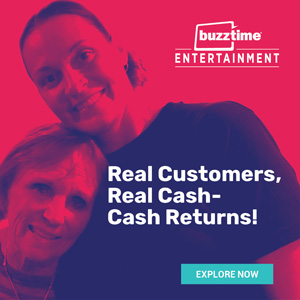