FIRST WATCH (FWRG) COMES PUBLIC, TOWARD THE BOTTOM OF ITS FILING RANGE, TRADES UP OVER 20%, WHAT TO DO? 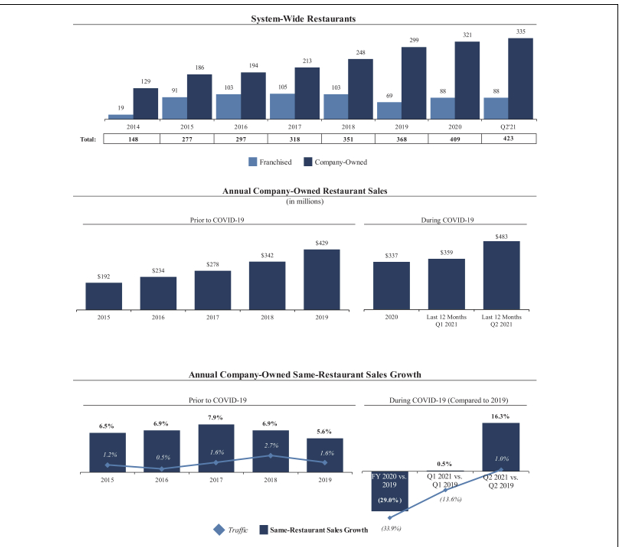 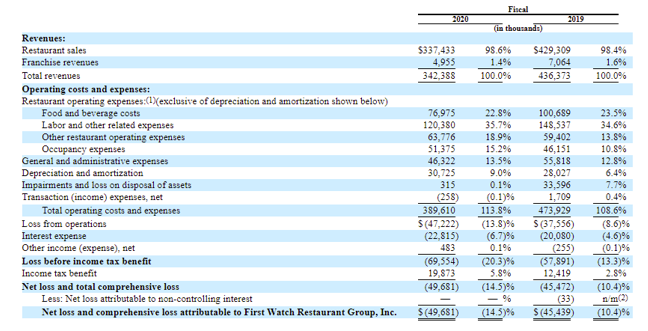 RESULTS FROM CALENDAR 2019 THROUGH SIX MONTHS OF ‘21 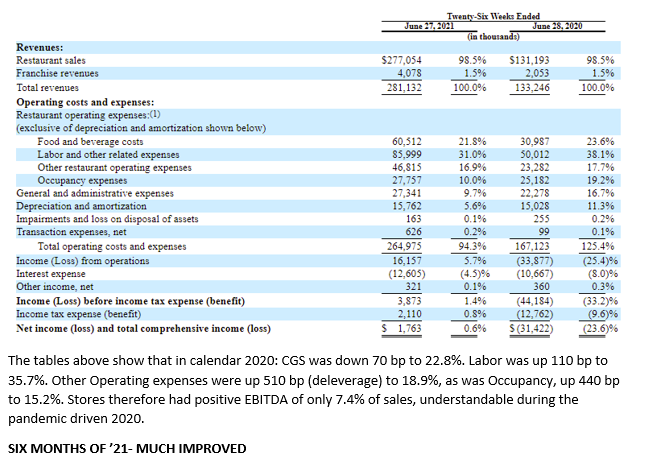 Adjusted EBITDA is the name of the game these days, so we will play along, though it’s never as simple as it sounds. Adjusted EBITDA in the first six months of ’21 has been $35.2M vs a loss of $11.8M in ’20 and a positive $38.1M in calendar 2019 (negative $5.7M in calendar ’20). The table shows, though, that there were material non-recurring additions in calendar ’19. We therefore consider “EBITDA” before the Adjustments to be the most relevant comparison, which is $32.2M vs a loss of $9.8M. Bottom line: the first six months of ’21 has generated $32M or so of cash flow from operations, annualizing to a current run rate of about $70M, which the Company plans to build on. This material improvement from calendar 2019 is a result of materially higher sales per location, dramatically so in Q2’21, combined with 280 bp improvement in store level profit.

THE VALUATION and our CONCLUSION

With approximately 57.6M shares outstanding, FWRG, is currently trading at $22.54 (up from the $18.00 offering price), therefore valued at about $1.3 billion, just under 20x the apparent current EBITDA run rate. We will fill in more of the operating details in the near future, but for the moment we consider FWRG fairly valued. While trading up over 20% from its IPO price, it doesn’t have the excitement of Dutch Bros (BROS), for example. This may have something to do with the fact that BROS generates almost as much revenues per store, with higher margins, in a space half the size. Also, First Watch guides to a store level EBITDA of 40%, but not until year three. This is admirable but also not as compelling as BROS. Of course, the valuation of FWRG, as a multiple of the Adjusted EBITDA run rate, is about one third that of BROS. There is sometimes a method to the market’s madness😊