SEMI-MONTHLY FISCAL/MONETARY UPDATE – “FADE” THE DIALOGUE – HERE ARE THE FACTS!

The almost daily commentary from the Federal Reserve agents, Chairman Jerome Powell on Wednesdays and his agents, from Thursday through Tuesday, describe how their objective is to create at least 2% inflation over the long term. Since the rate of inflation has been below 2% for years, they will tolerate something more for an undefined term, aiming for a “symmetrical 2%”. The inflationary measures are clearly running over well over 2% this year but that is described as “transitory”, with the expectation that this rate (the second derivative) will soon come down. At that indeterminate time the Fed will “taper” their purchase of $120B per month of marketable securities and encourage higher rates. Many observers, including ourselves, have serious doubts about the economy’s ability to withstand higher interest rates, and expect the Fed to continue to kick the can down the road, as they have basically done consistently over the last twenty years or more.

Recall that several years ago, in late 2018, the Fed, after printing over $3T in the wake of the ’08-’09 crisis, reduced their balance sheet by about $500B over a few months, the stock market tanked about 20%, the political/economic punditry quickly screamed “basta” and the Fed backed off. The Fed balance sheet, at that point had been reduced to about $3.7T. Three years later it is over $8T.

Here’s what the facts indicate at this point in time.

Because the producer price index (PPI) measures inflation from the perspective of costs to producers of products before they reach consumers, it is generally thought to be a leading indicator of price changes that consumers will soon experience, to be reflected by the CPI.

The following charts show the reported changes in the CPI, on a monthly basis and over the last twelve months. You can see that prices are still rising but the monthly increase has “flattened” in the range of 0.5% per month. The twelve month 4-5% change is obviously well above the Fed 2% target, but their prediction continues to be that this rate is transitory, largely stimulated by the emergence from the pandemic. 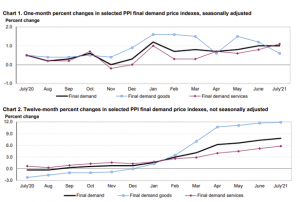 We don’t profess to know whether these charts will continue, in the short run, to move upward to the right or not. Important policy decisions fall, for better or worse, to Jerome Powell & Co., who do not have a good record of foretelling major economic events. Though Powell didn’t create the fiscal/monetary mess the world faces, he is forced to do his best to avoid, on his watch, the inevitable fallout from decades of financial promiscuity.