We are living through an extraordinary time in terms of fiscal/monetary developments. The money supply in the US has surged by an unprecedented 30% in the last fifteen months. Common sense dictates that a sharply higher amount of currency chasing a fixed amounts of goods and services will result in higher prices. Our Federal Reserve bankers have suggested that the already demonstrated increase in the cost of living is transitory. Terminology aside, inflation by any measure has clearly gained a foothold. There is an active debate as to what rate the rise in prices will continue. We hasten to point out that even if the rise in prices, after rising to 5 or 6 percent this year, then comes back down to only 2-3%, prices a couple of years from now will be 10% higher and nobody is suggesting that prices will decline from that point. Our currency will have lost 10% of its purchasing power. The rate of the rise may have been transitory but the higher prices will remain and grow from there.

Transitory inflation or not, our readers know that we consider gold to be an attractive store of value and the gold mining stocks to be substantially undervalued. The following charts provide our base case.

The first two charts show how the price of gold correlates with increasingly negative “real” (adjusted for inflation) short term interest rates  and the growth in Central Bank assets.

The next five charts provide a historical overview as to the attractiveness of gold mining stocks.

The last two charts show how gold mining stocks have performed during both the deflationary depression of the nineteen thirties which followed the roaring twenties, and the stagflation driven nineteen seventies.

Chart #1 – Shows that the more negative are short term “real” interest rates, the more attractive is gold as a store of value. The chart below actually ends at a negative “real rate” of about 2% (1-5 yr. treasury rates minus the rate of inflation). The chart shows that the price of gold should be above 2,000/oz. at a negative rate of about 2%, but the current real rate is close to a negative 5% (treasuries are about 0.5% and the trailing twelve month rate of inflation is above 5%). If you extrapolate the chart to a negative rate of about 4.5%, it would  call for a gold bullion price close to $3,000/oz. 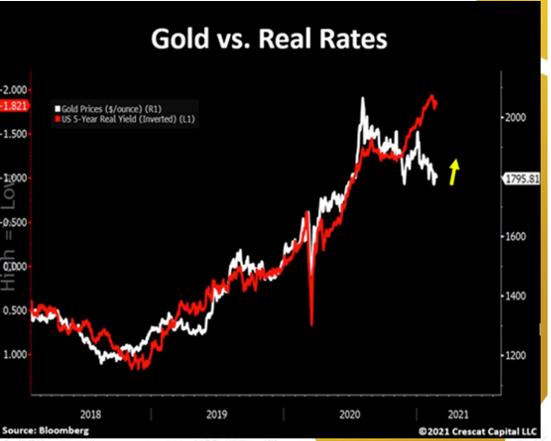 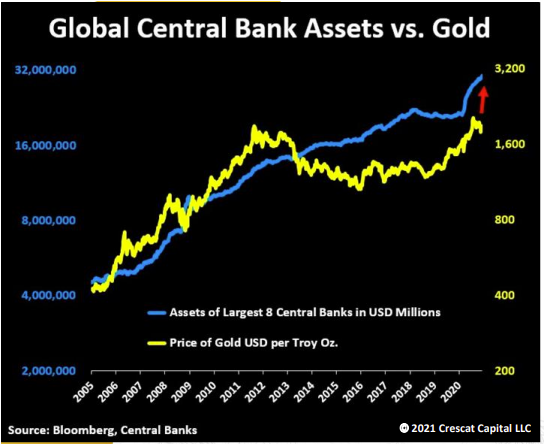 Chart #3 shows how commodities in general are priced at a fifty year low. Though there are a variety of industrial uses for gold, and many observers view gold as a commodity, we view gold bullion as a currency and a store of value. However, commodity prices tend to correlate with the rate of inflation and gold does well during those periods. The chart shows the dramatic rise in commodity prices coming off a similar historic low point, in both the inflationary nineteen seventies, and the Central Bank supported period of 2000-2011. 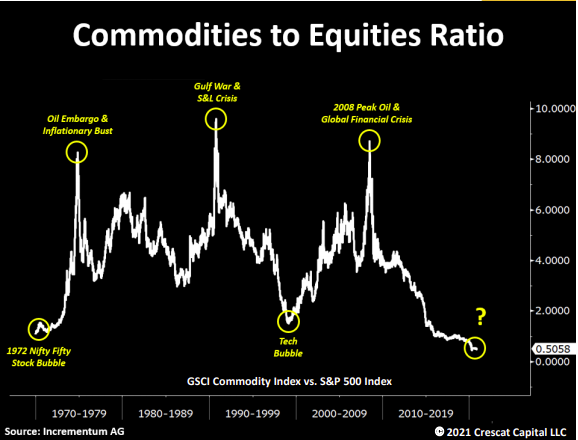 Chart #4 shows how there has been a historic decline in mining exploration, which will naturally result in a decline in the amount of new gold found and then produced. 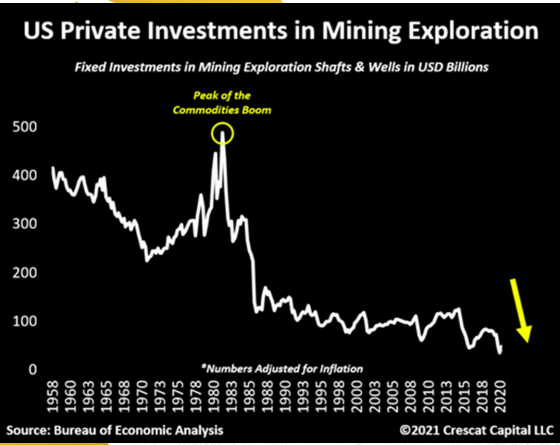 The following chart confirms what was shown in the previous chart. Lower capex results in less new potential production. 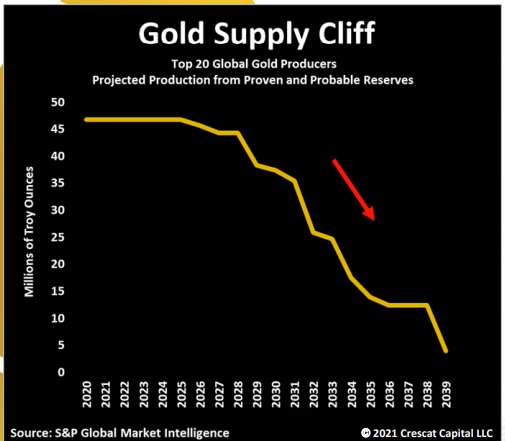 The following chart shows how gold miners’ free cash flow has turned positive for the first time in decades. This is a result of new management teams, in many cases, demonstrating a new level of fiscal discipline. This free cash flow can be used to repurchase stock, establish and/or increase dividends, pay down remaining debt, or expand production by way of acquisitions. A new day has dawned in terms of operating results at gold mining companies. 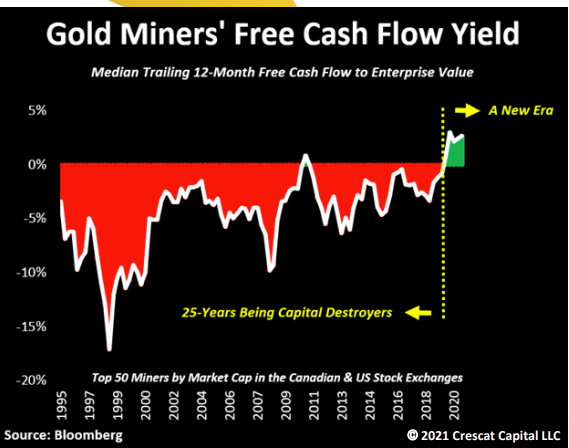 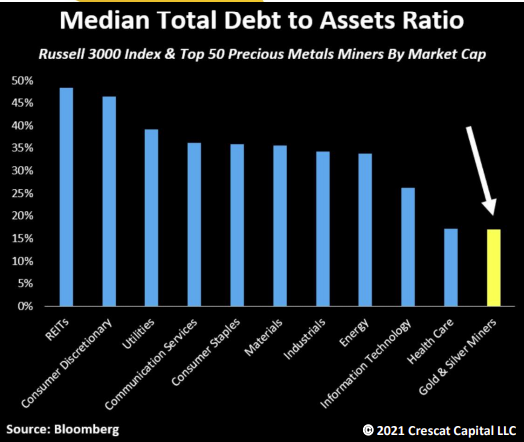 The following chart shows how the gold and silver miners have not only generated record free cash flow but paid back an unprecedented amount of debt in the most recently reported fiscal quarter. 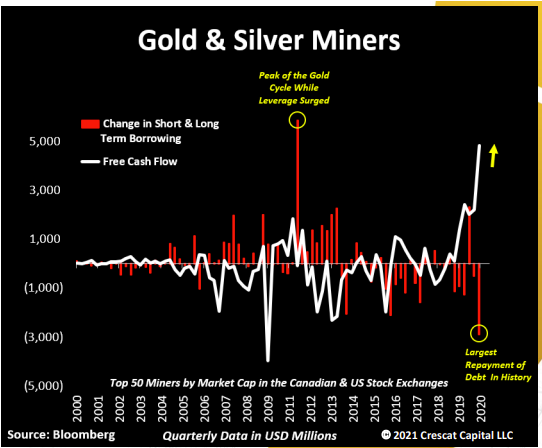 The following chart shows the performance of Homestake Mining, the largest publicly held gold miner at the time during the last several years of the roaring nineteen twenties and the deflationary depression of the 1930s. It is noteworthy that the price of gold was fixed at $20/oz., then raised to $34/oz. in 1934, just after FDR outlawed the private ownership of gold bullion. It is also interesting that Homestake Mining paid out in dividends, between 1929 and 1935, three times its original price in 1929. Lower mining costs in the nineteen thirties helped a lot. 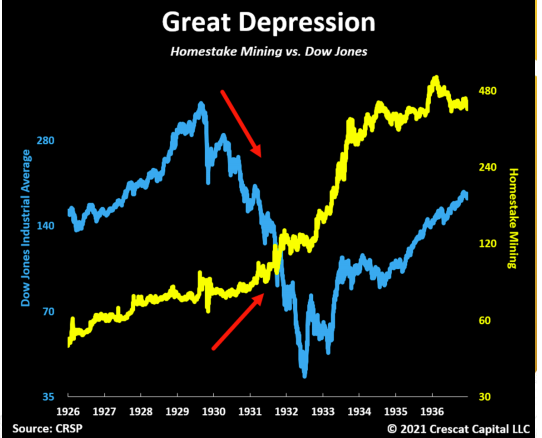 Some of us remember the 1970s, when gold bullion went from $35/oz., after Richard Nixon eliminated its convertibility into the US Dollar, to $850/oz. by January 1980. This chart only goes to 1976, when gold bullion and the gold mining stocks still had a large run ahead. 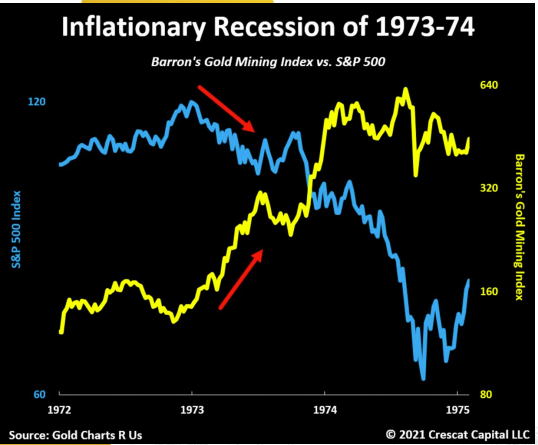 There are many macro-economic factors, relating to gold and the gold miners, that are too powerful to ignore. Gold mining discoveries have been hard to come by, so the limitations on new supply should be a supportive influence. The gold mining companies are the strongest in decades. Free cash flow and unleveraged balance sheets allow for share repurchase and/or higher dividends. Gold mining stocks have been a very attractive asset class both in deflationary periods (1930s) and inflationary episodes (1970s) and should therefore be a material portion of any investor’s long term portfolio.