The general market was firm all month, and finished up for the month in spite of substantial weakness the last two days of the month. Gold bullion and the miners were down modestly most of the month (the miners down about 3% until last Thursday) but then got hit as well. Gold bullion finished the month down a little over 6% and the miners more like 10%. There are always a lot of moving parts but it seems like the major force driving gold and the miners lower was the dramatic increase in interest rates, to be discussed just below.

As most of our readers know, while we continue to be actively engaged within the restaurant industry, the majority of our personal liquid assets are invested in gold mining shares. That takes place within our twenty seven year old Limited Partnership, in which we are both the General Partner and the largest investing Limited Partner. Our writing within this website therefore reflects our two most active financial interests, the restaurant industry and the fiscal/monetary scene.

A SEVEN MONTH CONSOLIDATION IN GOLD & THE GOLD MINERS

It seems to us that by far the most significant recent influence on the price of gold and the gold mining stocks has been the steady rise in intermediate to longer term interest rates. The charts just below show how the price of gold started trending down, almost to the day back in early August, when rates started moving up. As shown in the charts below, while the 2 yr Treasury has moved hardly at all, interest rates from 5 yrs  to 30 yrs have moved steadily higher.

It is important to note that the ownership of gold (which itself pays no dividend or interest) competes in terms of current yield with short term rates (especially up to 5 yrs, 10 at the most), which have moved hardly at all. The two year still yields next to nothing. While the five year Treasury has moved from 20 bp to 60 bp is, this is only a nominal 0.4%, still almost nothing in terms of an annual return though it is a dramatic tripling of that rate. Even the ten year Treasury only yields about 1.5%, a lot less than the inflation rate, so the ownership of gold still has a “real return” over ten years.

There are two major potential drivers of higher interest rates. The first possibility is that the economy is getting a lot stronger and we don’t believe that is the case. The 4% increase in Q4 GDP was heavily influenced by the new stimulus checks, as well as pent up demand as the pandemic begins to wind down. The second possibility is the bond market’s anticipation of higher inflation, and we believe that is more likely the case. The most recent readings indicate a rate closer to 3% than 2% and the Fed is encouraging it. The Fed balance sheet continues to expand with their bond buying, $1.9 trillion of government spending is about to begin (with more to come), a new currency called Bitcoin has created a trillion dollars out of thin air and there are others such as Etherium. Commodity prices have moved sharply higher and a new $15 national minimum wage will contribute to higher retail prices. Lastly, as shown by the last chart below, the US Dollar has been weak, another harbinger of US inflation.

We should remind you at this point that higher interest rates would be very expensive for the US Treasury, since one extra point of interest on $28 trillion is $280 billion, blowing up the annual deficit even further. Though interest “earned” by Fed T’bill holdings is rebated back to the Treasury (after expenses), there are still many trillions of debt owned by individuals and foreign countries. Volker took interest rates higher from 1979 to 1982 to control inflation but the total US Debt was about $1 trillion then versus $28 trillion today, and the annual defict was about $100 billion versus $3- 4 trillion today. Unfunded entitlements was also a non-factor forty years ago while it is a hanging “sword of Damocles” today. Today’s economy is 7.5x the size of that in 1980, but the debt and the deficits are almost thirty times the size, excluding unfunded entitlements.

We’ve had higher interest rates (both short and longer term) reflecting higher expected inflation along with a sluggish economy before. In the 1970s gold went from $35/oz to $850/oz while stagflation took the Fed funds rate to 18%. Therefore, for all but the shortest term stock traders, negative real returns on short term US Treasuries (up to at least 10 yrs) remain a fact of life and gold related securities retain their allure. Our thesis remains very much intact. 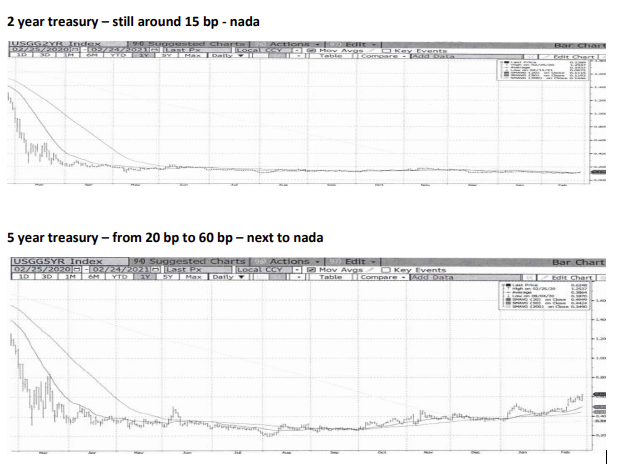 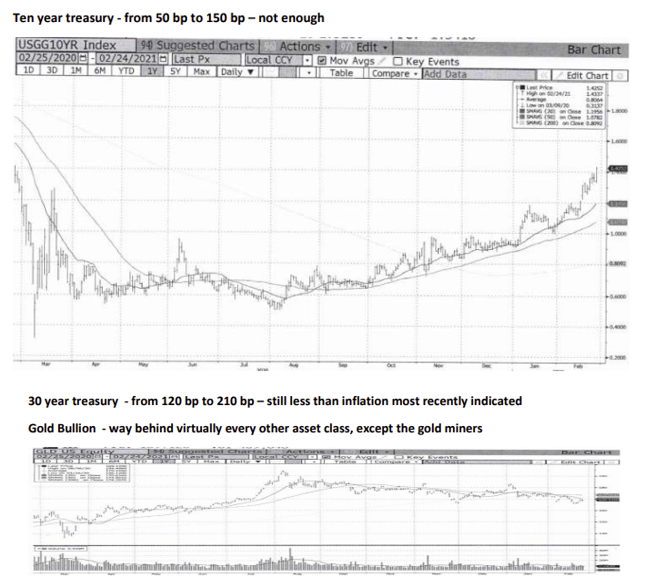 Following the money in and out of Washington, DC: At this point, with foreign purchasers of US debt issuance backing off, our Fed Reserve is purchasing over 60% of newly issued US Treasury securities with new money printed out of thin air. The US Treasury sells the bonds to the Fed, pays interest (at low rates) and the Fed rebates their annual “profit”, derived from interest “earned”, after expenses, to the Treasury. The net effect is virtually a zero-interest cost on unlimited new capital and the Treasury doesn’t even have to issue colored paper. We listened last Wednesday to a congressman congratulating Fed chairman, Jerome Powell, on the Fed’s rebate of $88.8 billion for the year ending 9/30/20, which reflected the Fed’s “profit” after deducting $4.5 billion of operating expenses. This is noteworthy because (1) the $88.8 billion was generated from interest earned on the now $7.5 trillion balance sheet (created out of thin air), consisting largely of US treasury securities and (2) The annual US operating deficit is reduced by this $88 billion. (3) It costs US taxpayers four and a half billion dollars to manage this scheme. And there is no graceful way out of this mess.

THE REALLOCATION OF RESOURCES

As we wrote on this website two weeks ago, suppressed interest rates are a form of price fixing, and price fixing inevitably leads to the misallocation of resources. After the “revolution”, which will likely be financial, political and social, the sun will still rise in the east and set in the west. Life will go on, but the assets will have been reallocated among owners.

We have been fundamental value investors for over four decades and it has served us well over time. There have been successful investors that invest based on chart patterns rather than the corporate fundamentals, and that can work well for short term nimble traders. We believe, however, that, while charts can sometimes alert investors early to changing fundamentals, the charts reflect the fundamentals, not the reverse. We try to follow the advice of legendary investors like John Templeton, who suggested that you should buy “when there is blood in the street” and sell into broad euphoria.

We cannot predict when the general stock market enthusiasm for SPACs and Bitcoin and technology companies selling for 50x SALES will run its course. With that backdrop, the gold miners trade at an Enterprise Value versus EBITDA (operating cash flow) of under 8x versus the S&P 500 index of double that and the spread is the widest in at least 10 years. Gold is the “real money” and the gold miners are storing it for us within their underground vaults (called gold mines). They will bring that currency north to exchange it for the colored paper of the day over time, and that will be reflected in the dividends paid and the price the shares trade for. There are lots of ways to protect oneself from the financial turmoil we foresee. In that context, mining stocks are the most undervalued asset class we know of and should therefore be a meaningful portion of an investor’s liquid assets.