From a MACRO FINANCIAL STANDPOINT, the recent volatility within stock and bond markets is indicative, not only of the inflationary trends but the level of public confidence that our banking officials (public and private) can control the situation. The ratio of bank assets to equity is a good indicator of risk, since the difference between the two is the “leverage”. One subject institution had Assets of 24x its equity base in 2007, high leverage by most standards, By 2011, as a result of the ’08-’09 financial crisis, this measure had doubled to 48x.  Today the Assets are two hundred twenty times (that’s 224x) the capital base. It is noteworthy that if the assets, consisting of fixed income securities, were marked to market, the capital base would be wiped out, so survival would be in question. That particular institution is your friendly Federal Reserve, the central bank of the USA. It would be wise to keep this in mind as Chairman Jerome Powell describes how the Fed will take all necessary measures to bring 7% inflation rate back to just over 2%. It wasn’t long ago that “transitory” was a popular buzzword.

A NEW STOCK MARKET DARLING has emerged, namely BLACK RIFLE COFFEE COMPANY (BRCC). A merger took place on February 3rd, between BRCC and a SPAC called SilverBox Engaged Merger Corp. (SBEA), which raised $345M about a year ago. The structure is relatively unique compared to most SPAC business combinations because, not only is BRCC management remaining in place with voting control, but Engaged Capital (part of the Sponsor group) invested $100M at $10.00 per share, the original IPO unit price. BRCC now has about $150M in cash on the balance sheet, and about 183M shares outstanding. Subsequent to the NYSE listing on 2/6, BRCC has run from $10 to $16, so the valuation, net of the cash, is $2.8 billion. At about twelve times TTM revenues, with no earnings yet, “stock market darling” is not an overstatement. More fully described at www.rogerlipton.com, BRCC was founded in 2014 by an ex-Special Forces Green Beret, Evan Hafer, who started the business by roasting 500 pounds of coffee in his garage with a corporate mission to benefit military veterans and their families.    More than half of the 400 full time employees are military veterans, with 10,000 expected to be employed within ten years.   Omni-Channel Revenues were $230M in calendar ’21, expected to double in the next two years, with positive earnings and cash flow in ’23. Revenues are generated (Direct to Consumers, DTC) through a rapidly growing network of 270,000 Coffee Club subscribers and over 2M cans, monthly, of Ready to Drink (RTD) beverages, also sold Wholesale through over 35,000 retail stores that include Walmart, CVS, 7-Eleven and many others. The newest segment, expected to grow the fastest, is a chain of Black Rifle Coffee Company OUTPOSTS, 2,500 – 3,000 square foot facilities that sell coffee products as well as Black Rifle apparel and accessories (48% of sales). There were 8 company and 8 franchised Outposts operating at 12/31/21, expected to grow to 53 company and 25 franchised locations in two years. The targeted annual revenues per store are $2.5M, with a 45 % cash on cash return on the $1.4M investment per store. Beyond the $460M of projected revenue in ’23, there is obviously a very large addressable market for all three segments (DTC, Wholesale Distribution and Outposts) of BRCC activities. The “story” is compelling, with a loyal customer base reinforced by the corporate mission. The valuation of BRCC is more like that of a “cloud” or “cybersecurity” investment, but the BRCC product is, after all, addictive and the concept has clearly touched a nerve with consumers. There are, naturally, operational risks, but we see nothing fundamental that sheds doubt on the likelihood of success. The stock will no doubt be volatile and the valuation discounts a great deal of future progress, but the good ones are rarely cheap.

PUBLICLY HELD FRANCHISEES DON’T GET THEIR DUE – In my four decades of financial (and operating) involvement in the restaurant industry, franchisees hardly ever get useful valuations. This under-valuation, therefore, does not allow for stock ownership to incentivize employees or the company to raise inexpensive capital. This observation goes back to the 1980s, when the popular Chi Chi’s Mexican dinner-house chain had public held franchisees, Kelly Johnston and Consul Corp., the latter with an outstanding CFO by the name of John Hamburger😊 Our work recently regarding 2,200-unit Arcos Dorado (ARCO), the McDonald’s franchisee in South America, reinforced this observation. The other franchisees that are public today are Carroll’s (TAST) the franchisee of over 1,000 Burger King’s and 65 Popeye’s, and Meritage Hospitality Group (MHGU) who franchisees 345 Wendy’s. TAST trades at about 6x TTM EBITDA, less than half of Burger King’s owner, Restaurant Brands (QSR). MHGU sells under 8x TTM EBITDA, about half that of Wendy’s (WEN). We can’t make a compelling investment case for TAST, because the Company is heavily in debt and Burger King is something of a work in progress. Meritage (MHGU) barely trades, so its appeal as in investment is academic. Arco Dorados (ARCO), on the other hand, at about 7x TTM EBITDA, is selling at too large a discount to McDonald’s at 18-22x (with or without capitalized leases). ARCO has a strong balance sheet, has plans to renovate and build (with more drive throughs), so higher earnings and cash flow are likely. Over half the stores are in Brazil, so currency risk exists but, on the other hand, a meaningful dividend ($0.20 annually pre-Covid) could be re-established   We don’t suggest that ARCO’s multiple of earnings or EBITDA will approach McDonald’s but the gap (7x:20x-midpoint) seems too large right now. 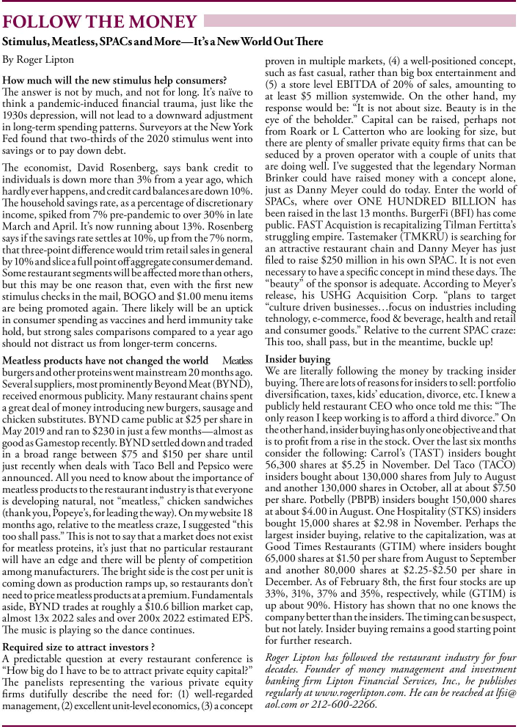