THE WEEK THAT WAS: ENDING 4/14 – WITH ONLY BFI (BurgerFi and Anthony’s) REPORTING, CITIGROUP TEAM CATCHES UP WITH RATINGS, AS DOES M.STANLEY, GORDON HASKETT AND KEYBANK

With a lull in quarterly reports, many companies due to report later in April and May, so analysts take the time to refresh ratings. 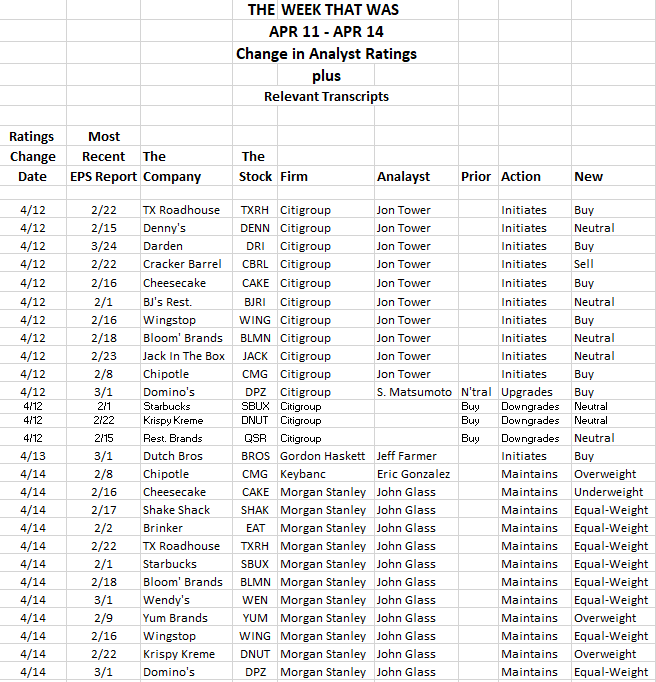 The team at Citigroup, led by JON TOWER, initiates Texas Roadhouse, Darden, Cheesecake, Wingstop, Chipotle and Domino’s at BUY.  They initiate Denny’s, BJ’s, Bloomin’ Brands, Jack in the box, Starbucks and Krispy Kreme at NEUTRAL. They initiate Cracker Barrel with a SELL and also Downgrade Starbucks, Krispy Kreme and Restaurant Brands to NEUTRAL.

Readers can access the most recent conference call transcripts by way of our CORPORATE DESCRIPTIONS, accessible from our HOME PAGE.

NEXT WEEK: Only BJ’s reports, after the market on Thursday, the 21st. A bunch of companies report the following week.